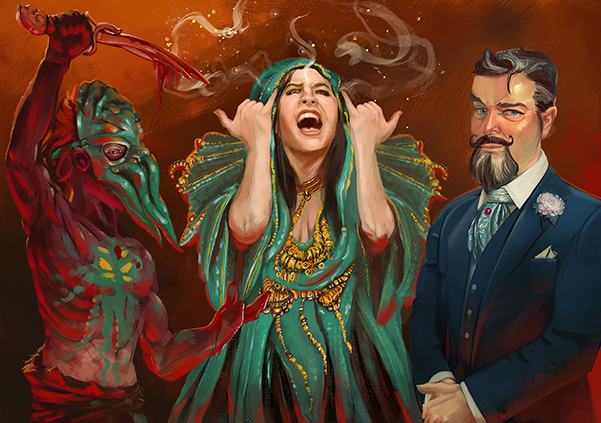 The cult is an important part of the Cthulhu Mythos mystery ecology, Cultists leave the clues that the investigators find to figure out what’s going on. They provide the soft resistance that can be defeated. Cthulhu may be immortal and powerful but the cults can be stopped providing one more day of life for everyone on planet Earth. But by the time the investigators get on their trail, most cults are evil, insane or a little bit of both. How do people decide to worship Cthulhu? How do they pay for those robes and other accessories? What if they were recurring protagonists rather than simply led away in handcuffs at the end of a case? Cults of Cthulhu from designers Chris Lackey and Mike Mason takes a deeper look at this essential element of Call of Cthulhu. Chaosium sent along a review copy. Is this book full of good ideas or did it leave me dead and dreaming? Let’s play to find out.

The book opens with a history of known Cthulhu cults. Some of these are from Lovecraft’s stories, some of them are from Chaosium adventures and some of them are fresh for this book. Cult is also applied liberally here, as some of the entries include serial killers, a prog rock band and a poor guy in Montana whose dreams of dread Cthulhu led him to built a roadside attraction of the legendary creature from 50 feet of old tires. We’ll see some of these cults again in this book but already it's providing interesting hooks for Keepers along with examples of cults that aren’t the usual shadowy robed figures.

There’s also a discussion of a concept that goes through the entire book. Are Cthulhu cults individual branches or are they branches of one big cult? The ultimate answer from the book is that it’s up to the individual Keeper. This might seem like something of a cop out but each approach has some merit. Individual cults open up stories about rivals fighting each other for power and give investigators a chance to play bad guys against each other. A unified cult provides a hierarchy to knock over with investigators working their way up to the so-called “Deathless Masters” that run the whole affair. The book even provides an example of such an individual from the game’s history: Carl Stanford, the antagonist of Shadows of Yog-Sothoth.

The book zooms in on five cults. The Louisiana swamp cult from Call of Cthulhu is detailed as is the Esoteric Order of Dagon from The Shadow Over Innsmouth. There are three original cults, one of each of the major eras of the game. The Elevated Order of Morpheus is a Victorian era secret society full of degenerate nobles. The Society of the Angelic Ones is a California cult from the Roaring Twenties that started out as a scam and got too real. The Church of Perfect Science threatens the modern day as a self-help organization that changes its top level members with alien technology. Each write up comes with personnel, goals, story hooks and suggestions on how to modify the cult for a different era. Of the new cults I found the Church of Perfect Science most interesting. Not just because it's a thinly veiled riff on Scientology but because it can actually help the investigators at first! All the goofy machines and talking therapy can give folks back small bumps of Sanity…until they learn the truth about the church and they start losing gobs and gobs of it.

I thought the chapter on creating a cult was very well done. It combines the random tables of modern OSR design with some solid discussion on the logistics of running a cult. Keepers are asked to build the leader, consider where their power comes from, what sort of things they get from Cthulhu in exchange for their worship, and so on. Then there are discussions about the broader cult, such as where they do their rituals, how they stay under the radar of the authorities and other excellent discussions that even long-time Keepers might not have considered.. This chapter seems to be making the argument for a Cthulhu cult as a running antagonist in a campaign rather than just going out in a blaze of glory after one investigation.

The book rounds out with a short campaign of adventures featuring the new cults detailed earlier in the book. “Loki’s Gift” centers around the Elevated Order of Morpheus dallying with the demimonde of the artistic community of London and trying to put on a cursed play (no, not that one). “Angel’s Thirst” drops the investigators into 1920s LA on the hunt for an artifact that’s being sought by several different factions. “A God’s Dream” puts the investigator in the all too familiar role of following up on someone that’s gotten in over their head with the Mythos. Of the three, I enjoyed “Angel’s Thirst” the most because it mixes the elements of classic era Call of Cthulhu I love very well: iconic historical locations, gangster getting sucked into the Mythos and a climactic ritual that will have players scrambling to survive. Though "A God's Dream" was also very good and could easily be adapted to a Delta Green op.

Cults of Cthulhu is a fantastic book for Keepers of any Mythos game. It encourages thinking for the long haul rather than the usual case by case episodic bases.

If you found this review helpful, please consider purchasing this game from the affiliate links embedded within.
Click to expand...