Build Better Worlds Together With Arium 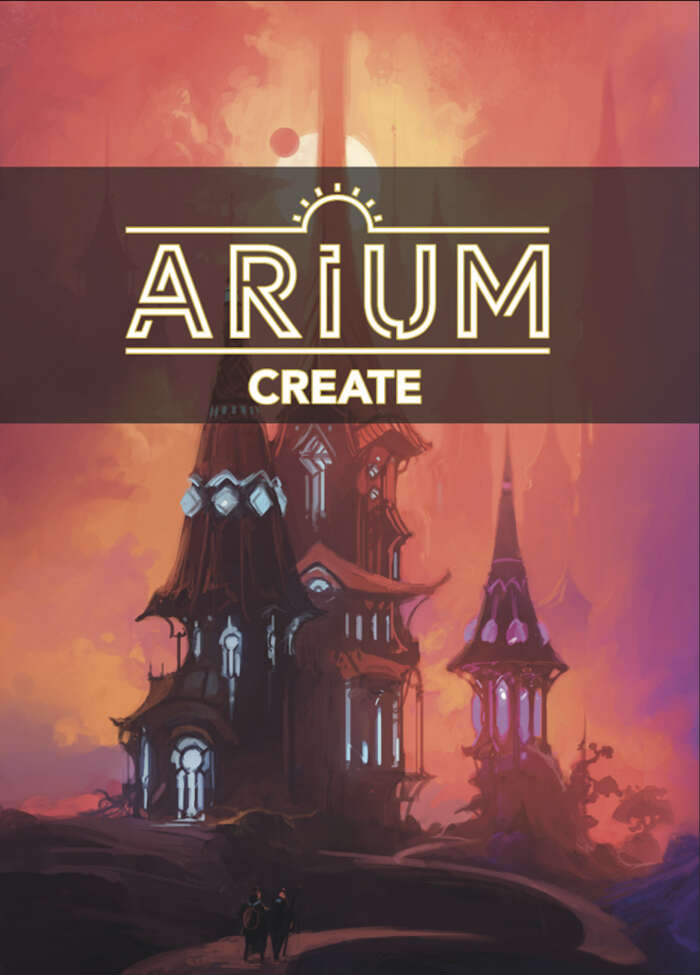 Worldbuilding is generally considered to be the responsibility of the Game Master. Either they’ve labored away at hand crafting a world for the campaign or they’ve done all the research and read as many setting sourcebooks as they could. Many modern games have moved toward shared creation at the table, whether it’s the small tidbits of Blades In The Dark fleshed out in play to Powered By The Apocalypse playbooks that give players an opportunity to create a whole organization to support their character. There are even a few games where world building is central to the gameplay itself. The most famous of these is Microscope by Ben Robbins but the designers at Adept Icarus have built their own variation called Arium. The first book in the series, Arium: Create, focuses on world building at the table. The company sent along review copies of Arium:Create and Arium: Discover. Did these books inspire strange new worlds or send me back to my dog eared campaign notebooks? Let’s find out together.

Arium: Create is a full color digest book designed by William L. Munn, Natasha Ence and Drew Gerken. It’s written in a fairly breezy tone and opens with a discussion on the origin of the series. The designer is a corporate trainer in their day job and the techniques discussed within stem from those sessions. The two main tools he discusses using are big black markers and standard size post it notes. These aren’t just aesthetic choices. The black markers make it easy for everyone to read what’s being written and the post-it note forces writers to be brief. Brainstorming is about big broad concepts. They’ll be time for digressions about fantasy coinage later.

The process runs in seven cycles. Each cycle focuses on one main concept, with successive turns drilling down into specifics. Everyone writes down a number of concepts on their post-its under a time limit of a few minutes. Once the time is up, the post-its are collected into groups based on similarity. Then players have a number of votes they can use to advance the ideas they like the most based on how many different ideas are out there. The process starts with genre, then moves to people, then culture and so on. Consensus is key, but there are also rules for veto power as well as marking specific elements for a specific player’s development.

This process gives Arium: Create a writer’s room feel as people set down ideas, throw them on a whiteboard and then see what sticks. Grouping concepts to set the final vote count is a very clever way to keep each round fresh. It shows popular ideas but also leaves room for tables to do something unusual if someone puts out that killer concept. It also seems eminently scalable. Microscope is great for epic sprawling settings full of big historical moments, while this could easily be used for smaller stuff like an office setting with the right guidance from the facilitator.

The facilitator’s role is key. While everyone has a voice at the table, the facilitator keeps the process moving and resolves any disputes between creators. This isn’t entirely GM-less play, and I would have liked to have seen a little more discussion from the designers on how to handle that person who just won’t let their pet idea go.

Once the world is ready to roll, Arium: Discover offers a set of rules to play a game. It features a d6 dice pool with success based on how many dice come up a 5 or 6. If more than one die is a 6, the player can seize narrative control and add an unexpected benefit. If more than one die is a 1, the GM injects an unexpected complication. These elements happen outside of success or failure, which I found was an interesting way to do it.

There is also some discussion about Discovery Tokens, which function as the metacurrency you might expect in a game like this. Players gain them when they fail a test enhanced by a quality, which is an element that adds dice to a roll beyond their attribute such as a skill, gear or advantage.The tokens can be spent for an automatic success before a roll (without the possibility of a complication or control benefit), add successes after the roll with players narrating how they came up short at first and then adjusted, and add details to the world. GMs can adjust how many tokens players can spend or start with for more gritty or cinematic worlds, but an upcoming book, Arium: Evolve, promises more specific advice for genre emulation.

Arium: Discover is a solid light narrative rules set. It’s designed to get players quickly playing in the shiny new world they’ve just made using Arium: Create. Tables who already have a rules set they love like Fate or Savage Worlds could just as easily use the first book to make a world for that set of rules.

The Arium series offers a flexible system that shows the joys of sharing world creation with the entire table. Tables that want to share the GM’s burden should check them out.
Last edited: Apr 8, 2022
Click to expand...

This reminds me of Aria (Worlds) from Last Unicorn Games, almost 30 years ago...

Arium: Create is pretty neat. And best part is, you can use with D&D or any other game system really.

Although, getting your average D&D Dungeon Master to SHARE worldbuilding with the rest of the table like that . . . . it certainly makes for a different kind of experience.

Cergorach said:
This reminds me of Aria (Worlds) from Last Unicorn Games, almost 30 years ago...
Click to expand...

My thought exactly, though Aria suffered from a lack of organization and this sounds very actionable.

A Review of The New Hunter The Reckoning
2