The artist Darlene, who designed one of the original TSR logos that TSR3.5 is currently using, has emphatically and publicly refused to endorse the company's use of the logo. 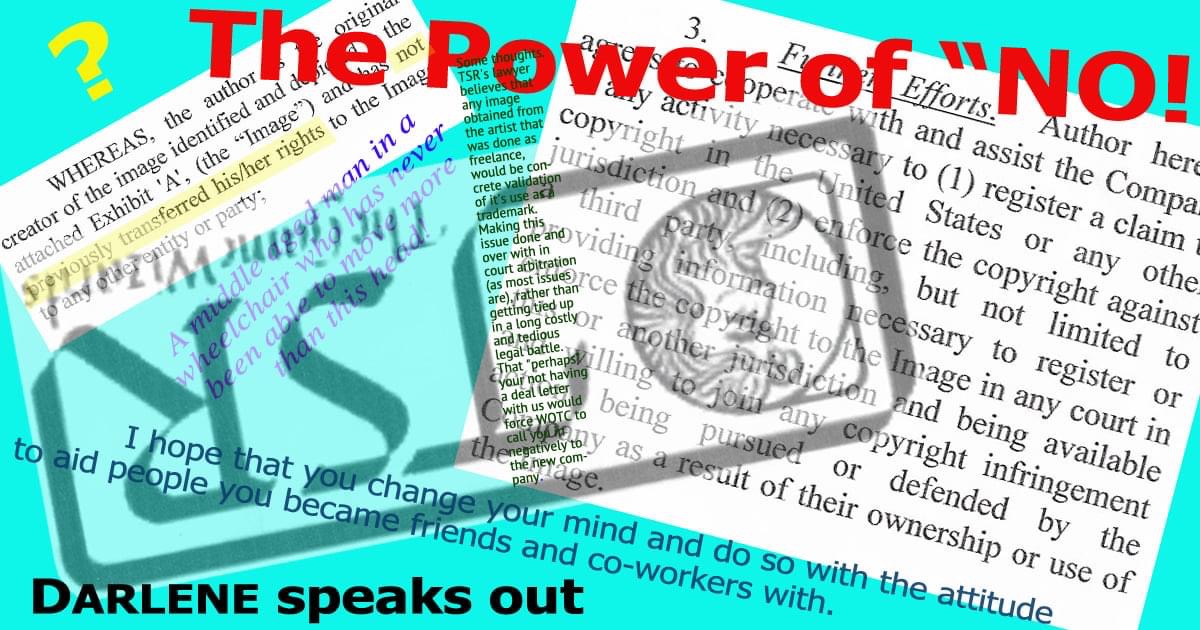 In December, I finally reviewed the contract Justin LaNasa (JL) wanted me to sign. That’s when I took a stand and gave this answer: “I prefer not to be directly involved in any way with your lawsuit against WOTC. Therefore, I do not give permission to use the Wizard-head logo."

For the longest time, I tried to remain neutral, aloof, and unaffected. I wanted to avoid being associated with the bombastic claims of the new TSR.

JL first responded with a denial: “We were not planning on having you in the lawsuit this is why we ask for your permission.” Then a guilt trip: “We really tried to bring back something good with TSR.” Then played the underdog card: “it seems like WOTC and their supporters have a lot of fear and sway amongst the industry.”

It’s upsetting if JL thought I would be stupid enough to sign a contract without reading or comprehending it. In my response, I referred him to item #3 which obligates me to defend his position in his WOTC lawsuit.

The pressure they are putting on me to reconsider has increased. Ernie Gygax thinks granting my permission for them to use the logo—which, btw, they are already using anyway—is key for their successful arbitration. He intimated if I don’t give in, sign away my rights and take their money, I’d be hurting some people I really care about. He also suggested I can “up the ante” for double the amount initially offered.

JL has since amicably proposed to work out a contract that excludes me from the lawsuit. He’s been very nice and cordial to me throughout. Nevertheless... The contract will most likely retain the first sentence where I declare that I have “not previously transferred my rights to any entity or party.” What? As I understand it, logos don’t work that way.

The most important thing to me has not been addressed. As a visual thinker and logo designer, I am very particular about the nuances of what I create. Yes, I designed the original wizard-head logo back in the ’80s. That is not in dispute. However, the logo produced as “Exhibit ‘A’” in JL’s contract is not my logo. It’s a bastardization—a greyed-out, fuzzy, lesser version—of what I designed. I detest the spindly letters used for "The Game Wizards." Ugh!

Therefore, I cannot honestly take money for it because I do not and will not claim it as mine. I’m extremely picky about choosing my clients. Before I would consider designing a new logo for the new TSR, they would have to demonstrate ethical behavior as a business entity.

Ever since they appeared on the scene, the new TSR has been plucking the heartstrings of those who fondly remember the good ole days when the hobby was in its infancy. JL’s lofty words: “to honor and remember TSR, the Dragon, Gary and all the alumni of the old days of gaming” sound inspiring. But I remain unmoved. I never want to return to Lake Geneva to relive those “good old days."

If I were to endorse the new TSR, they have to correct the mistakes of the old TSR. They must be kinder and more generous to artists and authors in their employ. They would show proper respect, listen to, and honor women, both within the gaming field and as consumers. They would be more inclusive and sensitive enough to address the needs of individuals beyond the white male demographic. They would be fair to their customers and transparent in their actions.

Besides, the idea of me endorsing TSR—new or old—is laughable. Not always, but in general, I did not have a positive experience freelancing for TSR. Looking from the outside in, I witnessed how the growth spurts of TSR turned it from being an “all-for-one; one-for-all” company into an uncaring corporate entity with an “us vs them” mindset. With few exceptions, success brought out the worst in those TSR people given positions of authority. I witnessed how the creatives got the brunt of TSR’s unfair predatory policies. No, I do not yearn to return to that stressful, hostile, and toxic atmosphere.

My memories of TSR are clear because they are frozen to the time I needed to leave Lake Geneva for my own mental health and well-being. I turned my back on the growing number of small-minded TSR people who created and spread malicious rumors and hurtful lies about me, made me feel unwelcome whenever I visited the building, told me my art was not very good and caused me to doubt myself and my abilities.

I left to pursue knowledge, my MFA, and the prospect of new beginnings with no intention of returning. Gary Gygax contacted me in 2005 and coaxed me back. That’s when he and I became fast friends. In the years since, I’ve discovered—for the most part— nothing much has changed for females in the gaming world (ie: gamergate). TSR’s unfair internal practices (abusing creatives financially) seem to have followed the RPG industry. How do I know? Having worked as a professional in the “real world” since 1984, I’m aware of the many disparities.

Today, I decided to publicly share my “power of no” because I recognize this as a teachable moment for the dispossessed. Charged with 42 years of suppressed emotional pain, my “no” is big and empowered. It includes “no” to bullying and unethical business practices; “no” to the unfair treatment and compensation of artists, creatives, and women; and “no” to taking advantage of the disadvantaged to profit at their expense.

My “no” is also cathartic for me. With it, I officially reclaim those lost parts of myself I abandoned so long ago. To have the courage to take this stance, my desire for money had to be relinquished. Only then could I clearly understand the implications of what saying yes meant. As tempting as a yes would be, it is ultimately disempowering.

Compromising my integrity for money is the same as selling my soul.

Therefore, I choose to continue living like I always have, modestly. I choose not to allow temporary feelings of desperation or depression to rule me nor compromise the greater truth of who I am. Perhaps I should credit JL for catalyzing my healing process and helping me demonstrate what feminine power looks like.
Last edited by a moderator: Jan 7, 2022
Click to expand...

Jer said:
Sartre on First - the RPG of existential baseball
Click to expand...

Sartre on First could just be an existentialist take on any RPG:

You all meet in a tavern—with sparse, unremarkable furnishings. No one shows up to give you a quest, and there are no NPCs to interact with. Instead, you do 2 hours of straight RP, in which you infodump your characters’ edgy backstories.

There is one door to the tavern, which can be opened with a DC 0 Sleight of Hand check—but you cannot leave until another PC uses the Help action to help you accept that your character flaws are entirely of your own making.

You can cast Plane Shift to travel to Hell, which is just more people.

LordEntrails said:
This argument is so bizarre to me. It's like saying 'You haven't been using your beach house so I moved in and it's mine now. You have no one to blame but yourself that it's mine now.'
Click to expand...


On the other hand, it works exactly like that in certain jurisdictions. It takes generally a long time (often decades) of unchallenged behaviour as the beach house's legitimate owner and an amount of good faith in claiming it was abandonned. Read about "acquisitive prescription" (or "adverse possession" or "usucapio") if you're interested in the details.
Last edited: Jan 13, 2022

Audiomancer said:
You can cast Plane Shift to travel to Hell, which is just more people.
Click to expand...

Specifically, French people (at least according to Red Dwarf).

Galandris said:
On the other hand, it works exactly like that in certain jurisdictions. It takes generally a long time (often decades) of unchallenged behaviour as the beach house's legitimate owner and an amount of good faith in claiming it was abandonned. Read about "acquisitive prescription" (or "adverse possession" or "usucapio") if you're interested in the details.
Click to expand...

Sort of. As you say, they normally have to live there for at least ten or twenty years. Depending on the jurisdiction, they may also need to have a deed and/or pay property taxes on it.

HammerMan said:
wait why is Jennell not a bigger more well known name then? this is the first time I remember her coming up and I have been in the gaming community since the early 90's
Click to expand...

You probably know her by her dead name, Paul Jaquays.

Is she ok with posting the actual name in question though? Unless you are sure, you should probably edit that...

I mean, we call them "deadname" for a good reason

I believe she posted that one could refer to her older products as "[Title] by Jennell Jaquays, writing as Paul Jaquays" treating it like a pen name, but calling out her true name.

Edit: Here it is: See the 8th comment on the following page: Thought of the Day – Deadnames

nightwind1 said:
You probably know her ...
Click to expand...


I hope others have pointed this out, but Jennell Jaquays is in the very select company of the "Origins" (Academy of Adventure Gaming and Design) Hall of Fame, inducted in 2017.

If you haven't seen it before, you should-

Hall of Fame — The Academy of Adventure Gaming Arts & Design

Galandris said:
On the other hand, it works exactly like that in certain jurisdictions. It takes generally a long time (often decades) of unchallenged behaviour as the beach house's legitimate owner and an amount of good faith in claiming it was abandonned. Read about "acquisitive prescription" (or "adverse possession" or "usucapio") if you're interested in the details.
Click to expand...

In my country you can even claim it in bad faith if enough time happens.

Yes, please do not post peoples' deadnames. Jennell in particular is very well known in these parts

Publisher
As mentiond upthread, I was lucky enough to have Darlene do the title for me for my current project. I think she did a great job.

See Justin? That's how it's done. You don't steal a logo, bastardize it and try to pass it off as yours, and then try to strongarm the artist. All you needed to do was reach out to her to create a new one for you. She's a wonderfully nice person, and incredibly professional.

TSR Why I still love the Real TSR
2

Yesterday at 7:16 AM
Dannyalcatraz