Describe your last RPG session in more than 5 words.

Describing your last RPG session in 5 words is fun, but it really makes me want to share the other bits, as well. So I'll start.

Last session, in the post apocalyptic future of 2012, our three geriatric heroes (recently awakened from a cryogenic sleep that we entered in the 1980s) fought our way into a parking structure that was serving as a base for alien reptoids who had some next level Predator cloaking technology (luckily, Sir Simon Milligan has spooky vision that allows him to see invisible things).

We hotwired a car, mowed down several reptoids, then were joined by a horse-riding, six-shooter toting, George Dubya as we blasted our way further into the compound to rescue a kidnapped (and very cute) goat/boy hybrid in exchange for both information and secret CIA crack (which is a spell reagent).

We left off with our heroes (as well as Dubya and Billy, the goat boy) getting ready to jump from the roof of the parking structure to the roof of a neighboring building! Which isn't at all safe activity for 70+ year-old men. Do our heroes survive?!? Find out next Thursday, in this very thread!
Last edited: Apr 16, 2022

Having been beating the snot out of them, finally a chance for them to hole up and heal up... And, at the same time, give them a new job...

A ninja, knight, and white mage lose track of their bard in the lair of the antlion. Conveniently class-appropriate gear is found in the chests, and the captured dragoon fails to negotiate his release. A monstrous turtle falls to the attacks of the hero-party, but the fate of the four tiny mages, holding the bard hostage, will be determined next session...

GMMichael said:
A ninja, knight, and white mage lose track of their bard in the lair of the antlion. Conveniently class-appropriate gear is found in the chests, and the captured dragoon fails to negotiate his release. A monstrous turtle falls to the attacks of the hero-party, but the fate of the four tiny mages, holding the bard hostage, will be determined next session...
Click to expand...

Well, Final Fantasy IV didn't have hobbits. Nor Willow. But it did have these ornery buggers: 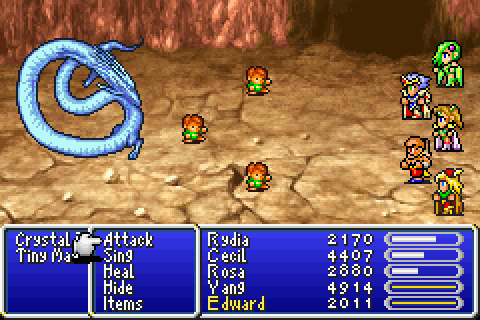 The party fights and wins a silver key from a Bone Golem and a bunch of skeletons, gets a Haste on the main fighter accidentally through a miscast spell, then charges off looking for a fight so as not to waste the Haste!

Encounters and deals with (dismembers with extreme prejudice) a bunch of zombies in monks' cells, then has an animated statue turn one of their henchmen to stone. Thankfully they were able to fix that with Hexbreak.

Then they found a secret stairway into the dungeon of the castle, followed it down into an alchemistry laboratory where several party members were put to sleep by a trap involving black lotus dust, but the others were able to break out of one of the Wizard-locked doors, and gradually retrieve the unconscious ones, using a combination of careful thinking and anti-poison measures. Several vivid magical dreams were successfully Saved against and thus did not come true, including one which would have been instant death, and another which would have gained the dreamer a level!

Carefully exploring the dungeon with the aid of a magical astral projection spell, the party presses on into an unnaturally cold hallway with a multitude of small doors in the walls...

When we left off, our geriatric heroes, one Dubya, and one Billy (the goat boy) were leaping from the roof of a parking structure to the roof of a neighboring building to escape the onslaught of the reptoids. All made the leap but one, Walter, who was captured by the reptoids. Another, our resident frogman (he's a literal frog/man hybrid), Jean-Pierre, was grievously wounded.

We gathered our elderly selves up as we fled for our lives (as fast as senior citizens can flee), only slowing down when we were certain that we were no longer being followed. After a rest, GW made good on [part of] his promise, leading us to an overgrown city park where the golden child, Leo, used a special tool to open the gateway to the Parks & Rec pocket universe at the center of the world.

When we arrived in the decrepit former home office of Parks & Rec, we were surprised to be greeted by Walter and Brother Bill (a cult leader from earlier in the campaign), the latter of which revealed himself to be a creation of The HORDE. The HORDE was our faceless adversary for the last six game sessions or so (we learned of the HORDE's existence prior to the flashforward to Hellscape Earth).

Now, we were at last face to face with our foe.

The HORDE was revealed to be a giant Venusian super computer that was left behind by the Venusians when they left Earth at the height of the Mayan civilization. Now, the HORDE (which can create living beings) is trying to repopulate the earth. And we have to decide:

All the hats bite! Hard!

They begin the fleeing back to the Fort, their APC having been taken out by a Krokodile drop ship.

They take out a couple dropships - those smartguns really smart... they took out a Sgt I. took out several. But he also ran out of ammo after a spray and pray...

They make it to the fort...
Act 3 begins

In they go... and they find a fire on sublevel 1, and sublevel 2 is blocked... and has epoxy everywhere... and people epoxied to the walls.
WO Chaplain puts the poor sods on the walls out of their misery... but one was ripe. So a facehugger goes after Sgt I.
And we find out Sgt I's player has his voice go up a bit when his character must save or die...
Wed Star Wars
Lowhhrick gets challenged... ah, the price of a known name. So, back to gladiator stage on Nal Hutta... Two short fights... two foes going down with head ringers...

Tell me and you move.


I hope the doctors get you fixed up quickly.

jdrakeh said:
I hope the doctors get you fixed up quickly.
Click to expand...

Oh! The Monster of the Week campaign ended last night with an epic battle against Dubya, the demon steed Dick, 20 goatmen (and Billy), as well as one raging mad sasquatch! We decided to fight through them FOR THE HORDE! We managed to power on the HORDE's windmill energy reserves, provide him with a sample of the dying frogman's DNA, and set course for the future of Earth (as a frogman colony planet).

We went shopping in the city and had to fight a runaway Alchemical Skunk, Then later we all shared the reward from that - a lucid dreaming potion - so we could deep-dive into the dream realm, and use my Risen character's memories to solve his murder.

WayneLigon said:
We went shopping in the city and had to fight a runaway Alchemical Skunk, Then later we all shared the reward from that - a lucid dreaming potion - so we could deep-dive into the dream realm, and use my Risen character's memories to solve his murder.
Click to expand...


Ooo. I love a good murder mystery, and that sounds fantastic!

We are playing the AD&D adventure, Axe of the Dwarvish Lords using the awesome WFRP3E system. It is being played on roll20 VTT and using the Jodri wfrp3e dice bot.
The three, 30-Advance characters are:
□ Dwarf Ironbreaker
■ Dwarf Giantslayer
● Dwarf Assassin

They have retaken part of the Karak in their search for the legendary Axe of the Slayers.

The Beardcutter gobbos were the first opponents. Next they face an uncertain threat hinted to be dawi-zharr.