*MAGIC ITEMS - There is little that the Void's grasp can't influence, these seven Magic Items included.
*ARCHETYPES - Those who have embraced the Void have shaped the power gained there into formidable weapons; both steel and eldritch alike. Explore new archetypes for the Ranger, Rogue, and Warlock.
*MAGICAL SPELLS - The Void is a realm of flowing energies, open to many spell wielders. Ten new spells are sure to give your campaigns a touch of the unknown.
*GM VARIANT RULE: INSANITY - The Void has driven many brave adventurers to the brink of insanity. Now, Game Masters have new rules to utilize.
*MONSTERS - A host of monsters that can be found in the Void. Eight new beasties are ready to assault adventurers that stray too far from safety.
*SHORT ADVENTURE - Birth of The Dark Tree is a short adventure that is intended to be run as a one-shot or can be dropped into a long-running campaign. 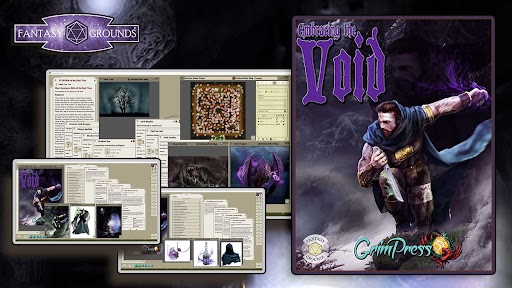