The 4th (well, 5th if you count Issue #0 which included the artificer class and the constructed heritage!) issue of Level Up: Advanced 5th Edition's official magazine, the Gate Pass Gazette, is now available to subscribers. Each issue is packed with official Level Up content -- heritages, archetypes, cultures, exploration challenges, monsters, and so much more!

Not a subscriber yet? Don't worry! Just subscribe now and you'll have immediate access to all five issues so far! 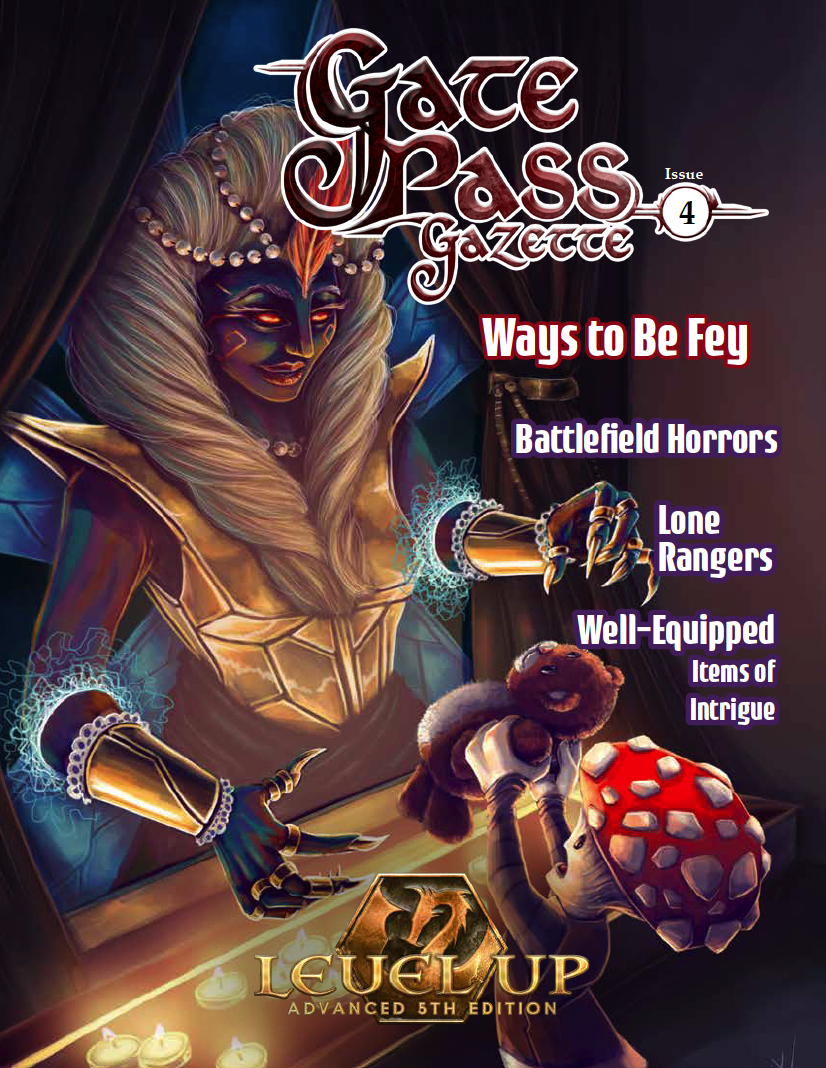 Making their home on fresh battle grounds and forgotten mass graves alike, the creatures collectively known as cadaver gorgers are different stages of the same life cycle. Features the hungering blood maggot, the unsettlingly clever corpse fly, and a walking disease vector in the form of the gorger zombie. By Tim Korklewski.

In every noble court across every plane, behind the pageantry, wealth, and gaiety, there is one thing in common: intrigue. The following magic items and armaments in this article are intended to give any player character or NPC an edge—figuratively and literally—in this dangerous game, all while ensuring that they look elegant and well-attired. After all, if one is going to walk the halls of power, one of course must be properly equipped. By Sarah Breyfogle.

Ways to be Fey​

What happens when make-believe believes it’s real? This article features a new heritage in the form of the fey creatures known as the dreamborn, as well as the Dreaming Wilds and Fey Court cultures and the Fey Servant background. By Ryan Nock.

Lone Rangers: Braving the Wilds Without Spell or Beast​

A request that has been circulating in the Level Up community since the release of the Adventurer’s Guide is for a ranger without spellcasting or a pet. As it turns out, that’s a pretty broad set of parameters, so in this article you can find not one, but three such ranger archetypes! By Peter N Martin.
Click to expand...

I think this is my favorite one so far!

Man, I just can't keep up with this schedule. I am very interested in the ranger options. I may have to pick this up just for those.

Is this only available by subscription? I would love to just pick up an issue or too, but I am not currently interested in a subscription.

They're on DriveThruRPG, Dave, for $10 an issue. I'm not sure when they are put up for sale there, I'd imagine a week or two after release. You get them first from being a Patron, but if you're budget is tight, buying them piecemeal is totally an option.

Staff member
They go up on our site first, and DTRPG a month or two later. Patrons get it first, of course, as they make it possible.

Thank you both! I will look for them on DTRPG


Xaielao said:
They're on DriveThruRPG, Dave, for $10 an issue. I'm not sure when they are put up for sale there, I'd imagine a week or two after release. You get them first from being a Patron, but if you're budget is tight, buying them piecemeal is totally an option.
Click to expand...

Morrus said:
They go up on our site first, and DTRPG a month or two later. Patrons get it first, of course, as they make it possible.
Click to expand...