In TTRPGs we all (for the most part) play heroes! We fight evil and we save the day, but for those who are in long-running campaigns or play in settings like Suzerain (has the Legends Awakened initiative where player sessions can affect canon lore of the universe).

What’s the biggest change or affect you/your party has had in a TTRPG? (be it scripted campaign event or ‘party-gone-wild’ events that the GM has had to deal with! ) 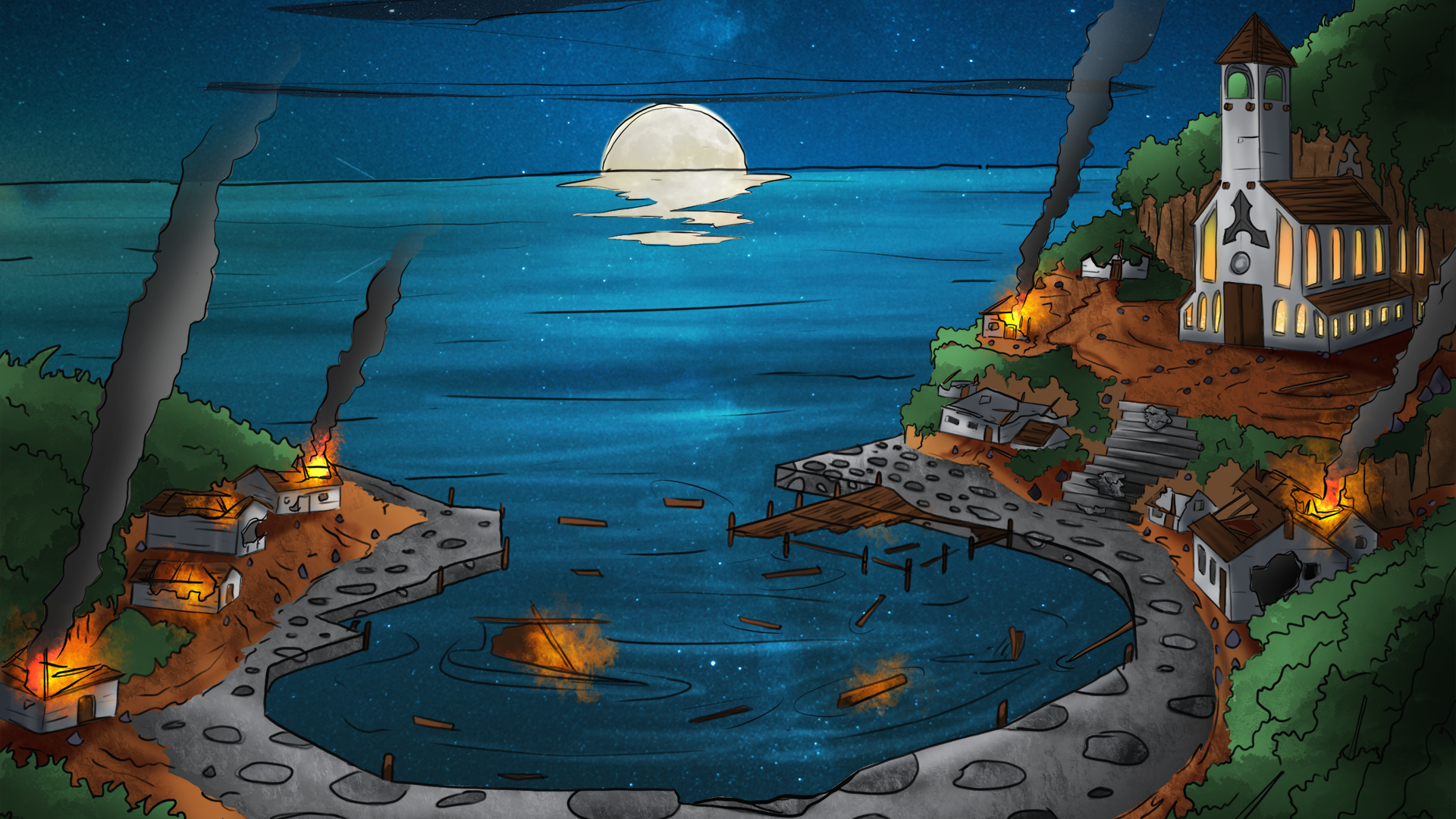 (Picture is of Solrayon-Sur-Mere it was a fishing village - it was destroyed in a Legends Awaken initiative game, more info on that on the Savage Mojo site)

Campaigns I created and ran in my teens often involved nuance-free "These go to eleven" type stakes whereby I put players on a path to save the world... or else.

And yet.. the consequences of a series of cursed die rolls in BBEG fights sometimes resulted in nihilistic denouements that made Beneath the Planet of the Apes' grim conclusion seem like a "Hang in There, Baby!" kitten poster.

"So uh... yeah (slaps a core book shut)... that's it. World no more. Everyone you ever liked or loved is dead. Maybe just... go home and think about what you did."

In a campaign from many years ago, at the end of it we - without realizing it - triggered events that broke the world. Literally. It split into four parallel connected-yet-separate worlds passing through time at different rates.

In a more recent campaign, with the same DM using one of those four worlds as the base setting and with the combined efforts of several parties of old characters and new, we managed to reunify the four worlds - and in the process sink a continent, drown a desert, and cast large swathes of the reunified world 250 years back in time. We're just now starting the probably-endless process of sorting out the mess we made.....

Our adventurers' company motto should be "We'll Break Anything For 100 g.p.".

My players don't play heros, never have. They are motivated by four basic principles: spite, greed, petty-mindedness, and irrational affections for inconsequential NPCs.


That makes them the standard set of wandering murder hobos, for sure. I love how groups like that often do good accidentally, an unexpected by-product of their greed and petty-mindedness

I once had a group who were so annoyed by a guy's mustache that they pushed him out of a window. They didn't know he was the arch-villain's spymaster hidden in the King's court. As a direct result the enemy invasion failed, the kingdom was saved, and when the PCs were forced to admit what they did, they were both hailed as heroes and for their supernatural ability to sense evil, no matter how well it was hidden.

AllRoundGoodEgg said:
That makes them the standard set of wandering murder hobos, for sure. I love how groups like that often do good accidentally, an unexpected by-product of their greed and petty-mindedness
Click to expand...


Not my guys. They don't like to complicate their investments by random violence, and they hate getting involved in other peoples' causes unless they are getting paid very well.

They spend a lot of time seeking tax-free income, and managing their portfolios.

A bit of background: I inherited a D&D 1E game when the DM had to leave. It was already really high level when I took over (levels 19-25), so there was a bit of Monty Haul syndrome already. After about 4 years, I had enough of dealing with these super-powers, so I offered the players a choice: we end the campaign, retiring the characters, I throw an army of level draining undead in an effort to bring them back to normal (assuming I didn't kill them in the process), or I run a final epic where the characters will either gain immortality or be completely wiped from existence. Unsurprisingly, they chose the latter option.

The players, who each had their own strongholds, followers, etc, suddenly noticed that many of their allies simply vanished, and no one else ever remembered them. Divination magic revealed that someone had begun to unravel the past, as they'd stolen the power of the god of Time. The old god of Time helped them travel to the Demi-plane of Time, where they could observe all points of time at once. They found their foe, who as impacting specific events to change the present in his favor. Unfortunately when they went to stop him, he discovered the Demi-plane of Time, where he went in an effort to erase the universe, and restart it completely under his control. This led to a final battle where the party had to keep the new god of Time distracted while time unfolded as it had originally. They were able to keep most of history intact, but a few aspects changed (so I could introduce rule changes from 2E). In addition, they were written out of history, but as a reward, the god of Time (now fully restored) petitioned for their divine ascension.

In my Infinite Cabal campaign, which was about world-hopping hermetic magicians trying to understand the origins of the GURPS Infinite Worlds setting, the characters ended up dethroning the demiurge who runs the place and installing a new one. This is roughly comparable to changing the root password on reality.

John Dallman said:
In my Infinite Cabal campaign, which was about world-hopping hermetic magicians trying to understand the origins of the GURPS Infinite Worlds setting, the characters ended up dethroning the demiurge who runs the place and installing a new one. This is roughly comparable to changing the root password on reality.
Click to expand...


Sounds similar to how Suzerain works with the different realms and such. But that definitely sounds like a major change in the world :')

Experiences Streaming TTRPG's - the Good, the Bad, and the Weird

TTRPGs - With or Without Reality?