Mimir, an app for assisting GMs, solo players, and players without a GM

Apologies for the shameless self-promotion. But I think this is a tool some of you will be able to put to good use.
It's been a while since I've been around these parts, but over the last year I've been working on a thing that some of you may be interested in. It started as a fancy “oracle” for solo games but evolved into a bit more than that.

If you’re like me, the crunchy rules bits come easy. And if I need help, there are a few hundred great resources available for pretty much any game I want to play. What I need is an inspiration generator that isn’t tied to a specific game system. And more specifically, I need something that can give me inspiration, on the spot, based on context.

I spent some time looking around and couldn’t really find what I was looking for. So I decided to make it. 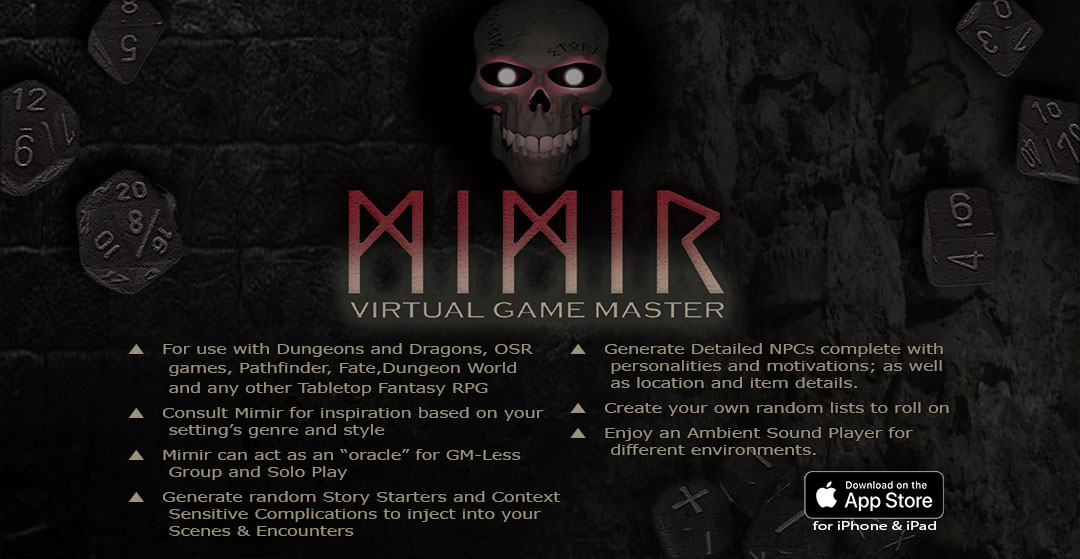 The short version is that Mimir is meant to help you play a game without a GM (in a group or solo). Or if you are the GM, Mimir becomes your table-side assistant.

The longer version is that, early in development, Mimir’s original function was to serve as an “oracle”. If you are familiar with a lot of solo systems, that's probably a familiar term. If not, well, it's pretty simple. You ask questions and it gives you answers in the form of “Yes”, “YES!”, “Yes and…”, "Yes but...", “No”, “NO!” and “No but”. And based on that, your creativity, what you already know about the story so far, and the game system you are using, you decide how to interpret that answer.
It's fun, but can be tricky. So to help out a little more, Mimir also provides a bunch of other information to help you interpret what those answers can mean for your character or characters.

You start by making a few selections to define your campaign's setting. Then, based on your selections, Mimir provides an Introduction scene. And as you play, it occasionally serves up “Complications” that are meant to throw you or your players a curveball. The Complications are context-sensitive and are flavored based on your setting.

The other big feature (and maybe my favorite) is the random NPC generator. Now... I know. You can throw a rock and hit a random NPC generator. So I wanted to do something a little more useful than what I’ve seen in similar apps. Again, Mimir doesn’t care what game system you use. So it’s not a stat block generator. Instead, I wanted it to generate a character. Meaning, you get a name, race, appearance, physical quirks, their level of personal wealth, their profession, where they live, what their personal style is, how educated they are, their personal struggles, ambitions, personality traits, what their motivations are, and a suggestion for how they became tied into your story or how they generally prefer to solve their problems.
And there is some intelligence behind all this. A sheepherder isn’t likely to be extremely rich, well educated, and live in an expansive keep. Sure, it can happen, but it isn’t likely. And something like that might be an interesting story in itself.

Oh yeah, and you can save and edit NPCs you really like.

Mimir also presents a screen full of details related to places and items. So if the oracle answers "Can?", Is?", "Does?" and "Do?" questions, and the NPC generator answers “Who?” and "Why?", the details screen answers “When?”, “Where?” and “What?”. It generates a location and some features for it, as well as random items. And it tells you what happened to the item, the place, a person nearby, etc. This screen is super-useful for GM-less play, offering up a ton of details that can offer some really useful guidance.

You can also use it to make your own custom random lists. Realistically, no app is ever going to know the specific details of your setting. So this is where you can add that info. You can make up whatever kind of list you want and tag each entry as “common”, “uncommon” or “rare”. Then when you roll to get a random result from your table, the rarity determines how likely an entry is to pop up. This is great for things like custom random monster lists, treasure lists, random enemy organizations, random weather events, etc.

Oh yeah, Mimir also includes an ambient environmental sound player. So if your scene is taking place in a forest, it can play the ambient sound of the forest. Or a desert, or cave, or walking down the street in a city, or a crowded tavern, etc. There's no music. It's just wind blowing, water dripping, birds chirping, people talking in the background, etc. I find this sort of stuff is great for increasing immersion in a way that’s impactful, but not distracting.

So yeah, if you have an iPhone or iPad, maybe check it out. I'd love to hear your feedback! And if you don't want to buy it just to give it a look, don't. Here are some promo codes!

All I ask in return is that if you use a code please come back here and let me know what you think about it.

OGL games to check out before they possibly disappear