Compatible with Fantasy Grounds Unity
New Paths Compendium - Expanded Edition
Choose Your Path!
Shadows are falling across the land: monstrous things stir in the depths, schemers spin their plots in the towers of the powerful, and unholy threats rise from the grave to menace the living. It's an age of terrors and wonders...and heroes!

This expanded edition of the New Paths Compendium gives you all-new options to create your new favorite character. You'll find 12 new and expanded Pathfinder RPG classes from level 1 through 20--plus feats, spells, archetypes, and resources to build and play a character to challenge anything the GM throws at it!

*All-new Warlock, Tinkerer, Priest, and Trickster base classes, with favored class options for all classes
*Totally revamped Savant and Archer classes
*Death feats, available to heroes who have been raised from the dead
*New battle feats and new spells
*And much more!
There's a big world of adventure and peril out there - make a hero that it won't soon forget! 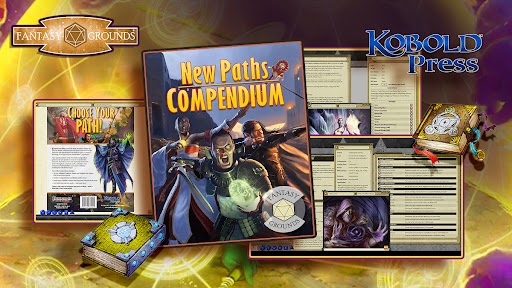