What podcasts do you listen to (and why?)

Revolutions. A history professor does some deep dives into a bunch of revolutions. French, American, 1848. The finale is the Russian Revolution. I haven't finished this one yet.

History of Rome. By the same professor as Revolutions. An earlier effort of his and not as professional. But very detailed.

3 Black Halflings. Only just started this one a couple of weeks ago. A good mix of gaming and gamer culture with a focus on race issues.

History of the Persian Empire. Exactly what it says on the tin.

Occasionally drop in to listen to a bit of Critical Role but I've grown less and less enamoured of it over time.

Just started getting back into podcasts now that I'm driving again.

My top modern ones are My Favorite Murder and Levar Burton Reads.

I also listen to a lot of Old Time Radio. Suspense, Midwebs, Dragnet, X Minus One, Yours Truly Johnny Dollar, etc.

Gates McFadden InvestiGates
The actress who played Star Trek: The Next Generation's Dr. Beverly Crusher talks to her "space friends" - so far: Jonathan Frakes, Levar Burton, Brent Spider, Nana Visitor, John deLancie, and Marina Sirtis. The geek in me wants them to talk more about TNG, but really it's her coming up with great questions so they can get more into their childhoods, their passions, their earlier careers, etc. I like her playful energy and the intimacy these people have with each other. She also has a great, kind of soothing speaking voice. Episodes are about an hour long.

Unspooled
Actor & comedian Paul Scheer and film critic Amy Nicholson watch movies from the American Film Institute's best of lists, and then get into hem on the show. They include a nice bit about what the world was like the year the movie was released, and really get into each movie's place in the culture, how it got made, and some actual art criticism, not just opinion wankery. I really like the casual, intelligent, energetic feel of the show, and it always makes me want to go watch the movie they just talked about. Episodes are usually an hour to an hour and 45 minutes, so it's a pretty in-depth show - which I love.

NPR's Throughline
This is kind of what I want all news programming to be like: looking at the history behind something that's in the news. Episodes are in the 45-75 minute range.

Old Hollywood Realness
Kathleen Noll and Philip Estrada gab, gush and recap all the classics. It's pretty high energy, and both hosts are really into costumes, so you have been warned. Episodes are a little over an hour.

Song Exploder
Each episode, a musicians takes apart one of their songs and talks about how and why it was made. Hrishikesh Hirway hosts.

Rebel Force Radio
A long-running Star Wars fan podcast, hosted by two Chicago natives. I don't listen to every episode, because they cover all the new SW stuff and I tend to not watch the animated SW shows. They've had SW animated series voice actors on as guests, they do film and episode commentaries, they talk some about collectibles, they do episodes all about production design, and just generally have a lot of fun.

David Tennant Does a Podcast With
Pretty much what's on the tin, here. David interviews other actors, including a lot of people he's worked with. I love the sound of David Tennant just talking, but his guests include Billie Piper, Neil Gaiman, Elizabeth Moss, Olivia Colman, Dan Levy, George Takei, Jodie Whittaker, Katherine Tate, and Ian McKellan.

Inside of You with Michael Rosenbaum
Michael interviews actors and the like, and tends to focus on personal struggles, hard times, recovery, etc. and really gets his guests to open up. He talks a little too much about himself, but the insights he gets from his guests are worth it. He's had a lot of his Smallville co-stars on, but also Keifer Sutherland, Charisma Carpenter, Robert Englund, Seth Green, Sean Astin, Jason Isaacs, Zach Levi, and lots more.

The Ron Burgundy Podcast
Will Ferrell as the Anchorman himself, wherein he talks about himself, misunderstands things, gives his assistant a hard time, and interviews all sorts of folks.

Morrus Unofficial Tabletop RPG Talk
They do a very good ttrpg news roundup, talk about Kickstarters, discuss trends in the biz, and interview creators and movers-and-shakers from various parts of the ttrpg milieu.

Cinematic Universe
Two Brits talk about comic book movie and tv adaptations. They cover relevant news and trailers, and discuss individual works in depth, usually with guest from the critic-sphere. I like the hosts honest takes on things.

Lovett or Leave It
Jon Lovett of Crooked Media tells bad jokes about current affairs, often does a humor quiz show segment with listeners, and interviews someone with informed takes on the news. The bad jokes section is great because he has a comedian guest who critiques the jokes, and sometimes they get into how and why jokes and comedy in general works, which I find fascinating.

Wait, What?
Jeff Lester and Graeme McMillan discuss pop culture, but mostly comics. Graeme has worked as a professional critic for various major news outlets including Slate and The Hollywood Reporter. In their sub-series Baxter Building they read and discussed every issue of volume one of the Fantastic Four, and listening to them discuss the strengths and awkwardness of the original Lee & Kirby stuff and then lose their minds as the series gets worse and worse is great.

Everything I needed to know, I learned from Ken and Robin 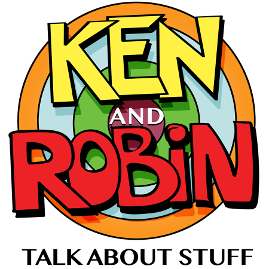 Ken and Robin Talk About Stuff

I Know Dino... perfect for dinosaur enthusiasts. Goes into detail on the latest finds, recently published papers, dino news, occasional guests and Dinosaur of the Day.

Just Interesting... 3 guys chatting about a variety of topics and a quiz

Levar Burton Reads... just started getting into this one and we really like it

The Prancing Pony Podcast
- I knew there was a lot of background to LotR and the Hobbit but I had no idea Tolkien's world was this complex! The LotR appendices barely scratch the surface!

I listen to a few and are easily broken into categories.

Science/Skepticism:
The Skeptics Guide to the Universe - Science and skepticism at it's best. My favorite podcast
Inquiring Minds - The podcast has gone through a few cohosts since it launched but Indre Viskontas is great
The Strangest Thing I Learned This Week
Science Vs
Science Friday
Talk Nerdy

News:
Meet the Press (plus a smattering of other Sunday news shows all over the political spectrum)
The Daily
Post Reports

Fictional/Entertainment podcasts (there are lot I have listened to over time, this is just a small sample)
Welcome to Nightvale - This is one of my favorites, I can't recommend it enough
The Thrilling Adventure Hour - A podcast in the style of old time radio. Serialized stories with greats like Beyond Belief (two married, drunken high society mediums) and Sparks Nevada, Marshal on Mars. This one is no longer in production but is phenomenal
Out of Sight - A horror story currently between seasons
Dust - A sci-fi podcast. A different story each season
The NoSleep Podcast - Another horror podcast
S-Town - An investigative podcast into a murder that didn't happen

KINGCAST - A podcast that talks about both the film version and book version of King's works.

WORD BALLOON COMICS PODCAST - a podcast that talks with Comics Creators and other luminaries of the industry.
Last edited: Jul 15, 2021

Just had a thought, do video channels count? I'm gonna say they count.


Come to think of it, I watch the Completely Unnecessary Podcast (done by Pat the NES Punk) and Lehto's Law on youtube, but never listen to them in their podcast form. There's really no need for the visual components.

Behind The Bastards: An irreverent look at the worst people in history. Not just the obligatory Hitlers, Stalins, and Husseins. Also lesser known bastards like King Leopold, as well as folk who have led to some rather nasty fixtures in modern society (like Phyllis Schafly, Savitri Devi, and Gabriele D'Annunzio)

Dipped In Tone: A guitar podcast

Feminist Frequency: A feminist critique of pop culture and mainstream film and TV

Philosophize This: Overview of various schools of thought in philosophy

Noble Blood: A Mahnke-produced series on some of the most notorious murders in royal history

History of Rome/History of Byzantium: Self-explanatory. Both in-depth with hundreds of episodes.

BBC In Our Time: Documentary podcast series with a roundtable discussion on a variety of topics ranging from history, science, mathematics, and the arts. I also use this to fall asleep (I'm not kidding).

These are just the ongoing podcasts. Pod miniseries I would recommend are "Sleepwalkers", about developments in AI; "Bagman", Rachel Maddow's series on Spiro Agnew; "It Could Happen Here", a speculative look at the possibility of civil war in America (a real upper);

Grendel_Khan said:
I listen to way too many podcasts, and most are comedy ones. For TTRPG podcasts, though:
Click to expand...

No this thread is the opposite. NOT ttrpg podcasts.

Morrus said:
No this thread is the opposite. NOT ttrpg podcasts.
Click to expand...

Great Lives (BBC production. A celebrity chooses a favourite historical figure. The show gives a swift biography)
Western Way of War (military & political professionals talk about modern warfare)
Overly Sarcastic Podcast (the YouTube channel has fun with podcasting)
Decoder Ring Theatre (which isn't really a podcast. "Radio Drama" might be a better term)
Mark & Carrie (economics commentary. But don't worry! They're both academics, but Mark was a comedian)
No such thing as a Fish (A podcast by the researchers behind the questions on QI)
In Our Time (This is another BBC production. It provides some good overviews of complex topics)

But some of the videos I listen too are basically podcasts anyway. They don't rely on any graphics to make their point across?

The Weekly Planet is the only podcast that I listen to weekly.

For those times when I have a long drive or need a break from other media I go with Planet Money, Invisibilia, Science Vs, and Radiolab.

I lack a convenient commute to listen to longform media of any sort, so no podcasts for me. I truly wish there were transcripts; many sound interesting and I can read stuff WAY faster than people can read it to me.

The few I have listened to have been Ahmed "D20 Arabia" Aljabry's Zakhara retold, plus a handful that interviewed me personally. And I listened to them because they were either relevant to my products or included an interview with me personally.

Podcast #192: Rule of Cool vs Rules as Written with Jessica Hancock

Podcast #170: Secrets of the Vibrant Isle with Craig Campbell