The ZEITGEIST setting is a step away from traditional fantasy. In many parts of the world, day to day living is much unchanged from how folks lived centuries ago. Fey trickery, prowling monsters, and roaming brigands pose as great a threat as ever. Priests and druids offer guidance, and it’s possible to live one’s entire life without seeing a cogwheel.

But ironclad industry is reshaping cities, and railroads slice through the wilderness. Steam and soot darken the skies, urban labyrinths seem to have spirits of their own, and new frightful creatures crawl in the shadows, fiends that the old religions have no defense against.

Heroes and scoundrels stroll cobbled streets in top hats and tails, wield pistols or enchanted arcane fusils, and battle over matters of philosophy and economics as often as over treasure and thrones. Groups once lumped together as ‘savage races’ have founded nations of their own, eager for prosperity and respectability. And while many resist efforts to scientifically categorize magic, academic institutes of sorcerous studies are attracting extravagant investments from nations who fear what inventions – technological or thaumaturgical – their rivals might bring to bear.

A campaign setting for use with the 5th Edition of the world's most popular tabletop roleplaying game.

Steam and soot darken the skies above the city of Flint, and winds sweeping across its majestic harbor blow the choking products of industrial forges into the fey rainforests that dot its knife-toothed mountains. Since the earliest ages when the people of Risur founded this city, they feared the capricious beings that hid in those fog-shrouded peaks, but now as the march of progress and the demands of national defense turn Flint into a garden for artifice and technology, the old faiths and rituals that kept the lurkers of the woods at bay are being abandoned.

The Unseen Court, the Great Hunt, and the many spirits of the land long ago conquered by Risur’s kings no longer receive tribute, but they cannot enter these new cities of steam and steel to demand their tithe. The impoverished workers who huddle in factory slums fear monsters of a different breed, shadowy children of this new urban labyrinth. Even their modern religions have no defenses against these fiends.

Times are turning. The skyseers – Risurs folk prophets since their homeland’s birth – witness omens in the starry wheels of heaven, and they warn that a new age is nigh. But what they cannot foresee, hidden beyond the steam and soot of the night sky, is the face of this coming era, the spirit of the age. The zeitgeist.

In 2011, we launched the ZEITGEIST adventure path. At the time it was for Pathfinder and D&D 4th Edition. That adventure path was critically acclaimed with its mix of intriguing plot, memorable NPCs, and a strong, immersive storyline. It was unapologetically targeted at the advanced GM.

In the ZEITGEIST campaign saga, your characters serve in the Homeland Constabulary of the nation of Risur, protecting the country and its citizens from foreign threats lurking within Risur’s borders. During missions of espionage and assassination, your duty will be to root out hostile spies and pursue international conspiracies. As you learn more of your homeland’s own secrets, however, your loyalties may be tested, may even be turned, and you may find that it is you whose hand controls the gears of the turning age.

Here's what they said about it:

Now that world, with its mix of rennaissance technology and fey magic, is coming to 5th Edition as a fully-fleged campaign setting in a beautiful hardcover book.

The continent of Llanjr is our setting. 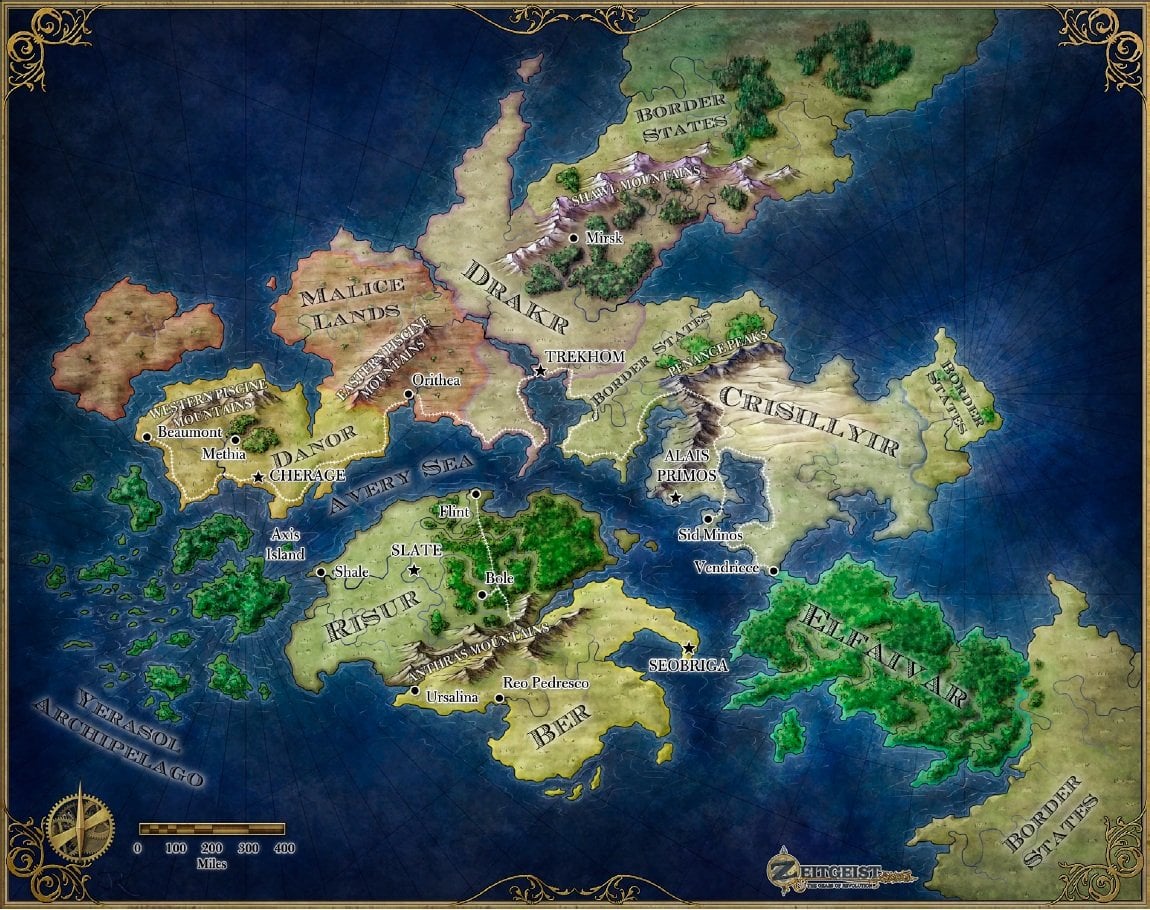 Most of the action of the original adventure path occurs in Risur, a subtropical nation with ancient ties to the magic of its land, struggling to adapt to a recent revolution of technology and industry. While the nation's historic capital lies in Slate with its antique castle manors and elite gated villas, the fulcrum of its power is slowly shifting to Flint, an industrial powerhouse benefiting greatly from the nation's need these past few decades for more and more advanced weapons and warships.

It was Risur's traditional enemy Danor - bereft of magic after a cataclysm five centuries past - which began the industrial revolution. Their steam-powered ships and deadly cannon fusillades won them many battles, but the artificers of Flint are combining magic and industry in ways impossible for their enemies, and the tiefling oligarchy of Danor seems content with the land it has acquired.

Many of the other great nations, however, fear what Risur can achieve with the marriage of magic and technology, and King Aodhan of Risur worries they might try to disrupt his nation's safety and prosperity.

Elsewhere, the dwarven homeland Drakr preaches of a nihilist doomsday and sells technomantic arms and war machines to warlords and mercenaries across the land. The clergy of theocratic Crisillyir loathe Danor and its tiefling leaders, and they wield piety as a lash to inflame distrust of what they claim is a godless abomination. Just across a mountain border to Risur's south, the warlike clans of Ber have formed an alliance, which might signal a coming invasion. Even in distant Elfaivar, where the small Risuri colony named Kellandia struggles against settlers from other nations to claim the broken empire's bounty, the natives lash out at these interlopers, unable to forgive a centuries-old grievance still fresh in their long-lived hearts.