This one is for the homebrewers out there who are good at mixing and matching maneuvers. I'm going through my old Dragon Magazines when I came across an article in issue #309: "New Martial Arts Styles," written by Brian Mintner Each style consisted of a bunch of prerequisites--mostly stat minimums and feats, since this was for 3.0--but granted a bonus to something if they were all met. One of the styles detailed in the article is the Broken Fist, "an upstart style perfected by halfling monks" that "relies on speed and agility to strike first and strike hard." 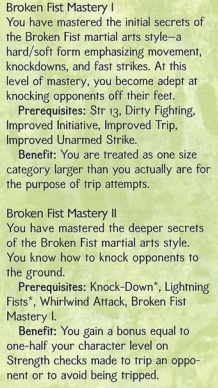 Obviously, replicating such a style was impossible in 5e... until now!

So I was thinking that some people may enjoy coming up with feats that are similar to this, using maneuvers (and possibly also levels in a particular class) as a base. The feat could give a bonus such as enhanced Strength (a +1, most likely), making your enemies always have disad on saves against you knocking them prone, extra basic damage when you use Shove, etc., but also require that you have a certain minimum attribute, maybe a certain number of levels in a particular class, and, say, three maneuvers from the following list: Perplexing Fury (1st degree Mist & Shade), Dangerous Strikes (1st degree Razor's Edge), Twist the Blade (2nd degree Razor's Edge), Whirlwind Strike (3rd degree Rapid Current), Gut Strike (3rd degree Tooth and Claw), or whatever other maneuvers think would best replicate the feats listed above (I grabbed these because they looked "strike hard and fast").

Staff member
I kinda feel that niche might be combat maneuvers.

I think trying to create Ninja's & Superspies type deal in 5e would be a great idea. Palladium Fantasy had some good ideas, particularly for Archers and Monks that I would be inclined to incorporate.

You could have different types of HtH combat, whether Martial Arts, Assassin, Military, and then have basic, expert and mastery offering bonuses, such that they are a feat (or edge in Swade).

If anything, all martial classess should be able to pick from a list of powers akin to Gurps Martial Arts. This would put them a cut above the rest, and then split these into categories - Bow / Thrown, Atemi, and General.

Yeah, I think so too. Maybe feats that give you a collection of 3 maneuvers known, and maybe increases the DC and attack rolls made with them by 1. Something that makes you better at those maneuvers.