On the Trail of Legends!
The tale of the lost Conroi Expedition has tantalized treasure-hunters for a century, and a startling discovery provides new clues to their fate. When the archivist who discovered them is murdered, the heroes must unravel a trail of secrecy, deceit, and betrayal to discover the tantalizing truth that connected the members of the expedition. Far more than the promise of gold draws the heroes onwards, as hidden agendas reveal a darker conspiracy and cover-up going back decades that may rule the destiny of many nations. On the hunt to claim the legendary treasure with enemies on every side, one false step and the heroes will also meet the lost expedition's deadly fate!

Legend of the Burning Star is a Pathfinder Second Edition adventure for 10th-level characters set in the Kingdom of Foere, the Grand Duchy of Reme, the Grey Citadel, and beyond in the Lost Lands Campaign Setting. This rich and exciting world 20 years in the making has been home to dozens of adventures from Necromancer Games and Frog God Games and was produced with their cooperation to be compatible with The World of the Lost Lands campaign guide! It is the fourth of six adventures in the Aegis of Empires Adventure Path, with each adventure exploring hitherto unexplored areas of the Lost Lands with a combination of horror, intrigue, deadly danger, and the lure of ancient mysteries.

While designed for use with the Lost Lands, these adventures are loosely connected rather than following a strictly controlled plotline, enabling you to easily place them into any campaign world. Your heroes can explore at their own pace to discover the secrets of antiquity or be consumed in their seeking as they brave the dark paths of the Aegis of Empires. Grab this fantastic 98-page Pathfinder adventure today and Make Your Game Legendary! 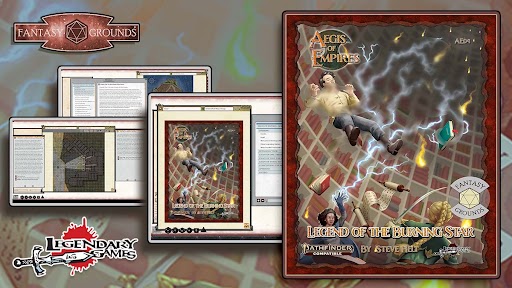