The Copeline-class Merchant Vessel is now available in PDF at Drive-thru RPG and at our Independence Games webstore!

The Copeline-class merchant vessel is quickly becoming the most popular ship in Earth Sector! Created in 2348 by Corolys Shipbuilding Company, the ship has overtaken such venerable designs as the Rucker and Atlas among merchants in Earth Sector.

The Copeline is a 300-tonne ship with modules which can be switched out to make the ship into a freighter, a passenger liner, a scout, or a combination of all of those! This versatility has made it the chosen ship for independent operators and small shipping corporations.

Come and see why the Copeline has become so popular! 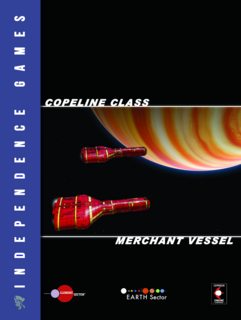