Sure, they’re attractive, but it’s that glimmer in their eyes that drew you in. That quick flash of smile and laughter.

You dive in with a heady rush, but will you swim or drown?​
The Date is a solo romance RPG on a single page. It is the second game created using the Second Guess System first used in the One White Eye RPG. Here, the system of impending dread and self deception is instead turned to the uncertainty and trepidation of a first date with your new crush. All you need are a d20, a d6, and something to record your journal entries on. 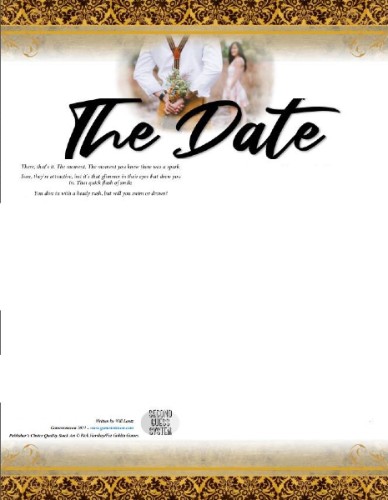 Many of you may remember the one page solo RPG that I launched back in October, One White Eye. The game was a bit of a reworking of The Wretched in an attempt to streamline the system down to a size that could fit on a single page. One of the key aspects of that was a mechanic where any time you had to revisit a prompt, you had to reveal something about the previous entry that was a lie either to yourself or others.

One White Eye received some good comments from folks and it set me to thinking... what else could be tackled with the same system but a new setting? This lead to a few things, not the least of which is a name for the system itself, The Second Guess System, referencing the uncertainty generated by repeated visitations to your responses.

As I set about tinkering with additional settings and prompts, I realized I wanted to try to expand the types of things that you might guess could be done with this at first glance. I'm sure some of that is also inspired by Wretched & Alone as the Wretched Jam brought to bear a wide range of games at really showed some interesting ways to bend that ruleset outside of the initial scope. One White Eye then, plays to a particularly grim endpoint as there is truly no way to win or survive that game, only an inevitable slide to despair.

But what if the new game altered that condition? What if the outcome was more uncertain as well? In order to reach that point, though, I thought it best to swing wildly to the opposite end of the spectrum with something much more lighter and hopeful in theme, romance. Now, I'm sure prepping another romance game, Warmer in the Winter, for Zinequest 3 had a hand in leading me to this point as well, but inspiration comes from all places!

Regardless, you'll now see that The Date explores the trials and trepidations of a first date, whether that's a blind setup, your coffeeshop crush, a Tinder hookup, or something else entirely is up to you. Each new twist will help you pull back the layers of a person and see if your date is successful.