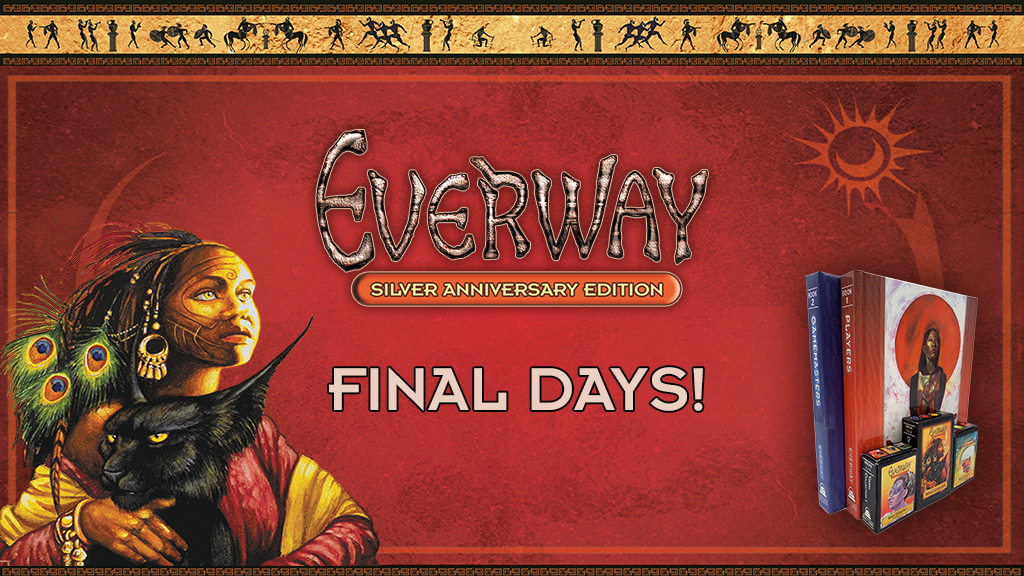 Everway Silver Anniversary Edition is a new, expanded edition of the 1995 landmark narrative roleplaying game by Jonathan Tweet. This highly-visual, diceless system includes a large collection of fantasy art cards to inspire wildly imaginative heroes that are as unique as you are. These images can also inspire fantastic new worlds for your world-walking heroes to explore. The game uses a unique, tarot-like Fortune Deck, along with Karma and Drama) to moderate gameplay, allowing for a much larger possibility space of outcomes than dice alone would provide.

Everway Silver Anniversary Edition is down to its final few days on Kickstarter. Come learn more about this visually stunning game on the Kickstarter page at http://bit.ly/EverwayKS.

For a whole generation of indie tabletop designers EVERWAY was foundational — innovative, revelatory, ambitious and wonderfully strange. It was all the things we aspired to be, and EVERWAY got there first, and better. I’m really excited to see it return to life.
—Jason Morningstar, creator of FIASCO

Jonathan Tweet is one of the most innovative designers in the business, and EVERWAY is his masterpiece. It’s a tragedy that EVERWAY, one of the industry’s trailblazing indie designs, has been out of print for twenty years. That it’s coming back now should set the entire roleplaying world ablaze.
—Shannon Appelcline, author of Designers & Dragons

EVERWAY is one of the most inspired and innovative storytelling games I’ve ever seen. It has been a key influence on how I run, play, and design games for twenty-five years. I’m thrilled to see it return for a new generation to discover.
—John Scott Tynes, designer of PUPPETLAND, UNKNOWN ARMIES, and DELTA GREEN

Wow. Just wow... This is a fantastic revision! Emphasis upon the "vision." I was wondering which game to use to introduce our niece to roleplaying and now I know! I’m thrilled about the new tarot-sized Fortune deck, the expansion of the deck with the insightful Seasons cards, and the revised rulebooks that play off the game’s visual strengths. EVERWAY is a great game and it has been remixed by people who love and understand it.
—Rob Heinsoo, co-creator of 13TH AGE and 13TH AGE GLORANTHA, lead designer DUNGEONS & DRAGONS, 4th Edition

EVERWAY’s powerful but subtle mechanics and total commitment to trust as game motivator mark off a significant and influential step away from roleplaying’s wargaming origins. Tweet integrates trust and dialogue into every facet of his innovative design, which was revolutionary 25 years ago and remains inspirational (and aspirational) today.
—Kenneth Hite, designer of NIGHT’S BLACK AGENTS and lead designer of VAMPIRE: THE MASQUERADE 5th Edition

EVERWAY was an act of love: one of the first fully-committed statements that role-playing can have a different purpose, can be played by different people, and can work in a different way.
—Ron Edwards, Adept Play, designer of SORCERER, co-founder of the Forge independent forum

It is not that EVERWAY was a game that could be fruitfully hacked (though it was), rather that EVERWAY was a key to opening the door to how and, more critically, WHY you could hack anything. The tools and lessons of EVERWAY made for a great game, but it is in the spaces beyond EVERWAY that they became truly transformational. I am absolutely looking forward to the new edition for what is in it. New fortune cards, gorgeous layout, clever product design — these things are going to be amazing. But more than anything, I'm excited to see EVERWAY in a world that is (I hope) ready for what it brings to the table.
—Rob Donoghue, co-designer of FATE

Remember the guy who took D&D and turned it into the coherent and streamlined system that dominates the RPG market? EVERWAY is the game he made when he was given full creative control. Its original edition was like a time-travel message from the future, and now we’ve finally caught up to it.
—Greg Stolze, creator of REIGN and TERMINATION SHOCK

My first day at Wizards of the Coast, Jonathan Tweet said, "Mike, I want to show you an RPG I've been working on." My response was, "Neat." Which is what I say when something blows me off my chair. Get ready for that to happen to you. Ladies and gentlemen: EVERWAY is back.
—Mike Selinker, developer, BETRAYAL AT HOUSE ON THE HILL, APOCRYPHA, and the PATHFINDER ADVENTURE CARD GAME

In a pivotal era for TRPG development, EVERWAY taught gamers to look beyond tables and dice and to explore a thousand worlds through art and inspiration. It is as much a touchstone of my game design style now as it was when it first hit shelves in 1995.
—J Gray, R. Talsorian Games as Lead Designer for CASTLE FALKENSTEIN

When I look at Everway I am amazed that it was originally published in 1995; and I was at the company that published it! At the time I thought it was smart - but strange. Now it looks smart - and completely sensible; it was so far ahead of its time that I pretty much completely misunderstood it. I am excited to see this game again - it is deserving and I am looking forward to playing it again.
—Richard Garfield, creator of MAGIC: THE GATHERING, KEYFORGE, and HALF TRUTH

Kickstarter Space 1889: After Kickstarter is Live! For the New Empyrean Engine and 5e!