The 31st of October is fast approaching. All Hallow's Eve. A time of spooks, witches, ghouls, and devilish antics. And, after steam-rolling through its funding goal and several stretch goals, our Level Up Kickstarter is fully embracing the seasonal fear. Let's take a look at the terrifying treats on offer!

If you're still wondering what Level Up is all about, we've covered the very basics in previous blogs. The Level Up team have worked extremely hard to produce a ruleset that is both backwards compatible and standalone. Plus rigorous playtesting has ensured the mechanics are implemented well. You can find all of the documentation and info over on the Level Up website. The Level Up kickstarter has been reeling in stretch goals, however. And as new ones are added, they seem to be feeling the influence of the underworld. 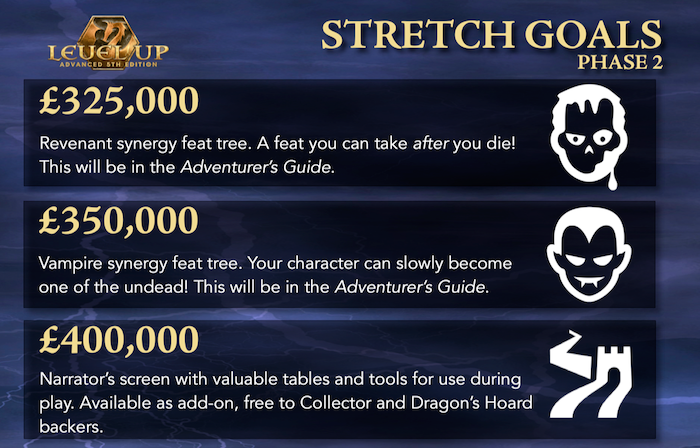 With the first new synergy feat tree on offer, your character will be able to pick themselves up from the floor and continue their mission even beyond death. No need to reroll or shred a favoured character. So you might have a few grisly, unhealable wounds and constantly smell like rotting flesh, but those side effects are nothing between adventuring friends, right?

Then there's the second synergy feat tree, which enables your character to slowly morph into one of the world's most iconic undead. Yes, you'll gain an aversion to sunlight and a thirst for blood, but that's nothing compared to immunity from aging and the strength of the grave, surely?

If you haven't already done so, head on over to the Level Up kickstarter and checkout the page, then get involved and help us to continue to shape and grow the game!