EN Publishing's epic Fifth Edition campaign of steam and soot comes to Roll20 with Island at the Axis of the World and the Campaign and Player's Guides. 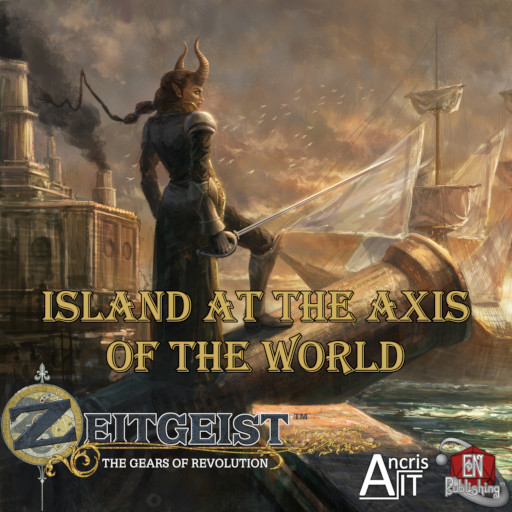 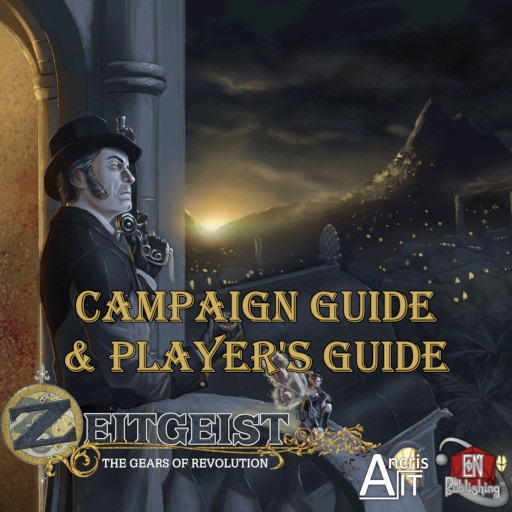 Steam and soot darken the skies above the city of Flint, and winds sweeping across its majestic harbor blow the choking products of industrial forges into the fey rainforests that dot its knife-toothed mountains. Since the earliest ages when the people of Risur founded this city, they feared the capricious beings that hid in those fog-shrouded peaks, but now, as the march of progress and the demands of national defense turn Flint into a garden for artifice and technology, the old faiths and rituals that kept the lurkers of the woods at bay are being abandoned.

The Unseen Court, the Great Hunt, and the many spirits of the land long ago conquered by Risur's kings no longer receive tribute, but they cannot enter these new cities of steam and steel to demand their tithe. The impoverished workers who huddle in factory slums fear monsters of a different breed, shadowy children of this new urban labyrinth. Even their modern religions have no defenses against these fiends.

Times are turning. The skyseers—Risur's folk prophets since their homeland's birth—witness omens in the starry wheels of heaven, and they warn that a new age is nigh. But what they cannot foresee, hidden beyond the steam and soot of the night sky, is the face of this coming era, the spirit of the next age. The zeitgeist.

But if you frequent these forums, you likely have read that intro countless times and might even know it by heart. You might have copies of one of the greatest adventure paths in PDFs for Pathfinder, 4e, and 5e. So what does ZEITGEIST on Roll20 bring to the virtual tabletop?

Encounters ready to go. Every encounter is set up with color tokens linked to 5e character sheets with clickable actions to automatically roll dice to the chat window.

Tools for when the players go off the beaten path. The campaign and player's guides come with maps of Lanjyr, Flint, and the RHC headquarters as well as 40 spare NPCs that you can drop into the game for those times when you need to quickly improvise.

Read the adventures and guides like a book. In case you don't have every version of ZEITGEIST known to humanity (or even zero versions) each handout comes with paging links so you can read the contents like a book from beginning to end through the external journal.

Saved prep time. All these details mean that nearly 100 hours have gone into preparing Island at the Axis of the World, the Player's Guide, and the Campaign Guide. The attention to detail means that you can focus your preparation time on making the story a memorable one for you and your players.

Torquar said:
Can we expect part 3 today?
Click to expand...

Thanks everyone for your patience. Enjoy the picture of the rainbow bridge in the preview. It works really nicely with Dynamic Lighting.

Thanks everyone for your patience. Enjoy the picture of the rainbow bridge in the preview. It works really nicely with Dynamic Lighting.

How's adventure 4 coming along? Just wondering since i'm going to start the adventure this month.

I'm trying to get it out by the end of the month. A lot of other things have come up.

MarkM said:
@Zaukrie, we have also been looking at Foundry (I hear great things about it), Fantasy Grounds, and other platforms. The Zeitgeist AP and our sunk cost (time plus some of the books) made me decide to stay on Roll20 for now. A lot of the irritants and inefficiencies of Roll20 can be solved with macros and API. One could argue that a lot of that functionality and streamlining should just be baked into the product without the added ongoing cost of Pro and the pain it takes to start figuring out how to make it work, but after a week of struggling and number of YouTube tutorials I'm pretty happy with all the things I can do on Roll20. It was a learning curve, but less for me (and far less for the players) than changing systems. There are also lots of marketplace resources available on Roll20, whereas Foundry is still young.
Click to expand...

Wish you would reconsider FG. It had all of this and the capabilities you mention in the OP standard when I bought it 5 years ago. Glad for those of you on Roll20 that this type of stuff is now available for you, but as I said, I did all that on the standard license in FG 5 years ago (except dynamic lightning, which is new to FG).

I know Roll20 claims more users, but it might do you good to look at actual module sales numbers when deciding on the platforms you will support (or maybe you already have).

LordEntrails said:
Wish you would reconsider FG. It had all of this and the capabilities you mention in the OP standard when I bought it 5 years ago. Glad for those of you on Roll20 that this type of stuff is now available for you, but as I said, I did all that on the standard license in FG 5 years ago (except dynamic lightning, which is new to FG).

I know Roll20 claims more users, but it might do you good to look at actual module sales numbers when deciding on the platforms you will support (or maybe you already have).

There are other reasons that I will not discuss. Sorry.

Digging for Lies was great. It was not as intricate and complex as The Dying Skyseer (which may be my favorite adventure ever, but is not for beginning groups/players!) or as clear and fast paced as adventure one. It was in the middle - more linear (in a good way) than Skyseer but with more complex mysteries and plots than Island. We will do some housekeeping and wrap things up next week, then eagerly wait for Always on Time. Hopefully it is ready just in time!

Is this still a thing? If so any idea when Part 5 is out? Thread's been dormant for 5 months .

I'm hoping to have adventure 5 out late January.

Any idea what's happening with this? When it was first announced back in November 2020 the release schedule was supposed to be a new chapter every 1-2 months. There have been three more chapters released in the 15 months since, with nine chapters still to go.

Chapter 5 was supposed to be out at the end of January, but we're in March now and it hasn't been released. Is this project dead?

I am truly sorry for the delay. I am incredibly frustrated by it. Zeitgeist on Roll20 is definitely not dead, but there have been several things that have come up. None of them are great reasons for a schedule to slip, but they happened. Six products were released in the first 12 months of availability, and four of those were in the first 6 months. That is not were I wanted to be.

Much of 2021 was taken up with chapter 12 of War of the Burning Sky, which was the size of 2 adventures and very dense on level 20 content. I had wanted this to be completed earlier, but I was handling the 3.5 to 5e conversion, and several portions required rethinking to fit into 5e's encounter-building paradigm (especially with 3.5's assumption of being able to wade through dozens of low-level minions that doesn't work as well in 5e).

Real life has also come up over the last 12 months with several things that have taken more of my time than I wanted.

Zeitgeist has required me to supply more content myself (especially maps and art) than WotBS did. I had an idea this was the case, but the scope of additional content has been much greater than my initial impressions. This has increased as the chapters have progressed. For the maps especially, a lot of Zeitgeist's smaller encounters are presented as theater of the mind, which some people don't want in a VTT product. This means I spend a lot of time breaking down the description of a scene to try to give as faithful a map as possible. Sunset Bench for instance: 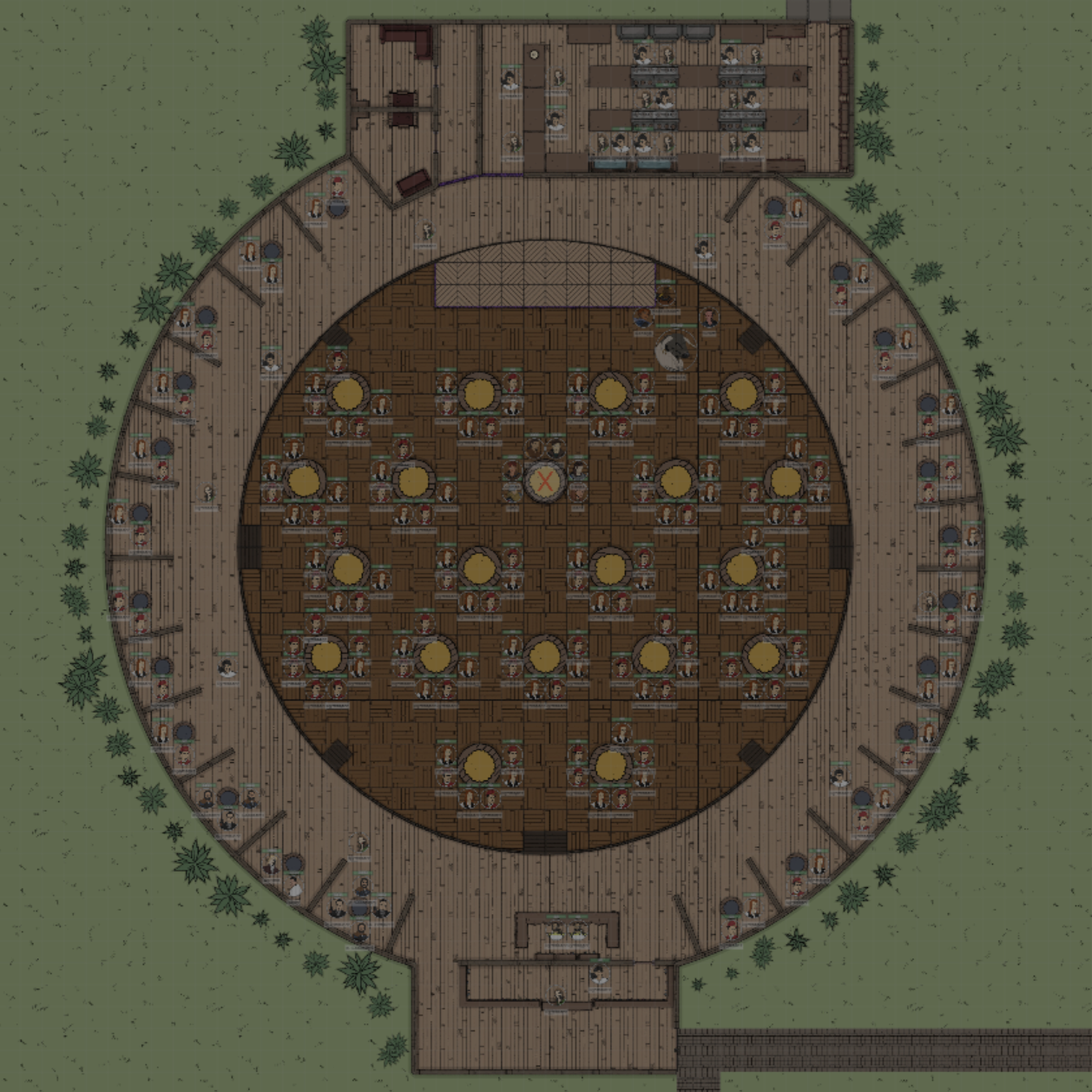 As another example, I just finished setting up the complex in adventure 5 and discovered that I need to create one more map for the entrance.

Roll20 approves new products on Mondays and Thursdays. If I can complete the fit and finish and the last map in time, Cauldron-Born will go out Thursday, otherwise, it will be out on Monday.

EDIT: It will be Monday. I needed to clean up the Coaltongue maps as I could not use the ones in the adventure 1 product.

Well, everything was ready to go, and something went wrong with building the marketplace product. I imagine Roll20 and I will try again tomorrow. Keep watching this space.

Thank you everyone for your patience.