Publisher
Cards are not just for magic tricks any more, as Legendary Games presents Second Edition Classes: Cartomancer for Pathfinder Second Edition! This new spellcasting class dabbles in every magical tradition as they draw power from a card deck that is equal parts weapon and magical focus. Mystical gamblers and masters of chance, cartomancers use their cards as tools for weaving spells with decks that may focus on divination, illusion, and mental manipulation through occult magic, elements and flora and fauna with a primal deck, raw power of life and death with a divine deck, or the diverse and balanced options of an arcane deck, along with over 50 class feats, a complete system of Card Casting, with nearly 60 unique spells you can heighten and empower by varying the number of cards drawn from your mystical hand. Plus nearly a dozen specialized card constructs to unleash on your enemies. Deal yourself in to an awesome new kind of class and grab this spectacular Second Edition supplement in PDF or print at the Legendary Games webstore, Open Gaming Store, Paizo, Amazon, or DrivethruRPG! 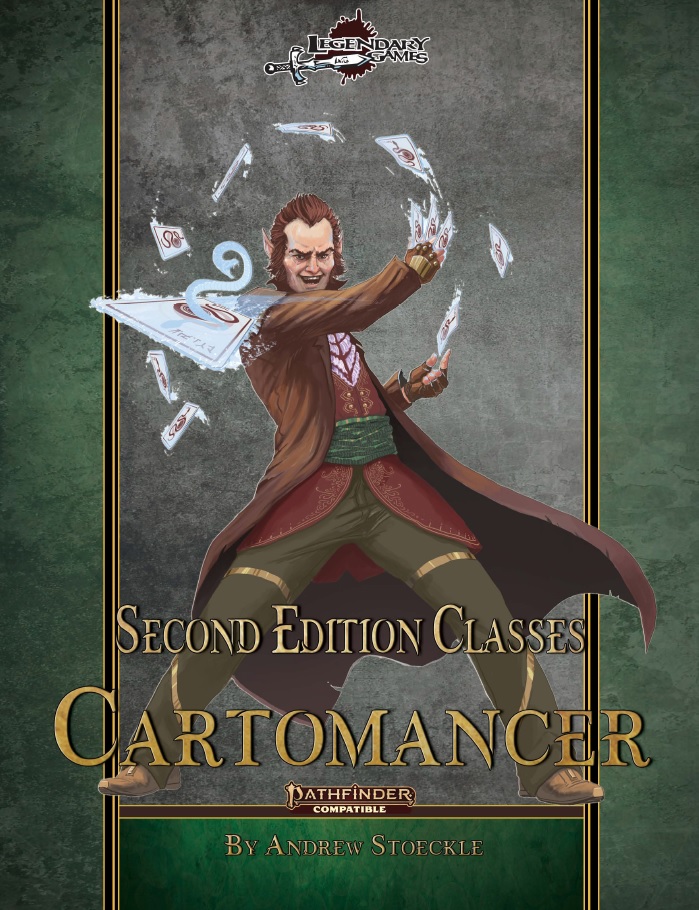 If you love exciting new options for Pathfinder Second Edition, you're in luck because the Cartomancer isn't the only one we've got headed your way in July. Already in layout and coming soon is the amazing Emissary class, perfect for every social situation. What can you expected in this book? Check out the preview below!

The emissary is an all-new class for Pathfinder Second Edition, melding the magic of arcane empires with the supportive skill of a trained ambassador. With five imperial origins from the knightly abjurant crusade with their bulky tornswords and defensive acumen to the fiery sands of flame with their regal war scepters and burning light, the emissary can master the social graces like no other. With more than 40 class feats from levels 1-20 like Catspaw Assault and Animal Sidekick, no two emissaries are the same! Whether braggadocious or cunning, a merciless intimidator or a gregarious gadabout, any emissary can brand their foes with their empire's mark, setting them up so their allies can lay them low. Plus, find the emissary multiclass archetype to splash some imperial graces into other classes, and several new mundane weapons used by those far-off empires. Grab this incredible new 26-page class book by veteran Pathfinder 2E author Sasha Laranoa Harving today and Make Your Game Legendary!