Just curious what others think: What 3 miniatures do you most hope to see in an upcoming Wizkids prepainted set? You can choose a theme if there is a spectrum of miniatures that is underrepresented.

Voor - These Least Yugoloths have not seen since the late 3E era (MM IV), but they are very common in my Homebrew setting as the dumb thug enforcers and guardians amongst the Yugoloth ranks. They're often found guarding lost treasures or mindlessly performing a simple task - but there is no great miniature for them. They're large and distinctive looking. I've used Chuul and Umber Hulks to stand in for them, but I'd really like to have 5 to 8 of these in mini form. There has never been a miniature for these creatures, and they're really useful from a story and strategy perspective in D&D - the ultimate Fiend Dumb Thug. 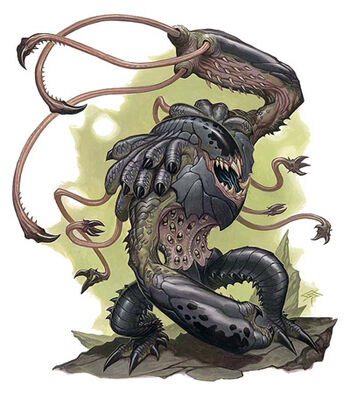 Roc - Of actual size. I've long felt like I should be able to find myself a Roc figure that was of the correct size somewhere out there in the world, even outside the D&D game options. The wingspan should be 3'5 feet or more using the 5' per inch scale. Outside of finding a stuffed Peregrine Falcon, I have been unable to find something that really conveys the pure size of these creatures in a way that gets across to the players. I almost pulled the trigger on a 'Barry the Bald Eagle' toy, but at a 57" wingspan it is a bit too large... Of course, if Wizkids did make it, I might not be willing to pay the $300 cost they'd charge for something this size.

Polearm PCs - There have been a few here and there, but not enough. I want a good spectrum of PCs using polearms so that if someone wants to play a Goliath, Dragonborn, Dwarf or Elf Polearm PC, they have a great miniature option available to them.

Hmmm ... A very good question @jgsugden . I will have to think on this for my top three. I likely could spam out a long list at the moment, but it would be all over the place in terms of priority.