Hello everyone, Darryl here with this week's gaming news! GURPS comes to Drive Thru, new Star Trek product release while a Star Wars product line comes to an end, a bit of game industry history, and more!


View attachment 92879​
After years of exclusivity to their own Warehouse 13 online store, Steve Jackson Games launched their line of GURPS products on Drive Thru RPG. The product line available includes 120 products ranging in price from $2.99 to $29.99, with new products being added daily to the site. The PDFs have been separated into two categories, GURPS for GURPS Fourth Edition products and GURPS Classic for Third Edition (though it’s possible earlier edition products may be included later in that line), both listed under the GURPS Rules System in Drive Thru RPG’s store. This follows last year’s announcement that several GURPS products would be available from Amazon as print-on-demand products, marking a major push forward for Steve Jackson Games’s RPG arm.

Modiphius launched a new expansion for Star Trek Adventures featuring character sheets for iconic characters from the Star Trek franchise. The first two PDFs available for $5.39 each cover Star Trek: The Original Series and Star Trek: The Next Generation. The TOS crew book is fifteen pages long and includes full statistics for Captain James T. Kirk, Commander Spock, Dr. Leonard McCoy, Lt. Commander Montgomery “Scotty” Scott, Lieutenant Hikaru Sulu, Lieutenant Nyota Uhura, Ensign Pavel Chekhov, Nurse Christine Chapel, and the USS Enterprise NCC-1701. The Next Generation crew is sixteen pages long and includes Captain Jean-Luc Picard, Commander William T. Riker, Commander Deanna Troi, Lt. Commander Data, Lt. Commander Geordi La Forge, Lieutenant Worf, Lieutenant Tasha Yar, and the USS Enterprise NCC-1701-D (the description does not include which, if either, of the two Next Generation doctors, Beverly Crusher or Katherine Pulaski, is included nor supporting crew and civilians like Lt. Reginald Barclay or Guinan, but the length indicates there may be other crew members than those listed). While there’s no date yet, Star Trek Adventures designer Nathan Dowdell stated on Twitter that other crews will be featured after someone (me, it was me) inquired about why Starfleet’s provably best captain, Benjamin Lafayette Sisko, wasn’t included yet.

A new publisher announced their entry into the tabletop gaming market, New Agenda Publishing. From their official announcement:


New Agenda Publishing is a consortium dedicated to promoting diversity in the RPG community through our hiring and choices. We want to amplify underrepresented voices and help them tell new stories from their perspective. We want to bring more people of color and especially women of color to the table and we think the best way to do that is by hiring them to help us create the games and worlds they want to play in.​

The current board members are Misha Bushyager, Jerry D. Grayson, and Eloy Lasanta. The aim of the new publishing collective is to promote more diverse voices in the tabletop roleplaying space with a focus on people of color. To help support the new project, NAP launched a Patreon, which will offer advanced previews of their products, playtest access, and other rewards for supporting their efforts.

Fantasy Grounds released information on what games people played using the virtual tabletop platform in 2017. As expected, Dungeons & Dragons 5th Edition dominates the list with 64% of games played, with Pathfinder coming in second at 12% and Savage Worlds coming in at third with 6%. Dungeons & Dragons 3.5 Edition had 4% with other games and editions making up the remaining 14%. It should be noted that the nature of Fantasy Grounds may skew numbers as the system has built-in tools for specific rules systems and “CoreRPG”, “MoreRPG”, and other generic systems for playing games that do not have an officially licensed module.

Fantasy Flight Games announced an end to the Star Wars: The Card Game living card game after the release of the most recent expansion. The announcement came in the press release for the final Force Pack of the Alliances cycle, Promise of Power, which focuses on characters and events from the Star Wars: Rebels animated series. From the release:


In addition to being the final Force Pack of the Alliances cycle, Promise of Power marks the completion of Star Wars: The Card Game. Over the past five years, Star Wars: The Card Game has seen five deluxe expansions and six cycles of Force Packs, ranging from the Battle of Hoth, through the pilots of the Rogue Squadron cycle, the forest battles of the Endor cycle, and the most recent changes of the Opposition and Alliances cycle. With the conclusion of the Alliances cycle, the game will be complete, and the Star Wars World Championships in May will be the final Organized Play World Championship for the game.​

The game final game line will include the Star Wars: The Card Game Core Set and a total of forty-one expansions spread among six cycles of six Force Packs each plus five deluxe expansions. It’s unknown at this time if the game will remain in print or be relaunched with a second edition (as was done after A Game of Thrones: The Card Game ended in 2015).

Target is looking to expand their offerings for new games once again, this time targeting the North American International Toy Fair to meet with game designers and publishers as part of a new Open Innovation Project. Applicants must submit a general application in one of several categories, the first listed being “Games” (additionally, the form lists dolls, activity sets, preschool toys, imaginative play, and other). Those selected will get a face-to-face meeting with Target executives during the trade show. The application is focused on business-related matters such as market research, prototyping, and patents more than an actual pitch for the game itself, and it requires that you be on-site for the late-February event held in New York City and was only announced on January 9, so it appears as though this is focused on those already looking to market new games and searching for an outlet. The deadline to apply is January 17. 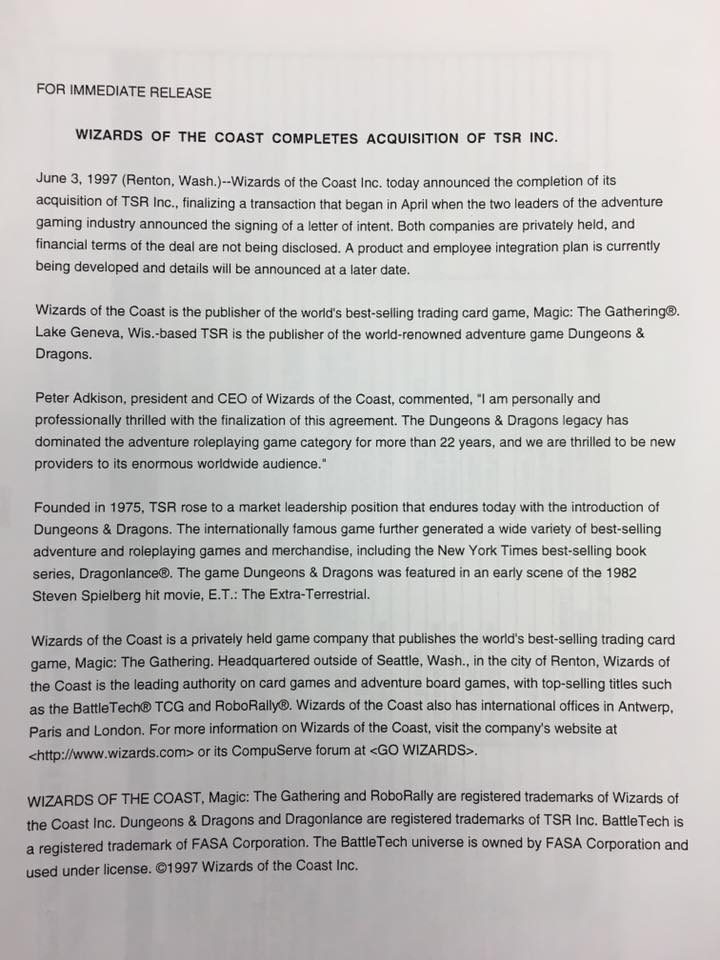 In a bit of gaming history, Alex Kammer posted on social media the press release announcing Wizards of the Coast’s acquisition of TSR Inc. It’s a window into the industry in the late 1990s, with Dungeons & Dragons described with the line “The game Dungeons & Dragons was featured in an early scene of the 1982 Steven Spielberg hit movie, E.T.: The Extra-Terrestrial” and Wizards of the Coast described as having “top-selling titles such as the BattleTech TCG and RoboRally”. There’s even a link to the Wizards of the Coast CompuServ Forum, though they were ahead of the time by having their own domain name. Also, “FASA Corporation” got two mentions in a press release about an acquisition that didn’t even involve them.

The D6 Generation is a podcast about tabletop gaming. And I mean everything tabletop gaming. This is a long-running long-form show whose episodes run well over two hours and frequently over three hours covering roleplaying games, board games, miniature wargames, and everything in between. This Patreon is structured as a “per episode”, but because of the length of the shows, they usually only release one or two episodes per month. Starting at the $2 level, you get access to the “Lost Chapters” premium content, which features content usually teased in the episodes themselves featuring bonus interviews, stories, and more. Additional levels include access to Patreon-exclusive streams, on-air shoutouts in the episode, and even the ability to join in a backer-only game at Gen Con (which requires signing up for the limited slot level two months before the event, so if you’re interested in the $20 level, you may want to jump in earlier rather than later or risk losing your spot). You can also listen to episodes of the show for free from the Patreon page if you want to decide if you’d like to support Craig and Russ.

Faerie Fire is the 5e supplement for anyone who wanted to add a bit of 80s glam to their Fae. The 104-page full-color supplement draws inspiration from the aesthetic of the 1980s and early 1990s, even citing Trapper Keeper as an influence. The art is filled with neon pink and purple that looks like it could double for cover art of a new wave band. The book includes playable races, monsters, NPCs, magic items, and more. The PDF is available for a $15 pledge, while a physical copy is available for $30 with more backer levels for art prints and postcards. This project is almost halfway to its funding goal, but has until Wednesday, February 7 to make it to its $22,000 goal.

The Dice Tower is running their annual crowdfunding effort for their 14th season of the popular board game podcast network and YouTube channel. This is less a traditional Kickstarter campaign the way we think of it and more a fundraising drive with pledge levels as rewards for the level you back, closer to the original intent of Kickstarter. I don’t even know where to start listing the backer rewards and add-ons, which feature exclusive expansions for games, Dice Tower branded merchandise, personalized videos/recordings, meet-and-greet opportunities, game aids and accessories, and a lot more. This project has several stretch goals for additional material to go through before it funds on Wednesday, January 31.

That’s all from me for this week! Find more gaming crowdfunding news at the EN World RPG Kickstarter News website, and don’t forget to support our Patreon to bring you even more gaming news content. If you have any news to submit, email us at news@enworldnews.com. You can follow me on Twitter @Abstruse where I’ve been giving context-free comments as I binge-watch Farscape for the first time, follow Gamer’s Tavern on YouTube featuring videos on gaming history and Let’s Plays, or you can listen to the archives of the Gamer’s Tavern podcast. Until next time, may all your hits be crits! Note: Links to Amazon, Humble Store, Humble Bundle, and/or DriveThru may contain affiliate links with the proceeds going to the author of this column.
Click to expand...

Darryl Mott is a tabletop gaming and media journalist with bylines from outlets including Ain't It Cool News, EN World, and Zombie Orpheus Entertainment. He also makes videos for YouTube and does live streams on Twitch as well as doing post-production and editing for the Morrus' Unofficial Tabletop RPG Talk podcast.
V