From the Necropolis to the Lost City! As trusted teachers at the Magaambya school of magic, the heroes are sent on a delicate diplomatic mission to a city ruled by an evil mummy-god. During these negotiations, the heroes unearth the location of a wondrous hidden village that needs the Magaambya's knowledge and protection. But the mummy-god's military is on the march. If the heroes can't thwart the army, it will plunder the village's treasures and unleash an ancient evil contained since the world was covered in darkness!

"Secrets of the Temple-City" is a Pathfinder adventure for four 12th-level characters by Luis Loza. This adventure continues the Strength of Thousands Adventure Path, a six-part, monthly campaign in which the heroes rise from humble students to influential teachers, and ultimately decide the fate of the Magaambya. This adventure also details the other teachers that are the heroes' peers and presents a comprehensive look at Walkena, the evil child mummy-god of Mzali. New monsters, new magic, and new diplomatic options provide a bounty of opportunities for adventure! 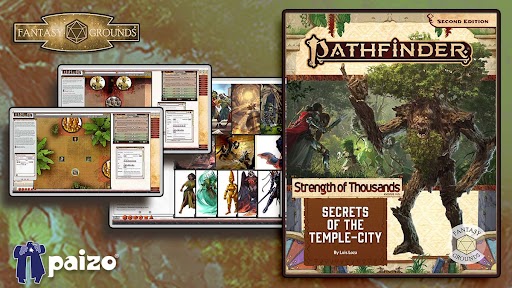