For thousands of years, the Immortal Principality of Ustalav has labored beneath the legacy of its dark past. Within the shelter of its mist-shrouded hills and decaying, decadent cities, things that have no right to live stalk the night, and superstitious residents lock their doors tight against the howls and scratchings that summon them forth. Vampires, werewolves, undead monstrosities, and stranger things make their homes here, and even those fools who ignore such threats tremble at the thought of the Whispering Tyrant, the nation's former conqueror, who even now shifts restlessly beneath his prison-tower of Gallowspire. Though most of Ustalav's citizens are ordinary men and women, canny urban merchants, or fallen nobles coasting on their last shreds of wealth and reputation, no one here dares peer too far into the shadows, for fear of what might be looking back.

Rule of Fear provides a comprehensive overview of the nation of Ustalav, a realm of urban intrigue and gothic horror, and the setting of Pathfinder Adventure Path's Carrion Crown Adventure Path. 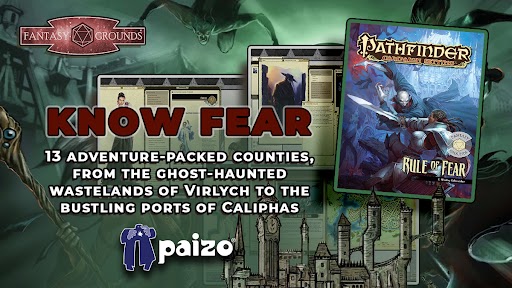