"King of the Mountain" is a Pathfinder adventure for four 18th-level characters. This adventure concludes the Ruby Phoenix Tournament Adventure Path, a three-part monthly campaign in which the players compete in Golarion's most amazing international fighting tournament. This adventure also includes a gazetteer of exciting demiplanes found across Golarion, inspiring lore about the epic fighting tournaments in other corners of the multiverse, and a mountain of new monsters.

All maps are resized and set up with a preset grid to make combats easy to manage
*Individual area descriptions linked to maps, containing new encounters, treasure parcels, and descriptions for just that area
*Tokens for each encounter are all pre-placed in starting locations on the map. You can edit these on the fly.
*Drag and drop treasure parcels and Encounter XP that is easily awarded to your players to keep the game moving ahead
*All the images and handouts from the book are available to share with your players as you need them 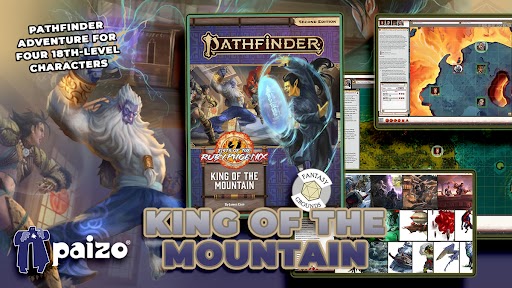