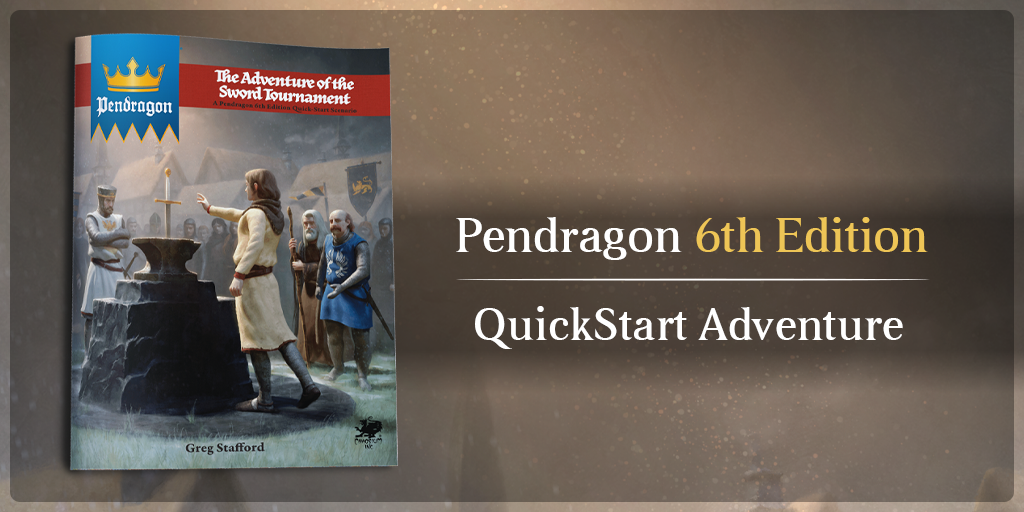 The classic roleplaying game Pendragon has a new quickstart set, The Adventure of the Sword Tournament. This quickstart is for the upcoming 6th Edition of the Arthurian RPG Pendragon considered to be the magnum opus of legendary designer Greg Stafford that tells the story of the tournament where King Arthur pulls the sword from the stone.

Over on DriveThruRPG, we have a pair of RPGs meant to turn worldbuilding into a game itself. The first from Raspberry Lane Games is Pantheon, a solo game that allows you to create your own mythical Gods and develop the legends surrounding them.

Next from WatcherDM is QuestionCrawl, a one-page RPG to allow the entire group to create the world from geography to factions to wonders and more. All you need is a deck of playing cards and a six-sided die to create an entire world in just a couple of fun hours.

And now we have a pair of games that are obviously inspired by something they take great pains not to name for legal reasons. The first is Miners & Makers from Douglas J Coughler which is an RPG featuring pixel art that’s about crafting things that you’ve mined. This is a full rules-lite game inspired by the design of Grant Howitt that has everything you need to Mine and then craft as you explore the world.

And from Porcupine Publishing, Indomitable Gauls is a family-friendly adventure game that pits the plucky Gauls against the devious invading Romans. If you’re familiar with the French-Belgian comic Asterix, you know exactly what to expect from this game.

This is my first time seeing this series, but Alexey Aparin has a collection of STL files for 3D printers called Pocket Lands, sturdy small figures of various races and classes scaled to use as miniatures. The newest pair this week are the Elf wearing a cloak and drawing a sword and the Rogue wearing a hooded cloak holding a dagger. The aesthetic is vaguely chibi inspired and the squat figures are designed to be durable enough to be thrown in your dice bag and rattled around without any damage. These two entries bring the series up to eight total figures ready for your home 3D printer.

Icarus Games looks to help you make more use of your 5e DM screen with a collection of inserts. The collection of condensed tables can be printed and added to your DM screen for quick access to a monster builder, NPC generator, weapon damage table, conditions table, and more.

Over on DMs Guild, you can probably guess the order of the week has been Spelljammer. Specifically several new variations on the combat rules. First from Michael Hammock, we have Spelljammer 5e Theater of the Mind Ship Combat Rules that will allow you to engage in ship-to-ship combat without needing a map and miniatures or tokens.

And for those who want more detailed combat rules, Atrus has Spelljammer Combat Expanded with more options for player characters to get involved in the combat with special actions, group checks, and new stat blocks for ships and their artillery weapons.

For those wanting more to explore in Spelljammer, Jesse Winter released Worlds of Wildspace: Crakateg. Travelers to this world are faced with an overwhelming sense of ennui, pushed to just give up on their mission due to the hopelessness of existence and join the population that exist spinning their wheels for no purpose. Okay, that’s a bit of a mood.

The fan creation portals Pathfinder Infinite and Starfinder Infinite have a huge sale going on. Similar to DMs Guild or Storyteller’s Vault, the two Infinite storefronts allow creators to make their own material for Pathfinder and Starfinder beyond what is allowed by the standard OGL releases. Over six hundred titles are on sale as part of the event so it’s a great time to find some interesting or niche third-party content.

If you remember I previously talked about the PocketQuest game jam from DriveThruRPG, there’s not multiple collections available to pick up a plethora of titles under the theme “Summer Camp”. There are three genre-themed bundles: Flashlight Bundle for horror games, Dark Comedy Bundle for humorous games, and Sunny Bundle for whimsical and cheery games, plus one MegaBundle featuring all three.

And the Spelljammer flood wasn’t limited to just free content as we have two different bundles of new classes for the setting. From Mitchell Turnbull, the Spelljammer Class Bundle includes three new classes: Channeler, Golemancer, and Spellslinger.

And we also have another Spelljammer Classes Bundle from Stratos Folakis featuring not just the new classes for the Gunslinger and Psion, but a full Psionic Handbook with over 200 psionic spells. 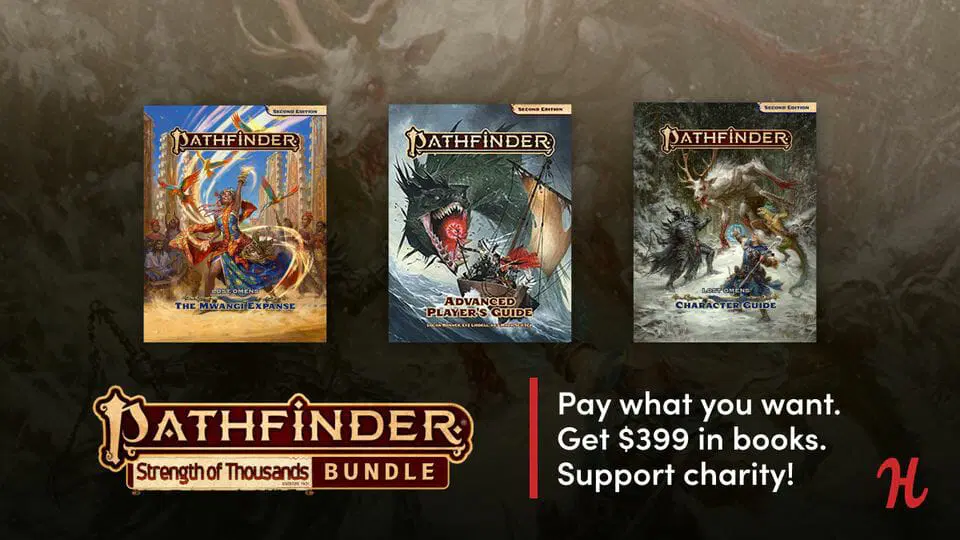 Bundle of Holding also has a pair of bundles for Legacy: Life Among the Ruins, a Powered by the Apocalypse RPG about building a new world in the ruins of the future. The first bundle has the core rulebook along with an inspiration artbook and a soundscape, along with a Level-Up option to add on four different campaigns including Generation Ship, Primal Pathways, Godsend, and Worldfall.

The second bundle is yet another expansion of new settings and campaigns for Legacy: Life Among the Ruins with six more books: The Engine of Life, End Game, Wasteland Almanac, Rhapsody of Blood, Rhapsody of Blood: Terra Incognita, and Free From the Yoke.

If you want giant robots shooting lasers and missiles at each other, there’s no better place to go than the original with BattleTech. The BattleTech Total War Bundle of Holding comes with everything you need to get started with both the tabletop wargame and the roleplaying game with MechWarrior: Destiny for roleplaying, the comprehensive tabletop wargame rules with BattleTech: Total Warfare, and the custom mech building and technical upgrade sourcebook BattleTech: TechManual at the core level. There’s also a bonus collection add-on that expands the rules even more with Strategic Operations that covers space battles, Campaign Operations for managing units from small mercenary companies to entire House regiments, and Tactical Operations: Advanced Rules for new battlefield tactics, weather and biome rules, artillery, and a lot more.

Humble also has a bundle of video games with a lot of TTRPG-based titles you might have heard me talk about before once or twice. The Storied Strategy & Roleplaying bundle features the entire trilogy for Shadowrun Returns (Dead Man’s Switch, Dragonfall, and Hong Kong), the BattleTech Mercenary Collection that includes all DLC for the game, the spiritual successor to Obsidian’s previous D&D titles Pillars of Eternity, Age of Wonders: Planetfall, Pillars of Eternity, and Knights of Pen & Paper 1 & 2.

The Maps Spectacular bundle is back with a massive collection of map-making software and assets. The bundle is broken into four tiers each adding on more options including City Designer 3, Dungeon Designer 3, Campaign Cartographer 3, and plenty of toolkits, art assets, symbol sets, and source maps to design any map you could possibly need for fantasy, modern-day, or science fiction campaigns.

Humble Bundle also has a massive collection of classic-inspired books in the Essential Classic Fantasy RPG Bundle. There’s five tiers total each packed with OSR rulebooks, sourcebooks, adventures, expansions, and more plus system-neutral setting books and map packs. The bundles range from seven books including the core rules for Old-School Essentials all the way up to a total of 59 books including one physical hardcover at the top tier.