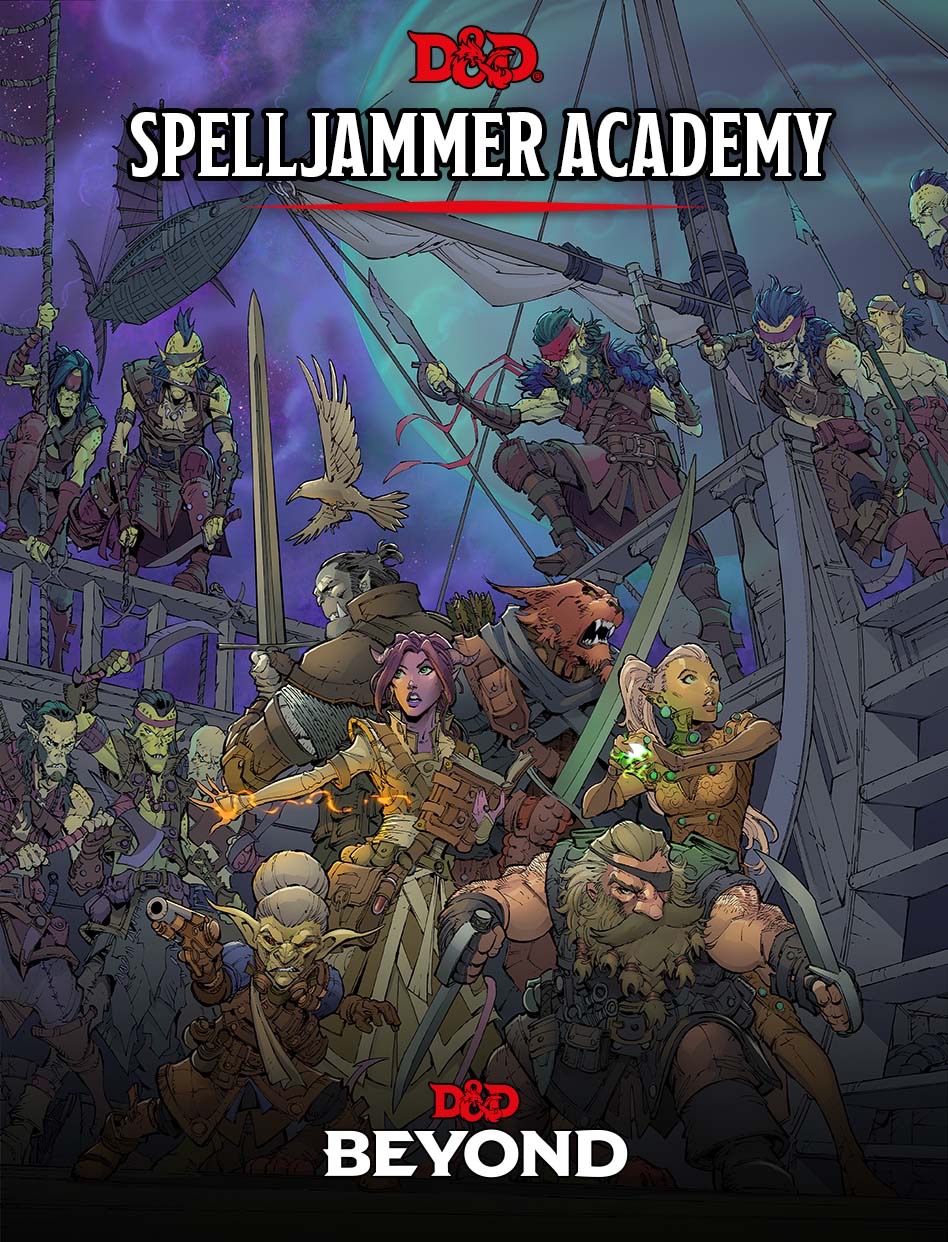 D&D Beyond released the first of the Spelljammer Academy adventures meant to introduce the classic setting to new players. The adventure titled “Orientation” is for first level characters and takes about two hours to run placing the cadets into a simulator to learn the ropes before their first adventure.

The OSR-inspired RPG Rascals places the players in the roles not of glorious heroes, but the downtrodden who seek to improve their lives by looting an ancient tomb or helping a village ward off an ancient curse. The trick is you have no magic and you don’t level up, so the goal is to simply survive. The game is also released under the Creative Commons Attribution 4.0 license so you can use it to create your own content as well.

Christian Eichhorn released NEON BORG, a solo microadventure for CY_BORG. You live in NEON BORG, a prison for the worst of the worst criminals that has been converted into subsidized housing and is now an overcrowded nightmare of aged corpkillers, filthy nanomancers, burned hackers, and you.

Okay, I have the opening theme to Sailor Moon stuck in my head thanks to this one, but the Magi-Knights Project brings us the 5e Magi-Knights Supplement that converts 5e to support magical transforming girl and Sentai-style heroes.

Over on DMs Guild, we had yet another week packed full of subclasses. All of these are Pay What You Want with the Suggested Price listed.

Modiphius is celebrating 2d20 Day with a limited-time two-day sale of 20% off all print and PDF core rulebooks for the 2d20 System games in their store including Dune, Achtung! Cthulhu, Fallout, and more. This will also mark the release of the 2d20 System SRD so expect to see many more new products coming soon from third parties.

Pink Dice Bag Publishing collected several fantasy locations generators into a bundle for DriveThruRPG. For those times when you quickly need a castle, catacomb, cave, inn (with menu), farm, NPCs, kingdoms, villages, or more including names, this collection of 20 products has plenty of random tables and pre-generated examples to drop into your game at a moment’s notice.

S0LU7I0N released a collection of maps for any near-future setting like Shadowrun, Cyberpunk Red, and others. And not only that, but they’re animated for that extra bit of awesome for your VTT games. Maps include corporate HQ, corporate reception area, apartment complex, bank, diner, media office, night market, store interior, streets, ganger hideout, and more. There’s also a 4K version

Over on DMs Guild, we have Grimbuckle’s Crafting Guides with four different collections with rules to create your own items including enchanting magic items. Smithing and Smithing II cover weapons and armor, Jewelry Edition covers amulets and rings, and Enchanting Edition features rods, wands, and staffs making for a grand total of over 200 crafting recipes. 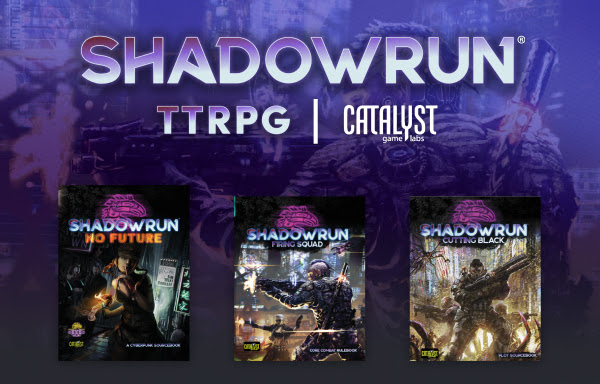 Steve Jackson Games has a new t-shirt raising money for reproductive rights on their Redbubble store. The artwork from Katie Cook features Flower, one of the mascots of Munchkin, along with the animated axe in front of a sign saying “Our Bodies, Our Choice”. As usual, Redbubble has issues with art thieves so be sure to use the link above or verify that you’re on the official Steve Jackson Games store titled “SJ-Games” before ordering your t-shirt, hoodie, sweatshirt, tank top, coffee mug, tote bag, sticker, pin, or magnet.

The Fading Suns 4e bundle brings together the core rules for the newest edition of the far-future science fantasy RPG. The Core Collection gives you all three Fading Suns core rulebooks plus the Fading Suns 4 Play Kit and the Bonus Collection adds on two sourcebooks and three Imperial Dossiers.

Bundle of Holding has not one, not two, but three bundles for Steve Jackson Games’s GURPS series. The first is GURPS 4e Essentials giving you the core rules to the original generic roleplaying game system. For those who don’t know how GURPS works, it’s the Generic Universal Role Play System and has a base rules system that you can then add whatever options you want to create whatever genre of game you want. The base level includes the GURPS 4e Basic Set, GURPS Template Toolkit 1, Adaptations, the GURPS 4e GM screen, and a guidebook How to Be a GURPS GM. There’s also a level-up option that adds on six GURPS 4e tech supplements and GURPS Mass Combat.

The second bundle is GURPS 4e Space which adds a collection of science fiction options to your GURPS games. The core bundle features GURPS Space 4e, GURPS Spaceships, and GURPS Psionic Powers with a level-up option that adds six spacecraft catalogs, three psionics sourcebooks, and the campaign setting Tales of the Solar Patrol.

And the third bundle is another genre pack for GURPS 4e Fantasy featuring a core bundle with GURPS Fantasy 4e, GURPS Magic 4e, the campaign setting Banestorm, and the magic item collection Alphabet Arcane. The level-up option adds on the sourcebook Thaumatology and six expansion books in the Thaumatology series.

Aconyte, the fiction publishing arm of Asmodee, partnered with Humble Bundle for the Fantasy Gaming Fiction Book Bundle. This bundle has three tiers featuring novels from a variety of roleplaying game, board game, and video game franchises including Legend of the Five Rings, Arkham Horror, Descent: Journeys in the Dark, Assassin’s Creed, Watchdogs, and more.

For those looking to create their own RPG video game, the RPG Maker Resurrection Bundle gives you everything you need to create your own video games. Not only does the bundle include multiple versions of the RPG Maker Engine but a library of assets, tile sets, scripts, animations, sound effects, music, and more to craft the RPG video game you’ve always wanted.

Bad link or bad deal?
Over on DMs Guild, we have Grimbuckle’s Crafting Guides with four different collections with rules to create your own items including enchanting magic items. Smithing and Smithing II cover weapons and armor, Jewelry Edition covers amulets and rings, and Enchanting Edition features rods, wands, and staffs making for a grand total of over 200 crafting recipes.

VicsHacienda said:
Bad link or bad deal?
Over on DMs Guild, we have Grimbuckle’s Crafting Guides with four different collections with rules to create your own items including enchanting magic items. Smithing and Smithing II cover weapons and armor, Jewelry Edition covers amulets and rings, and Enchanting Edition features rods, wands, and staffs making for a grand total of over 200 crafting recipes.

Looks like it expired after I posted it. Unfortunately, most bundles on DriveThruRPG, DM's Guild, Storyteller's Vault, etc. don't list when they're ending.