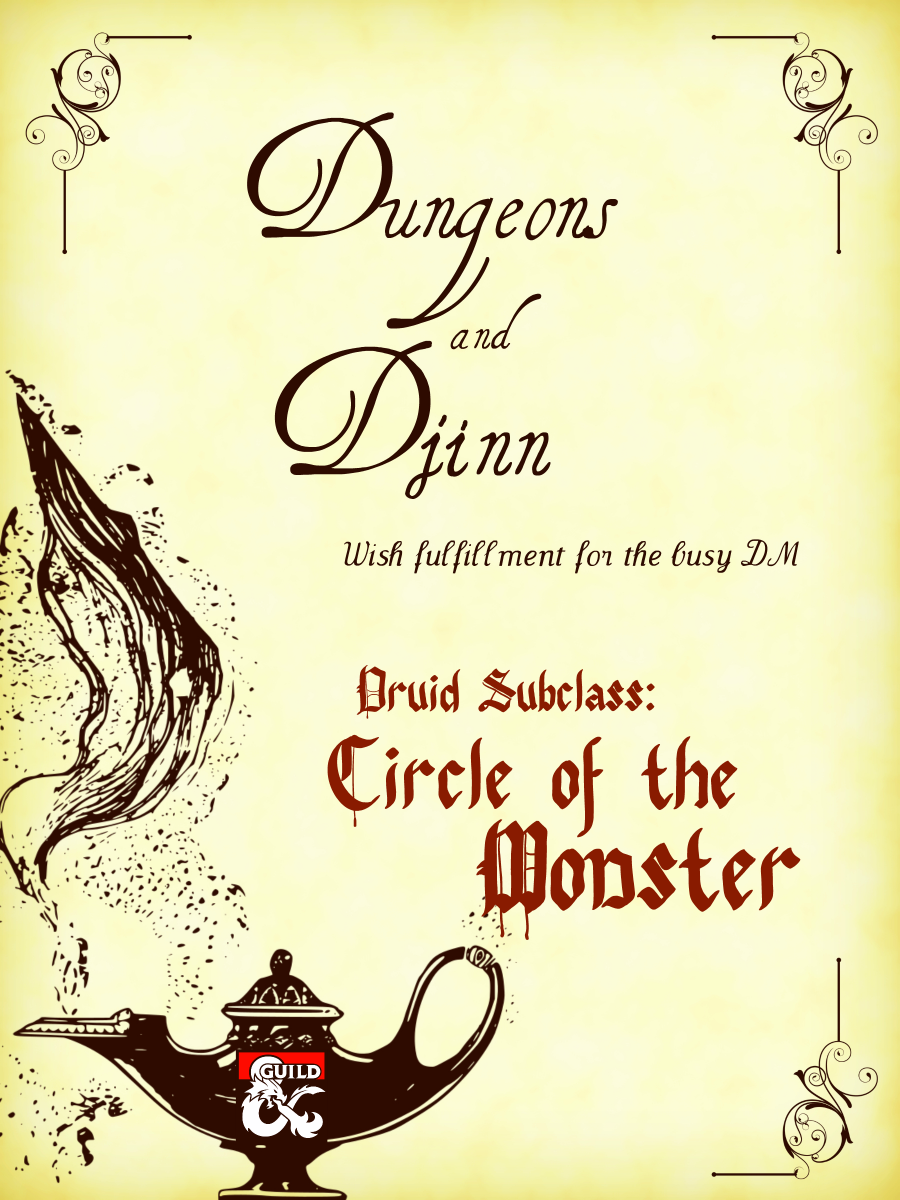 Druids can wildshape into owlbears. There. Can we stop talking about this now please? DM Sarah (the host of the Level Up: Advanced 5e live stream The Star-Crossed Seaway) with her player Lars Torgensen released the Druid subclass Circle of the Monster on DMs Guild that lets druids wildshape into a collection of monstrous creatures.

Orthrix released Interview with a Mage, a duet-play adventure for a lower-level character with adjustments for mid-level. The module is designed around 4-5 short sessions of 1-2 hours each as the player applies for a job as the assistant to a powerful wizard who has an…interesting (read: deadly) approach to the job interview process.

Yo dawg, I heard you like random tables, so we put some random table magic items into random tables! Is that meme too old? Anyway, Dev Waslusky released The BIG Random Table of MAGIC ITEMS that also have RANDOM TABLES, a collection of eight different magic items on a d8 table each of which have their own random tables for their abilities.

As I mentioned the last two weeks in the News Digest column, Modiphius released a System Reference Document for the 2d20 System and has now made it available on DriveThruRPG. While this is not Open Gaming Content, it does give you a bare-bones version of the 2d20 System rules that powers most of Modiphius’s releases including Star Trek Adventures, Fallout, Conan, and many others.

Lucky Rat Press has the wild west setting Gallants & Gunslingers for use with any B/X-derived OSR game system. The setting comes with five new western-themed classes, a spellcasting system based on a poker deck, dueling rules, and of course rules and stats for firearms.

I always love a good GM quick reference resource, and the Space Sci-Fi Quick Plots and Villains from Raymond Towers looks to be a great tool for quickly coming up with plots and NPCs when the players go off the planned adventure.

It’s the Christmas in July sale on DriveThruRPG with discounts on thousands of titles across the site including titles like The One Ring, Fallout, Cyberpunk RED, Return of the Lazy Dungeonmaster, Minsc and Boo’s Journal of Villainy, Shadowrun Sixth World Companion, and…seriously, if there’s a product you’ve been interested in on DriveThruRPG, this may be the best time to pick it up.

If you picked up the Fallout RPG either during last week’s 2d20 Day sale or the above-linked Christmas in July sale, you’ll probably also want some good post-apocalyptic maps. Amatsu has our first bundle of maps, this one a Mad Max inspired road collection.

And from Episodic Maps, we have a bundle of desert houses and buildings perfect for Fallout games in the NCR or Mojave, Star Wars games on Tattooine, or any other contemporary or sci-fi desert setting.

The Tabletop Engineer put together the Sci-Fi Horror RPG Mini Scenarios Collection 1 featuring four different system-neutral one-shot adventures ready to be inserted into any game. Just slot in the NPC and creature stats from your system of choice and you’re ready to go.

Ulisses Spiele put together a Torg Eternity collector’s dream with not one, not two, not three, but seven themed bundles. The Core Bundle features all the rules and decks you need to play plus several useful accessories and sourcebooks, which each of the other themed bundles feature setting books, adventures, maps, decks, soundtracks, and more. Note: I am having trouble personally loading the Torg Eternity Core Bundle page on multiple browsers so it’s only listing seven titles, but more may be included in the bundle. 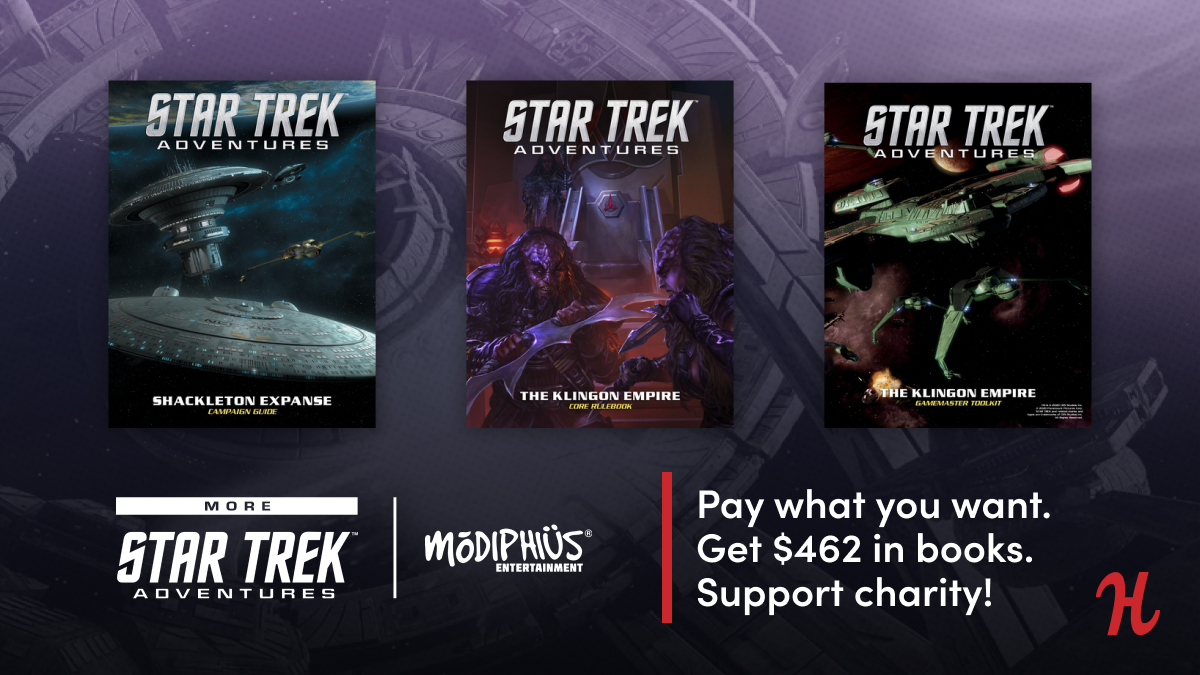 Steve Jackson Games has a new t-shirt raising money for reproductive rights on their Redbubble store. The artwork from Katie Cook features Flower, one of the mascots of Munchkin, along with the animated axe in front of a sign saying “Our Bodies, Our Choice”. As usual, Redbubble has issues with art thieves so be sure to use the link above or verify that you’re on the official Steve Jackson Games store titled “SJ-Games” before ordering your t-shirt, hoodie, sweatshirt, tank top, coffee mug, tote bag, sticker, pin, or magnet.

Over on Bundle of Holding the transhumanist RPG Eclipse Phase 2nd Edition bundle has the core rulebook, three adventures, and four Phase Nano Ops. In Eclipse Phase, you’re no longer shackled to your body as you can just upload your consciousness to a new shell, but this technology hasn’t saved us from a war with AI that humanity is losing.

Mongoose Publishing has the Encyclopedia Arcane Bundle on Humble Bundle featuring over two dozen D20 System sourcebooks from back in the 3rd Ed OGL era of 2001 to 2004 about all aspects of magic. Divine magic, chronomancy, fey magic, shamanic casting, psionics, and more all collected in one bundle.

The Fading Suns 4e bundle brings together the core rules for the newest edition of the far-future science fantasy RPG. The Core Collection gives you all three Fading Suns core rulebooks plus the Fading Suns 4 Play Kit and the Bonus Collection adds on two sourcebooks and three Imperial Dossiers.

There’s only a couple of days left in the Amazing Adventures 5e Bundle is full of pulp action and adventure from a variety of genres using the 5e rules. The Starter Collection features the Amazing Adventures 5e core rules, the sourcebook Brotherhood of William St. John, and the sandbox adventure Ruins of Ends Meet while the Bonus Collection adds on an additional three more adventures.

Space. The final frontier. These are the voyages of whatever ship you want to play on. Your mission. Explore strange new worlds. To seek out new life and new civilizations. To boldy roll 2d20 to determine degrees of success or failure! Yes, there’s a Star Trek Adventures bundle on Humble Bundle featuring a vast library of books for the Modiphius game. The $1 tier gets you the Star Trek Adventures Starter Set and the IDW Year Five Tie-In in PDF along with a 20% off coupon in Modiphius’s store, the $20 tier adds on the Player’s Guide and Gamemaster’s Guide for both Federation and Klingon campaigns and the Shackleton Expanse campaign setting, while the top tier for $30 features a whopping 32 titles adding to the above the Core Rulebook, all three division supplements for Command, Science, and Operations, character packs for Deep Space Nine and Voyager, supplements covering both the Alpha and Beta quadrants, map tiles, adventures, and more.

For those looking to create their own RPG video game, the RPG Maker Resurrection Bundle has been extended and gives you everything you need to create your own video games. Not only does the bundle include multiple versions of the RPG Maker Engine but a library of assets, tile sets, scripts, animations, sound effects, music, and more to craft the RPG video game you’ve always wanted.

At this rate, I think I'd only have TWO books left to get thanks to these Modiphus Star Trek Adventures RPG Humble Bundles.

Generally, I support Humble Bundles. I'm not supporting the Modiphius Star Trek one, however, as they employed Gareth Skarka to write some of the material. While I wasn't a backer, Gareth has been promising fulfillment of his Kickstarter project "Far West" for over 11 years. He's found time to write loads of materials for other companies, but has basically fulfilled nothing on his own, and probably doesn't even have the KS funds to publish when and if it is ever ready.

By all means, if you want the material cheap, go for it. I don't need it, nor from what I've seen, do I really want it, to be honest.
But in general, I believe you shouldn't support businesses that hire what would be considered a 'criminal' to do work for them.