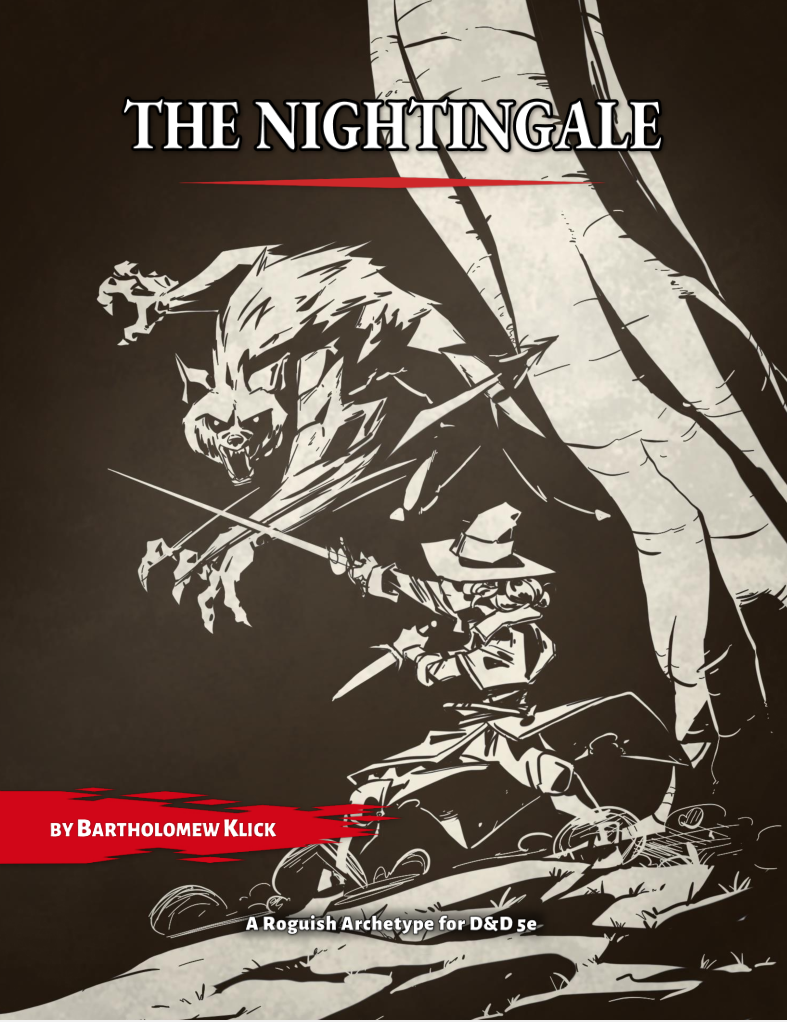 Wilsonian Games brings us an interesting mash-up bringing the ability to play in the “Sixth World” using CY_BORG rules. The templates allow players to create the standard playable races from Shadowrun using the CY_BORG rules, covering the Dwarf, Elf, Ork (yes, with a k), and Troll.

Ever looked at fantasy RPGs and wondered why they bothered with any other class than bard because they’re obviously the best? Well then By String and Song by Ethan H. Reynolds is for you, a short d20 based RPG where everyone’s a bard.

Bartholomew Klick released The Nightingale, a rogue archetype that lets you bring out your inner anti-hero. This third-caster subclass gains access to the Paladin spell list as a third-caster with a focus on locking down a single target in combat to allow the rest of the party time to breathe and take care of the rest. The PDF also comes with a FoundryVTT compendium.

Over on DMs Guild, Luke Beahan gives us City Adventures, a small supplement to help expand your 5e urban campaigns. Seven new backgrounds for city-dwelling PCs, a new rodent race, and a table of city adventures seeds ready for the fantasy mass population center of your campaign.

I’ve always felt it odd that there’s not really a good class choice for archers as the existing martial classes don’t have the focus you’d expect. Daniel Yim apparently feels the same with the release of Archer Class & Subclasses featuring a full martial class dedicated to the bow with three subclasses: The Gadgeteer, The Show Shooter, and The Yonru.

As you know from previous columns I love random tables for quick prep and idea brainstorming, and Dndspeak certainly came through with five different tables! All are Pay What You Want with a suggested price of $1.00.

DriveThruRPG is on Week 2 of their September System Sale and this week, it’s all about Mörk Borg. Sixty-five titles on sale from the core rules to adventures to supplements to settings.

Skirmisher Publishing collected 21 titles from their catalogue for the 5e Megabundle. Adventures, campaign settings, sourcebooks, and more plus Speed Round 5e: A Guide to Streamlining Remote Tabletop Games.

For those wanting to get ahead of the spooky season coming in October, Fat Goblin Games has a massive bundle of 5e horror games. A total of 44 titles with new monstrous races, horrific magic systems, guides to terrifying locations, new skill systems for monster lore, magic items, and a lot more including plenty of frightening adventures. 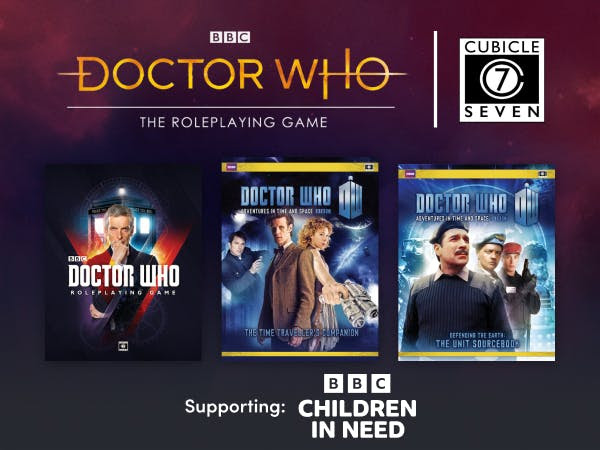 Over on Bundle of Holding, Palladium has the Heroes Unlimited Bundle featuring all you need for Kevin Siembieda’s superhero RPG. The Starter Collection features Heroes Unlimited 2e, Powers Unlimited, Villains Unlimited, Century Station and Mutant Underground. The Bonus Collection adds on the Game Master’s Guide and four more setting and campaign books plus a collection of paper miniatures.

Green Ronin brings us a bundle for True20, the streamlined d20-based RPG derived from Mutants & Masterminds. The Core Collection gets you the True20 Revised Corebook and the True20 Bestiary with everything you need to play, while the Bonus Collection adds on three True20 role handbooks along with expansions for fantasy paths, true sorcery, and cybernetics.

Also on Bundle of Holding, there is a pair of bundles for Dungeon Crawl Classics by Goodman Games. The first for those new to DCC is the DCC Essentials Bundle with everything you need to get started. This bundle features the Dungeon Crawl Classics Role Playing Game core rulebook, Judge’s screen, and a pair of adventures, Sailors on the Starless Sea and The Black Heart of Thakulon the Undying.

Humble Bundle and Cubicle 7 is ready to help you have adventures across time and space with their Doctor Who bundle. This isn’t the 5th Edition version, but the BBC-licensed custom rules system built specifically for adventures in the TARDIS. Even the base $1 level gets you the first edition core rulebook for the custom rules system along with three adventures while the $10 level adds on the Aliens & Creatures guide and sourcebooks for the first three incarnations of The Doctor and the top-tier $18 level gets you the Twelfth Doctor Edition of the core rulebook, sourcebooks for all the Doctors up to the Twelfth, books for Companions, UNIT, and the Black Archive, and a lot more for a total library of 28 books.


That’s all for this week! If you know of any bundles or sales starting soon, please contact me on the EN World Discord or send me a message here on EN World. Discount percentages have been rounded to the nearest whole number and are based on the standard retail price provided by the site. Note: Links to Amazon, Humble Store, Humble Bundle, Fantasy Grounds, and/or DriveThruRPG may contain affiliate links with the proceeds going to the author of this column.
Last edited: Sep 11, 2022
Click to expand...

Darryl Mott is a tabletop gaming and media journalist with bylines from outlets including Ain't It Cool News, EN World, and Zombie Orpheus Entertainment. He also makes videos for YouTube and does live streams on Twitch as well as doing post-production and editing for the Morrus' Unofficial Tabletop RPG Talk podcast.
V

True 20 was underappreciated for its time.

Yeah, True 20 is very cool. I wish their Sanctuary/Black Company stuff was T20 and not D20.

I grabbed the Dr Who bundle, even though I am not sure why they included three different Core books in it, but even factoring out the cost of the two older ones, it is still a great deal and a good charity. I made sure to put in a decent chuck over the minimum for it and used the custom adjustment to up the portion going to the charity.