D&D General Setting a campaign on a river

The Fear of a Black Dragon podcast has reviewed a few "river orientated" scenario/campaigns in its time. Death on the Reik of course but also (and especially here) Qelong & for ambiance a background Yoon-Suing...

Epic
So, you're saying you want a game in which you and the players are ... rollin' on a river?

Here is an idea for the settlements that players will encounter and where they can trade and rest, and their populations.

After that it's only friendly locals at best, which can only offer shelter, food, and some healing for trade.

I might be using an XP for gold system, maybe alongside a system of XP for discovery. In that case, characters get XP only once their treasure has reached the Blue City and goes into a vault. Until then, it still can be stolen or otherwise lost, and the players don't get a reward.
Alternatively they could get the XP as soon as they reach any of the Outposts or a protected fort they establish in the wilderness. I can imagine maintaining larger ships and paying crews could be a great permanent money drain, making the loss of money hurt just by itself.

It's a very good idea. A sandbox, but with limits that will allow the GM to retain some sanity.

"You’re an errand boy, sent by grocery clerks, to collect a bill."
"I love the smell of Flame Strike in the morning. It smells like... salvation"

And yes I am combining 2 characters from Apocalypse Now.

You stole my campaign! Shame! Shame on you!

But actually, it looks like you put more thought into it than I did. I needed a setting in a hurry when I made mine, so it's much less complex.

His primary role was to transport crops from the upriver settlements down to the major port on the sea. On the way he'd trade with other settlements, avoid pirates, take on passengers, avoid the logging rafts, negotiate rapids and waterfalls, save a lost ghost and keep the river spirits happy. Also remember that you have 3 dimensions to work with, one of my favourite adventures involved some otterfolk raiders using a strange mechanical device to sink boats, so we ended up having to chase them underwater as well as do some rescues ferrying passengers fromthe scuttled boats back to shore - It was a fun run our trip down those rivers
Last edited: Jul 24, 2021

The Journals of Lewis and Clark will provide you with background ideas.

The civilized area might stay downstream because of a waterfall / cataracts. Or because a climate zone change from moist forest / farmlands into desert or prairie.

3e supplement Sandstorm includes a prestige class for "Cleric/Paladin of the River Goddess" which is not-Egyptian but convertible for your campaign theme.

Something you don't see often: the Niger River (Africa) rises in tropical highlands, loops into the prairie / semidesert zone south of the Sahara, turns back through tropical lowlands, to the sea. Three different climates, beast encounter tables, and culture zones. So it feels like you are travelling to "not just like home".

MattW said:
It's a very good idea. A sandbox, but with limits that will allow the GM to retain some sanity.
Click to expand...

The more I am working on the specific for this campaign, the more I am amazed how stunningly easy it all looks.

Take generic oldschool hexcrawl procedures and sub-systems, make a chart for the main river, and it seems you're pretty much ready to go. I could never get on board with procedurally generated sandboxes, but with this premise it feels like a perfect fit. And by reducing the map from two dimensions to basically just one, it all looks so much less daunting. You don't need five directions which you have to anticipate at any time but only one, or in a few spots along the river two. And you don't need to worry about the complete map looking like a somewhat plausible natural environment. How the river winds exactly is irrelevant, as travel is always exactly along the river with no point to take shortcuts.
Feels like hexcrawling for noobs and lazy GMs who get turned off by creating a sandbox map.

I think great parts of this game can be carried by properly designed random encounter tables that include encounters with other travelers and environmental events. For creating specific settlements and ruins on short notice, I absolutely recommend Worlds Without Number. This book was made specifically for this. (Though I like the B/X clone too.) And ruin sites don't need to be particularly large or have anything amazing in them. If the player go through them in 90 minutes and leave with a few baskets of bronze scrap, it was a full success.
And the possibility to buy and equip larger ships as mobile base camps, or even establish trade posts in the wilderness should be a great way to spend all the money they are making from their hauls. Buying a few tons of tin ore from a remote family mine and getting a dangerously overloaded ship through hundreds of miles of pirate infested waters can be a great adventure in itself.

I've only been tinkering with this for three days, and I feel like all that's left to do is develop the cultures of the humans that populate the lower river and explore the upper courses.

le grand fromage said:
The Fear of a Black Dragon podcast has reviewed a few "river orientated" scenario/campaigns in its time. Death on the Reik of course but also (and especially here) Qelong & for ambiance a background Yoon-Suing...
Click to expand...


I already had Yoon-Suin on my list, which does have it's own strange great river, but Qelong is a great recommendation. Read that one years ago, and I think I could actually drop that into this campaign pretty much as is. I think the setting style is very similar to what I want to go for.

Going from theoretical structures to the practical aspects of setting up a setting, so far I've come up with this list of possible creatures to encounter on a river or lake. Of course, in addition to that, you also can have all the usual creatures when the PCs get to shore.

I think that's actually a pretty good number, to which you then also add all the kinds of people you can encounter on boats. Some of the animals would need to get a more monstrous version of them statted up, but it's a good start.

Instead of doing a River-Striding animal ride of some kind, which changes the tenor a bit, how about an upriver "Chariot" situation?

The players are still on a boat on a river, but rather than paddling upstream there's a team of Manatees or Hippocampi or something similar pulling the boat along in the river. And every night, and several times during the day, the boat must be moored and the animals freed in order to rest and eat before they start pulling again?

As an alternative to rowers, in places where sails can't be used, that's a pretty cool idea.

There’s also the Dracula scenario with some form of deadly cargo aboard and “disappearances.”

How about a giant version of the Diving Bell Spider?

This giant spider could be both useful and terrifying for those who explore the underwater ruins.

Utricularia (sp?) - a carnivorous plant that lives in shallow water. IRL, the suction-based trap can be triggered by bugs, newborn fish fry, and such that tickle a sensor hair.
Scaled-up version might grab your foot and cost you movement / a bonus action rather than sucking you in whole.

Mud bog under shallow water so it "suddenly gets deeper" and takes extra movement to get through and might even behave like quicksand with a layer of drowning on top.

Murky water conceals a drop-off. Overconfident characters in Heavy Armor will not appreciate "discovering" 7-foot depth. And an intelligent foe might do some underwater digging beforehand.

I love dragonflies. Totally gonna use those. I believe that also means mosquitoes in swampy forest and wet moors.
Fighting in soft mud also is an idea I really love. Might actually come up quite often when PCs try to make a dash for their boats to escape land monsters.
Water plants that can latch up to swimmers and whole boats are also a cool idea. Might not be a big problem by itself, but could have a big impact on some fights.

So anyway, I made a nicer map.

The main structure is from the Mississippi, scaled to half its length, with some altered branches.

Also, what if the river ever freezes over? That could provide a nice environmental obstacle, and/or provide an opportunity for iceriggers akin to Dragonlance's, as seen in the cover to DL6: Dragons of Ice: 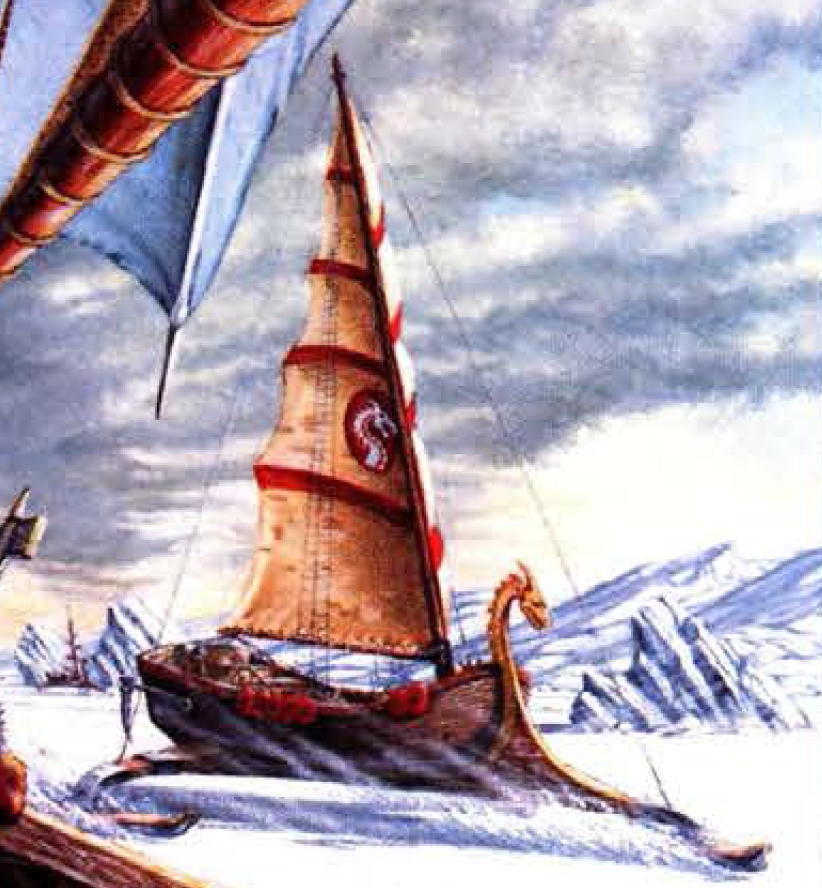 If you saunter over to the Canonfire! site, there's an entire 20 level 5e campaign set on the rivers of Greyhawk.

Cool idea.
In river based adventures I have DMed and played in, we have often ruled that trying to steer a river boat at night is too dangerous, so they always have to dock for the night. In 5E, I might also rule that you need to set up camp on the banks in order to get a Long Rest.

This allows for various combat and non-combat encounters on land and you arent always stuck on the boat which can get a bit repetitive. I did see that the OP has plans for other ways to get the PCs off the boat though.

At the end of the day, the river is a means to get to places

Hussar said:
If you saunter over to the Canonfire! site, there's an entire 20 level 5e campaign set on the rivers of Greyhawk.

That link is dead. But this one isn't.

D&D 5E A campaign that lasts an entire (in-game) lifetime... what would this look like?
2