Welcome to 2048 and one of the greatest cyberpunk cities in the near future - Shanghai. The government has infected a hundred villages with a vampire virus to create the perfect super-soldiers, but the peasants revolted and a virus that was supposed to be sterile is spreading with every neck they bite.

Unless the characters can keep the mysterious scientist Doctor Wu alive for twelve hours, Shanghai will be just the first snack on the way to vampire domination of all mankind. Shanghai Vampocalypse is the first setting book for characters who reach the new Demigod rank Suzerain introduced to Savage Worlds.

Because one vampire is a challenge, but eight million are an apocalypse... and a suitable challenge for demigods!

Product contains:
*All the knowledge you'll need to run games in Shanghai 2048.
*Many new character options including new Edges, Hindrances, and Powers.
*Rules for turbo-charging characters to play the campaign instantly, including hooks into the ancient local gods like Dragon of the Bund and Crane on Mountaintop.
*Ancient mystical magic meets cyber tech - all manner of supernatural martial arts and high tech equipment explained in detail.
*30 scenarios including a full plot-point campaign taking characters through Demigod rank all the way up to godhood! 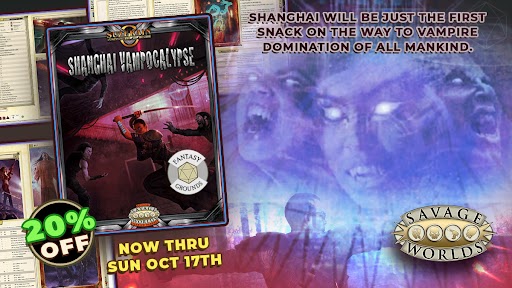