Release The Crashing Wave & A Blight in the Darkness (FG VTT)

-Pathfinder 2 RPG - Pathfinder Society Scenario #2-06: The Crashing Wave
Paizo Inc.
$5.99
A Pathfinder Society Scenario designed for levels 3-6.
On an island off the coast of Jalmeray, the Pathfinders are called to action! The Society's friends at the Monastery of Unbreaking Waves are faced with a horde of sea devils seeking to level their recently rebuilt temple beneath the waves and claim it for themselves. The Pathfinders arrive just as the invasion reaches a crescendo and must fight for their lives in pitched underwater combat if they hope to protect themselves and their allies!


-D&D Adventurers League 10-05 A Blight in the Darkness
Wizards of the Coast
$4.99
The wicked owlbear Frostclaw was nearly defeated. Now it’s time to finish the deed and destroy her and her master once and for all. But first, you must find them.
Track them down and save Ten-Towns!
Part Five of the Plague of Ancients Series of Adventures.
A Four-Hour Adventure for 5th through 10th-Level Characters 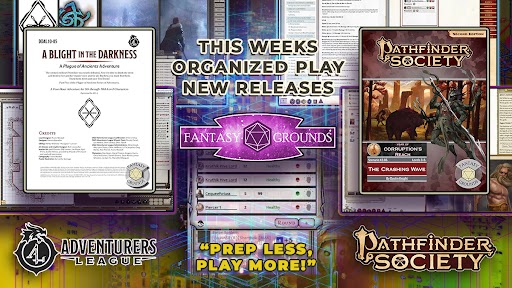