The Horned Rat: A Review

One of the great joys of the Warhammer Fantasy RPG lies in its ability to blend grim darkness with wild, fantastical creativity, and this is on full display in The Horned Rat. Over the course of its tangled adventures you and your party of hard-bitten heroes go from hunting cat-killers in the slums to foiling a rat-man's mad plan, and somehow every part of it feels perfectly fitted to the tone of the world. 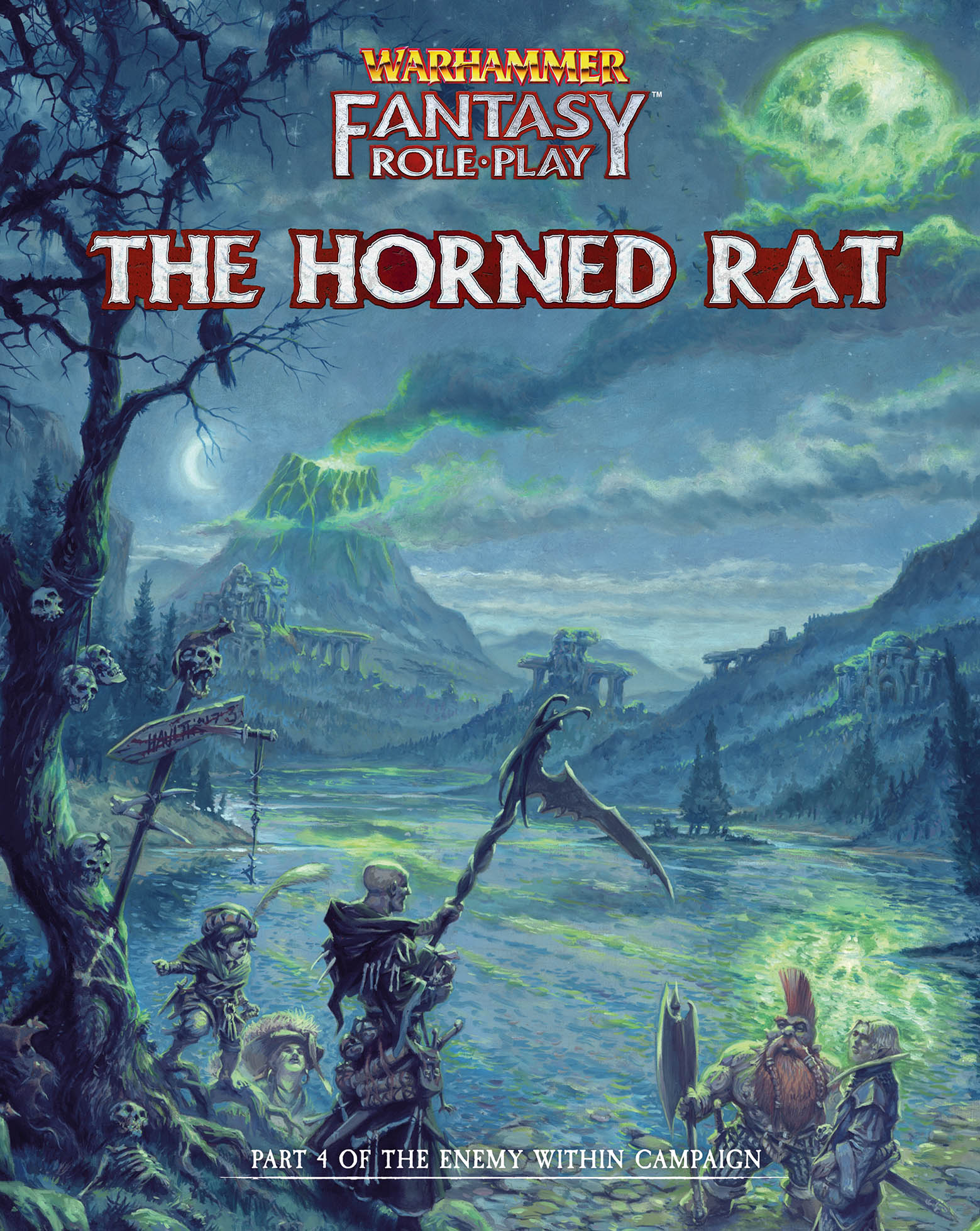 As the fourth and penultimate part of the sprawling Enemy Within mega-campaign, The Horned Rat is designed to slot into an ongoing game set in and around the city of Middenheim, and a decent chunk of its content is devoted to keeping the threads of chaos corruption and general unrest that have been neatly cultivated in previous volumes. However, though the book itself is at pains to point out that it works best when used as part four of five, you could get a lot of mileage from running it solo - albeit, with some of the long term plot threads trimmed out and the party's starting XP cranked up.

There are a handful of reasons you might do this, but chief among them has to be this volume's designated bad guys - the Skaven. These nasty blighters are a race of hideously mutated rats, and when run properly they can alternate between slapstick stupidity and creeping horror over the course of a single sentence. They don't turn up too much in the earlier parts of the book, but every time they do it's a delight. From rat-ninjas through to an undead spy-rat (complete with a gramaphone-esque hearing trumpet jammed in its back), they help to make every moment a marvellous mixture of hilarious and horrifying - exactly what you want from Warhammer's Old World.


The campaign is broken up into two roughly even halves. The first of these is a tense and treacherous investigation into what the hell's going on in Middenheim, where the party needs to not only uncover the Skaven's dastardly schemes, but accumulate evidence proving that the rat-things actually exist - apparently a matter of some debate in the Empire.

This entire section can easily be thought of as a series of interlinked, shorter adventures rather than a single monolith of plot, with Skaven schemes and imperial investigations unfolding as the days pass. It's easy to find several different strands of the adventure playing out simultaneously, and while this is gratifyingly open-ended it can be tricky to keep track of all the dangling threads unless your party is particularly single-minded.

Once this tangle of adventures is put to bed and the presence of a Skaven master-plan uncovered (or, at least, hinted at rather strongly), the second half of the campaign is much more traditional, with a roughly linear plot that culminates in a big old battle in the mountains. While this may seem a little disappointing after the freedom offered by the earlier sections, the pace is kept high enough and the action is compelling enough that most parties really aren't going to mind. If someone is genuinely opposed to tearing off into the mountains to thwart the plans of evil laser-rats, Warhammer Fantasy RPG probably wasn't the game for them in the first place.
Really, the only major sticking point in the entire thing is that, as with many of the other volumes in Enemy Within, there are a few spots where the book throws down clear limits on the players' actions. Any plans to head off to investigate the Skaven plans outside the city before the designated time, for example, are hit with a rather arbitrary "you can't go here yet" message, and the GM is instructed to send them off on a handful of scene-setting side-quests while things move behind the scenes.

Putting these complaints aside, however, The Horned Rat is a stellar bit of Warhammer Fantasy RPG campaigning. It straddles the line between grim horror and silly fantasy with impressive grace, and though there's a lot for the GM to manage it's great fun to run. The biggest issue is waiting for part five of the mega-campaign to come out...

Liane the Wayfarer said:
Last night, it occurred to me that complaining about one module in the Enemy Within campaign as being excessively railroady is a little odd, considering the whole campaign has railroady elements. That's fair, and I should reread SRiK to see if memories of a terrible in-game play experience tainted the work.
Click to expand...

I think a lot of work has been done to work on that. SRiK was excessively so and some of the worst example of this I have ever seen. A BBEG that essentially can’t be defeated and is described as unbeatable - no reason why, other than the fact that he’s awesomely powerful. Also an example of an interesting backstory which PCs will never get to find out. The whole final fight is described in one page, almost as if added as an afterthought. It was a terrible conclusion to what had been in other places an interesting adventure.

TheSword said:
Altdorf existed as a location but there has never been a source book for it. Even the Middenheim book which I didn’t add to my list is totally different to the original City of Chaos book and not a reprint.
Click to expand...

Also, apropos of nothing, the Altdorf book is fantastic. The only downside is, I feel like they had a mandate "include at least three adventure seeds for each location!" and as a result a lot of them are less useful. I think it's better to have one solid adventure seed, or maybe six or ten for a district, rather than try and manufacture seeds.

Liane the Wayfarer said:
Eeeh... I mean, to each his own. But the adventures were very railroady to me. There are things the party has to do for the plot; when we played if felt flat. It introduced a bunch of gods nobody had heard of before. The two Chaos Gods introduced were put in for a joke. The one god tries to throw a spanner in the plans of the other Chaos gods, and his holy symbol is a monkeywrench. The other is about doubting the idea of gods altogether.

What I liked a lot was the way they had little faiths followed by the peasants for minor benefits. Good for farmers and such. I liked the flavor.


I want them to update all the old material. I was jazzed they updated my favorite scenario, and then was devastated when they changed the key character from a gnome into a halfling.

The scenarios weren’t railroad’s as much as the characters were put into situations they couldn’t back out of and everything was written with a sense of irony. Like I say, I thought it was brilliant - but not your usual Warhammer fare.

Ive converted the whole of the 4e TEW to wfrp3e (if any of you need it its on the rat catchers wfrp discord).
Everybody's got their favorite editiin I guess.
Nice [FINALLY] having new adventures in the campaign.
Although I find skaven and the now-cliche 'Vermintide' tedious, I know my players don't, and that's what counts

The Final Installment of The Enemy Within is out!