D&D General The six and one disasters the: Quma-hix

when I said I was making a new dragon equivalent I meant these guys
I like basic themes from the monsters of Hellboy, a very different elemental system, my new user image(see below) quintessons and the Yelbeghen to make a rival for dragons and giants...

I will give you the Quma-hix
The six and one disasters the: quma-hix
there are seven types.
Only six types have been seen.
The five lesser and one greater.
They have seven arms and seven legs with seven heads that rotate.
With seven eyes on each face plate, they rotate to express emotion like Quintesson. 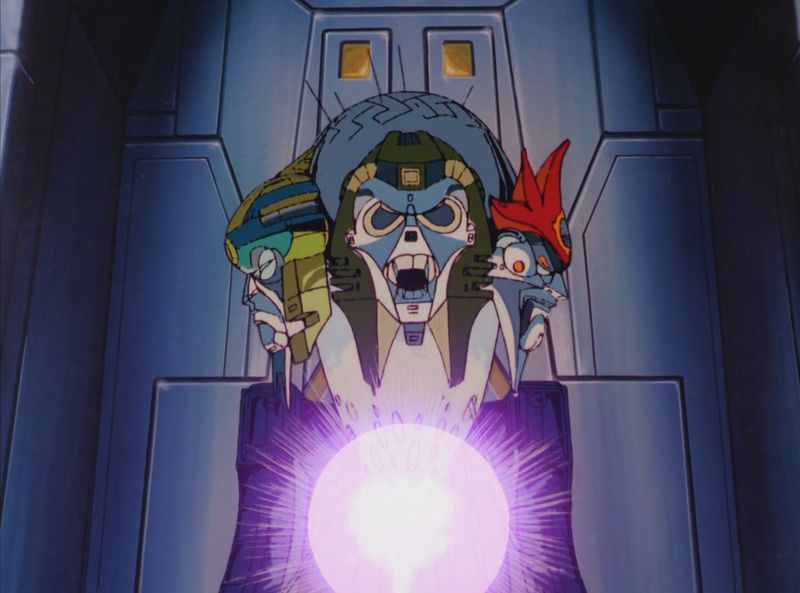 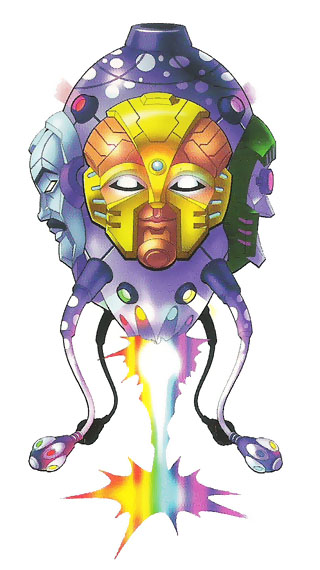 how they fight
they can always take seven turns per round they fight with a mixture of direct energy beams shot out of their eyes and aura effect both of their corresponding damage type.
they each have a corresponding weakness to a different damage type

where they lair
unlike dragons or giants, they will pick any spot in a region of a world and change it to match their taste in a matter of seven days regardless of other factors even if the rest of the environment should make this impossible like making a lake in the middle of a desert or a volcano on a world which is internally dead.
they can all fly off and can plane shift once a day.
they also make magic stuff happen this will be gone into in each type but weapons dipped in their blood gain a powerful attack of the relevant damage type.
also, all are gargantuan.

with heads resembling macaws with seven glowing yellow eyes, its arms are great feathered wings ending in a Xenicibis style bludgeon.
its whole body is feathered and done in a metallic vermilion material.
with seven crane-like legs each ending in raptor feet.
they do fire damage
they possess a tail underneath them that resembles a birds-of-paradise's aside from the fact they are always on fire.
They make lair it the shield volcanoes they force into reality these are always in a seven-mile area, everything's in a 49-mile area taste becomes more sensitive, birds of all types spawn even if non are native and fires grow stronger, hotter and are more likely to form.
they are weak to thunder damage.

with seven turtle-like heads with seven green glowing eyes, its arms resemble the coils of a snake each ending in a viper's head.
its body resembles the shell of a tortoise done in charcoal black and is always cool to the touch
they float about instead of standing and have turtle flippers instead of feet.
they make lairs in the acidic lakes they spawn these lakes are always seven miles across, everythings in a 49-mile area hearing becomes more sensitive, and shelled life will be spawned, mostly around the lake itself even if the acid would normally kill it or dissolve its shell it will be fine.
they do acid damage.
it will rain near constantly.
they are weak to poison damage.

with seven heads that resemble a nightmare cross between a giraffe and a tiger with sabre teeth with seven glowing purple eyes, its arms are the front limbs of a great bear it has a grey striped body with the stripes being light blue with the rest of it being chrome grey it is covered in fur that stands on end with a static charge.
their feet and legs are clearly from a camel.
they make lairs in the land of lode stone and magnetized metal they for into the world these magnetic lands are only seven miles across but for 49-miles the area is bathed in light, static electricity and storms with areas even further being rendered unnavigable as compasses fail to work.
Oddly your sense of smell get stronger around them for no known reason and mammals come out of the woodwork around them.
they do lighting damage
they are weak to acid.

With seven heads that resemble giant butterfly heads each with the characteristic small glowing point this time with red eyes. It arms are giant mantis arms its skin is teal-colored. Its legs are locusts and it has the wings of a dragonfly.
They force forests filled with hostile plants in a seven-mile radius and everything grows much more than normal in a 49 mile radius with sight becoming oddly better in the same area and swarms of bugs are constant in the place and everything is poisonous or venomous.
They do poison damage.
they are weak to fire.

their seven heads are oddly the mane and face of a manticore with the horn stumps of a bull.
They have oddly human arms with umber skin the legs of a lion and fourteen scorpion tails
it appears to be made of rock and is the hardest to damage of them all.
They lair in the giant mountains or deep chasm they force into reality, the rock for miles around turn yellow, super hard filed with gems and the soil becomes super fertile but sadly endless chimeric beasts are spawned into the area as well with quake being near constant.
The marmor-hix do thunder damage shaking the earth to pieces.
Touch is also oddly enhanced.
they are weak to lightning.

they are by far the toughest to fight and deal both cold and necrotic damage their eye are orange
they have squids for heads but are covered in black bone.
Its body is icy with skeleton hands with skeleton legs and feet
they lair in icy glacier they force into reality in the standard seven-mile area within the 49-mile area blizzards form and any undead in the area minds are hijacked covered in super ice and start acting as a monastic order focused on enlightenment and the area is a siren song to all undead and the area slowly kills everything that enters
The anile-hix are by far the most peaceful as they avoid areas with large populations
they are weak to radiance and logically the unknown damage type of the seventh strain.

I have not gotten an idea off what their motivations are yet.

D&D 5E Is this encounter too difficult?
2