Publisher
The first campaign for Sword Worlds Travellers is now available on PDF and for pre-order. Skandersvik is here! 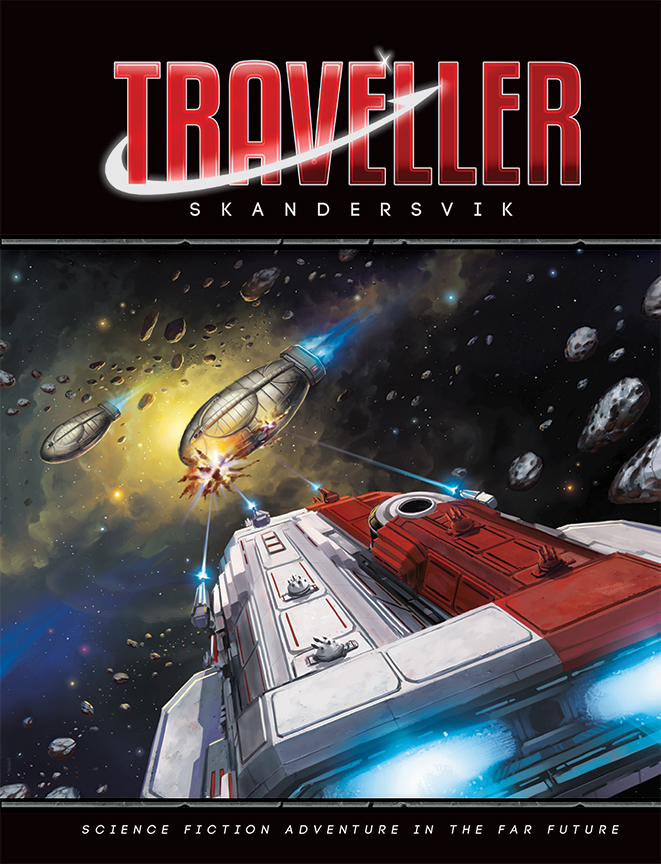 Skandersvik is a complete campaign for Sword Worlds Travellers. As crewmembers aboard the merchant cruiser Skander they will voyage through Darrian and Five Sisters subsectors, into District 268 and finally home again. There is money to be made and glory to be earned on such an expedition, but it is not without its hazards.

Freikorps Skander: An uprising in the outback of Bularia has caused what amounts to a civil war, trapping some of the Travellers’ contacts in a combat zone. Although officially prohibited from getting involved, the crew of Skander includes experienced fighters willing to join the fight as a mercenary Freikorps.

The Bowman Deception: Following rumours of a downed Sword Worlds ship on Nirton, the Travellers slip through an Imperial blockade to investigate the wreck. There, they find clues as to the fate of the legendary Admiral Denisov.

The Lunion Shield: During a transit of the Imperial systems unofficially known as the Lunion Shield Worlds, the Travellers are lured into a trap by devious pirates. Skander is a rich prize, but she may be too tough for the pirates to deal with.

Skandersvik provides a background to the mission, the ship and her crew, creating many opportunities for incidents, side trips and mishaps along the way. There is far more to this expedition than trading profits and a payday at the end. There are reputations to be made, hidden agendas to be uncovered and a tricky path to be threaded through the complex cross-border politics of the region.