“Zombicide Chronicles” (ZC) is an RPG set in the “Zombicide” universe popularised by the board game and it’s many expansions. It was released along with the 2nd Edition of the board game as part of a successful kickstarter by CMON and Guillotine Games. The Zombicide Universe isn’t your typical nightmare about zombie apocalypse, the characters are “Survivors” people that aren’t determined to win against the hordes of undead and weapons and willpower to do it. The artwork reflects this being a bright comic book style, characters shown in dramatic poses pistols and axes at the ready.
If you are familiar with the board game then there are plenty of similarities with the RPG, but you don’t need to be familiar with it to make use of this book. The RPG is designed as a standalone game, but allows you to make use of components from the board game to supplement your game.

Zombicide Chronicles keeps a lot of the simplicity of the board game in its mechanics, such as, it only uses d6, a single success is all that’s normally needed, weapons deal fixed damage that either is or isn’t enough to kill a zombie, zombies don’t roll to hit but automatically deal damage to survivors in melee range. All the classic zombie killing weapons are there, such as the baseball bat, chainsaw, sniper rifle and Molotov cocktail, and you can use the equipment cards from the board game to represent these if you want.

The book is broken into five main chapters (with several subsections).

#1 Introduction talks about the setting, Player’s and Gamemaster roles and the structure of a game. Zombicide is based on a Shelter Phase and Mission Phase, the Shelter phase consists or prep, planning and looking at the current situation, the Mission Phase is the course of action the Survivors decide on, the “adventure”. It also talks about the motto of Zombicide, “Team Up, Gear Up, Level Up and Take’em Down!” with is what the games about, finding good people, getting better equipment, improving yourself, and killing zombies.

#2 Survivors – Introduces Archetypes that all characters have to be based on, character creation, prologues (the characters backstory), and survival guide and Session Z(ero). No talk of safety tools or anything like that, Session Z is starting equipment, first shelter and planning the first mission.

#3 Playing the Game – Covers the rules, combat, gear, skills and levelling up.

#4 Running the Game – Gamemaster’s chapter, includes the Zombipedia (featuring the classics like Fatties, Abominations plus mutated zombies, animal zombies and how to customize the Dead). Also Non-player Survivors, more information on the Shelter and Mission phases.

#5 The World of Zombicide – ZC takes place in “The City”, this breaks down the districts, what Survivors might encounter there, crossing the city, threat levels and several mission seeds for each of the nine districts plus the Undercity.

The terminology takes a little getting used to if you are more familiar with other RPGs as it also reflects the board game. Skills in ZC are what you might call talents or feats in other RPGs, special abilities that have an in game effect depending on a particular situation. What might be called skills in other games are Actions in ZC, these have a rating that determines how many dice you roll when you take that action.

In ZC the actions are laid out on a grid, Attributes (Muscle, Brains and Grit) run along the top, and Proficiencies (Athletics, Attitude, Background, Combat, Perception, Survival) run down the side. You get a 1, 2 and a 3 value to assign to Attributes, and two 3’s, three 2’s and a 1 to assign to your Proficiencies. The Actions are at the intersection of your Attributes and Proficiencies, so for example Athletics and Grit gives you your “Endure” Action value, while Survival and Brains would give you your “Tinker” Action dice. So Actions range initially from 2 to 6 dice, but you can pick four of your actions to be Favored Actions, underlining them and giving you a bonus dice to roll.

Survivors also have two other statistics that need mentioning Stress and Hit Points. Hit Points as you would expect measures health, as long as you have one you’re fine, at zero you are unconscious and at risk of being zombie chow, at the start the most you will have is 5 and the least 3. Stress ranges from 6 to 10 at the start.

A simple test would involve rolling all the dice you have for an Action, and you need a single 6 to succeed. You can spend Stress to turn any dice that roll 4+ into a success. Any dice that roll a 1 however means you could have trouble occur, you still succeed if you got any successes, but if you got more 1's than successes then there is a complication of some form. It is a little more complex than that as you can get bonus dice from equipment, accurate weapons mean more dice can be turned into successes by spending Stress, and any dice you have in your pool over 6 are know as Mastery Dice and you can reroll once if they roll a 1.

The Skills I mentioned before are tied to another mechanic I’ve not encountered in other RPGs, you start with four listed on your character sheet, but one is available at the start of a mission. The others unlock through Adrenaline which is earned through successful Actions. The Skills are rated Basic, Advanced, Master and Ultimate, as your Adrenaline increases you unlock strong Skills. When you return to your Shelter at the end of a mission and have time to relax, your Adrenaline resets to zero, and you are back to the having access to that single Basic Skill at the start of the next mission.

You can also gain Experience from missions, these allow for improving Proficiencies, Attributes gaining more Favored Actions, and learning new Skills. These improvements are always with you, but the new Skills can still only be unlocked through Adrenaline.

One thing I’m a little disappointed with is characters have to be based on an Archetype (there are 12 in this book) these set your Favored Proficiency, and Attribute (the ones that start at 3) and four starting skills. This wasn’t the case in the book on release, but the FAQ/Errata came out almost immediately to make this the case. I suspect some combinations are just a little unbalanced. Hopefully we will see some more archetypes in future. I’m sure most Gamemaster will flexible if you want to make some modifications.

Combat assumes there are a number of Opening Shots, then you end up in melee range. Combat occurs when the Survivors are cornered or determined to make a stand. Even if you “Disengage” you only move away to Range 1, until the end of the round (see Errata) and then you are back in the thick of it. You won’t be rolling for combat if you can keep your distance taking pot shots at zombies, so it doesn’t bother to simulate that.

In combat you can do 2 Actions, (not to be confused with the Actions I mentioned earlier), 1 Main and 1 Support, and Attack is always considered a Main Action. The other things you can do in combat are called Moves not sure why they didn’t just say you can do two Moves in combat to avoid confusion (because we used Actions for skills, and Skills for talents).

Once the Survivors have acted the zombies get to act (assuming there are any left), the GM totals the Strength for surviving zombies and the players assign these attacks among themselves. You can save an Action to Evade or give up an action from the next round. Any successes during the Evade roll, cancel an attack on your Survivor, any uncancelled attacks do one damage.

The book is laid out well, chapters are clear on what they are about, the Index is really useful. There is lots of support and inspiration in the final two chapters. The rulebook was released along with a supplement called “Stories from the Outbreak” which like the final chapter has missions for each district of the City, but these are more fleshed out. What I liked about this is it references particular rule with page numbers as they come up, great for someone new to the game.

The Shelter/Mission Phase structure is a nice feature that I think will work well with the Adrenaline mechanic to set pacing. The city districts and different types of missions give a lot of structure when it comes to designing encounters for your Survivors. There is a surprising amount of content for a book that is just over 170 pages and packed full of artwork.

A little disappointing is there is already an errata for the rulebook which makes some pretty significant changes, like the requirement to use archetypes, and removing the limit on bonus dice Survivor can get from equipment and circumstances and the disengage only lasting that round.

Also because of how combat works there really isn’t a need for miniatures or the map boards from the board game, and I’m not sure how you would integrate them if you wanted to. A bit of guidance on this would have been nice but then would it really be a standalone product? Another minor issue is the book talks about Zombie Heads and Molotov's on the dice, instead of 1's and 6's. Which would have been fine as the original Zombicide used dice marked as such, the 2nd Edition doesn't however it just uses standard dice, you have to buy the special dice separately. No where in the rules does it actually mention that a Zombie Head is effective a 1 and the Molotov a 6, so if you weren't familiar with the original boardgame, you might not clue what it means. 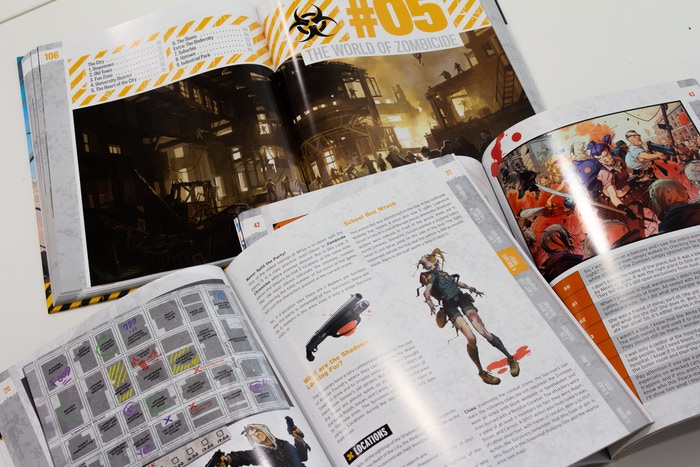 Very happy I backed the RPG kickstarter. The book is beautifully presented, the rules a clear and straight forward. I like how it reflects the board games mechanics but isn’t dependent on it. It introduces a solid campaign structure based around a shared Shelter the Survivors return to after doing Mission together. The core book has loads of mission the players can do around The City, and the mission supplement Stories of the Outbreak adds a lot more. The Adrenaline mechanic is something new to RPGs allowing immediate rewards for the characters every session, and Stress allows players to choose when they succeed and look badass.

Currently there are four products available to kickstarter backers, while I've only seen the core rulebook in the shops the others are "coming soon".

Advice on a game mechanic

(+)Changing From a DC Ladder to a Success Ladder
2