A Review of Doctors And Daleks 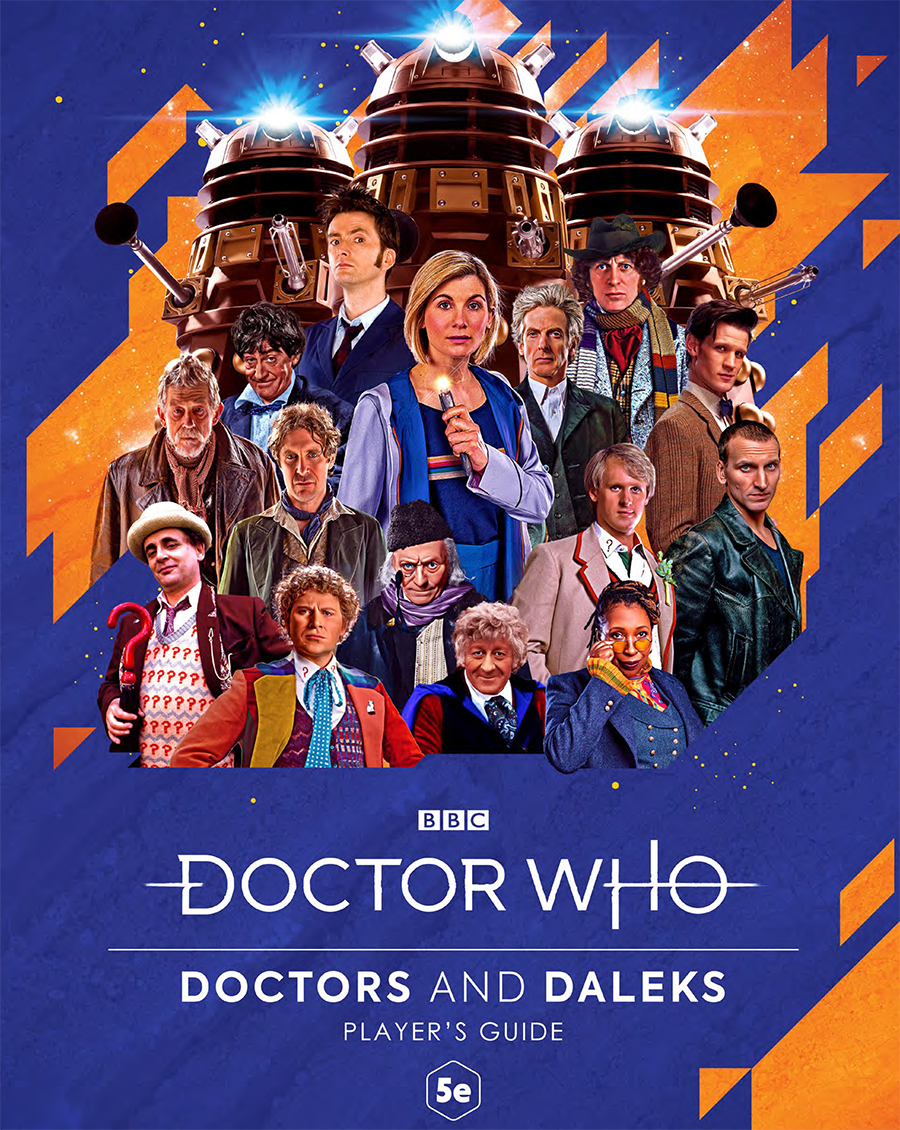 When Cubicle 7 announced a Doctor Who RPG book that used Dungeons & Dragons Fifth Edition as its basis, there was a great hue and cry on social media. Eventually two basic camps emerged; one that thought that 5e was a terrible fit for Doctor Who stories and one that thought if anyone could make it work it would be the folks behind Adventures In Middle Earth. I have looked over the review copy of the first book Doctors and Daleks Player’s Guide sent by Cubicle 7 for review. Did they pull off a miracle or should this book go back to a trunk in the TARDIS? Let’s play to find out.

Lead writers Walt Ciechanowski and Zak Dale-Clutterbuck use the basic structure of 5e and recast it as a narrative engine. A lot of the basic building blocks are there. Characters are built via classes, backgrounds and species. Players roll a d20 plus modifiers when they have to achieve success on something that they might fail. The changes are most obvious when the game starts talking about combat, or, perhaps more correctly for this design, as conflict. Hit points become Plot Points and the game discusses how when someone runs out of Plot Points they are knocked out of a conflict. That doesn't necessarily mean unconscious; it can also mean being trapped in an energy field or standing on the sidelines in a huff because their feelings were hurt. This change is the first of many that fits the property given that the Doctor rarely gets what they want through violence.

This idea is central to the Vortex edition that C7 published. Other pieces carry over as well, such as initiative being sorted by what a character does rather than a roll added to a Dexterity bonus. Characters who talk go first, then characters who act, finally characters who attack roll. The game addresses the talky nature of the show by giving everyone access to cantrip-like abilities called quips. These abilities cause plot point damage and are reflected as types of arguments and dialogue the characters use to get their way. A Charmer, for example, might engage in a Draining Debate to get a Dalek to back off. Spells are similarly repurposed, with the “caster” classes getting access to once per long rest quips like a Discouraging Comment which not only inflicts damage but also gives the target disadvantage on ability score rolls based on which one was targeted by the player. I can already hear the people who heavily weight performance in RPGs gritting their teeth. As a social combat mechanic, it’s fairly straight forward. It’s doesn't expect players to be incisive debaters any more than D&D expects players to actually be able to fight with swords and individual groups can dial the actual roleplay to their preferences.

Gadgets are handled in a manner similar to magic items, but what surprised me were how the tech levels worked. These are usually just a bland index that exists in the background but here they affect a character's performance often. Characters using a tool outside their tech level use it with disadvantage unless there’s a narrative justification for familiarity. It’s a neat assumption that low tech levels can be hard to handle just like high tech levels. The modern professor of history might be able to convince their GM they can fire a flintlock because they wrote a paper on the Golden Age of Piracy. This also encouraged groups to follow the footprint of the show and include companions from all across time and space.

Time travel is a fairly large subject to cover in a single volume. Doctors & Daleks leaves the specifics of why groups are time traveling to a discussion in session zero. The assumption is that tables will model the show with a Doctor PC and their companions. Outside of specialized gadgets, time travel is used to assume players can get whatever stuff they need, either because it’s lying around the time machine somewhere or they can blink and grab it off-screen. The time travel rules are an excellent model for the concept of failing forward. It’s broken down into three steps: plotting the course, flying through the vortex of time and then sticking the landing. The players will get to where they want to go, but failures on these rolls add bigger complications to their ultimate destination. It can mean the difference between “ancient Rome” and “Vesuvius a few hours before the eruption”.

The book is framed as a player’s guide but it does include a GM section with some iconic baddies to face. A second volume full of more called the Alien Archive is due out soon. Antagonists are another place where the designers make some interesting choices. Rather than worrying about CR and game balance, encounters are designed from a pool of Plot Points that can be assigned to opposition based on the needs of the plot. Is their petty bureaucrat a bigger threat than the Cybermen stalking the streets of Cardiff? Give them the most Plot Points and the cyberman a few for the occasional quick ambush.

It’s these tweaks to the basic ideas of 5e that are the most noteworthy part of Doctors & Daleks. There is already an excellent Doctor Who RPG published by Cubicle 7, but they’ve put a lot of thought into porting over ideas from narrative RPGs into a D&D framework. It seems like some of this could be ported back to a regular D&D game or that it could be a way to get players who are unwilling to try other games a chance to see what a narrative game can look like while still using a familiar framework.
Last edited: Sep 23, 2022
Click to expand...

EzekielRaiden said:
In the original run (Doctors 1-7), you also had at least the Mad Monk, the Rani, Romana, and (arguably) the War Lord, and apocryphally Iris Wildthyme is a Time Lady as well, and the unfinished Shada episode includes references to a nigh-legendary Time Lord criminal (and hero of the Doctor), Salyavin, living under the assumed identity of Professor Urban Chronotis. The new series also mentions the Corsair, though they're dead by the show's present day.

So if the game plays fast and loose with the Great Time War (and who could blame them, it's a frustrating and at this point rather dull metaplot), then yes, there are plenty of renegade Time Lords floating around and some of them are even heroic like the Doctor.

Richards said:
There's also K’anpo Rimpoche from the Third Doctor episode "Planet of the Spiders," one of the Doctor's former mentors living in self-imposed retirement as an abbot in a monastery on Earth.


In order of appearance:
The Renegades: The Meddling Monk, The War Lord*, The Master, K'anpo Rimpoche, Drax, Romana II, Salyavin/Prof. Chronotis, The Rani

The non-Renegades: The Timelord from "Terror of the Autons" that warns the Doctor of the Master's arrival, Romana I**

* The War Lord is a Renegade TL. In the episodes towards the end of "The War Games," there is a LOT of talk betwixt him and the Doctor referring to "our people." Apocrypha lore has him being an early regeneration of the Master, but this is not canon in the series, just in the FASA DW game.
** The first Romana was assigned to the Doctor by the White Guardian at the beginning of the 'Key to Time' season. Upon regeneration, she chose to ignore the summons to return to Gallifrey, and thus Romana II is a renegade, whereas Romana I isn't.

overgeeked said:
Probably fairly hard considering most are still working actors either on screen or for Big Finish.
Click to expand...

Plenty of working actors out there doing actual plays.

Not that many. There's probably a million working actors out there; how many of them are on actual plays?

Morrus said:
Not that many. There's probably a million working actors out there; how many of them are on actual plays?
Click to expand...

The Screen Actors Guild says that fewer than one in 100 members (and you have to actually have had a speaking part in a TV show or movie to even get a SAG card) work for money in any given year.

I suspect quite a few pros would be happy to take a modest paycheck to do a one shot on YouTube. I'm not sure who'd front the cost, though, since I'm sure Cubicle 7 doesn't have money to get even Sarah Jane Chronicles actors to do it, and the BBC would rather just promote the final special of the current series and the upcoming series after that.

Whizbang Dustyboots said:
I'm not sure who'd front the cost, though, since I'm sure Cubicle 7 doesn't have money to get even Sarah Jane Chronicles actors to do it, and the BBC would rather just promote the final special of the current series and the upcoming series after that.
Click to expand...

And those actors haven't been sitting around doing nothing since SJA ended. Anjli Mohindra, for example, has been all over TV recently -- Vigil, The Suspect, Lazaurus Project, just in the last year. I'm not sure what "even Sarah Jane Chronices actors" means, but it sounds slightly dismissive?

overgeeked said:
I admit to being incredibly skeptical that anyone would be able to make Doctor Who and D&D work at all. But I was wrong. Cubicle 7 absolutely knocked it out of the park with this one. I don't like every aspect of this design, but they did a brilliant job adapting D&D to Doctor Who. They abandoned the idea of balance from the start, which they had to do considering the Doctor and a companion is the normal set up for the show. My absolute favorite parts of this are environmental actions and the encounter design. Utterly brilliant way to handle encounters in Doctor Who D&D. As soon as I saw that I immediately ported that to my D&D games. It's chef's kiss perfect.
Click to expand...


I stand by what I said several times before. This is the same company that made LotR work in 5e - and won an award for it -- they should have be given much bigger "benefit of the doubt" by the general crowd.

That being said, some people are not going to agree with C7's solution and that's all right.