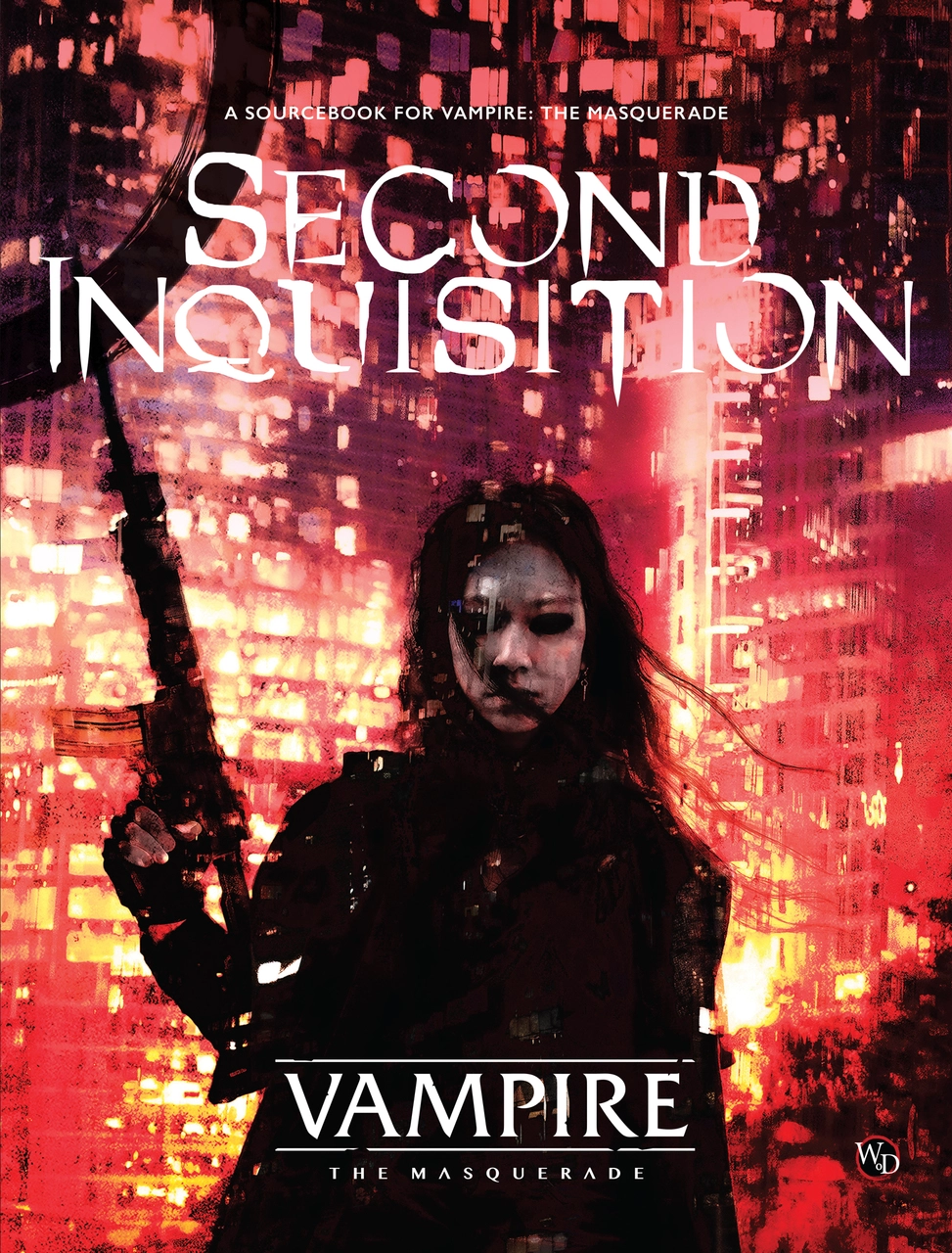 Vampires and vampire hunters go together like peanut butter and chocolate. What is Dracula without Van Helsing? Blade without Deacon Frost? One of the most warmly remembered books from the early days of Vampire: The Masquerade was The Hunters Hunted which did a lot of great work in showing fans how regular people survived the World of Darkness and how an elite few fought back. While ad hoc monster hunting crews look to be the focus of the upcoming new Hunter: The Reckoning edition, the Fifth Edition Vampire line brings hunters into the fray with Second Inquisition, a second antagonist book for a new human faction within the new world of the Kindred. Renegade Game Studios sent me a recently declassified review copy of Second Inquisition. Are they a force to be reckoned with? Let’s play to find out.

Second Inquisition is the terminology Kindred use to discuss a (mostly) united front of vampire hunters from around the world. The organization refers to itself as The Coalition or The Five Torches. This allegiance sprung up from the heightened surveillance created by the aftermath of the War on Terror. All those black bag projects and anti-terrorist initiatives turned up evidence that vampires were real and had infiltrated human society to some extent. Two major breakthroughs put the organization on the map for most Kindred. The hunters cracked into SchrekNet, the Nosferatu computer network full of vampire identities, occult secrets and other dirty deeds. Then the hunters played a part in a daring raid on the vampires of London that, as far as they could tell, eliminated the undead influence of the city.

The first thing that makes this book stand out from Sabbat: The Black Hand, the other recent antagonist book for Vampire: The Masquerade Fifth Edition, is how much it connects to previously established history. Sabbat felt a little hamstrung by having to spend a lot of time resetting the table. Second Inquisition connects to both old World of Darkness lore and newer events. The Society of Leopold, the heir to the original Inquisition that hunted monsters in the classic World of Darkness, is one of the members of the Coalition. The events of the London raid are played out in Fall of London, a campaign for the current edition set ten years ago. The book has a lot of small but satisfying connections to established lore including what the Arcanum is up to these days.

Another influence on the book seems to be Night’s Black Agents, the classic Gumshoe RPG of Jason Bourne style superspies hunting cinematic vampires throughout Europe. That’s not very surprising given that Ken Hite was the creator of that game and is one of the credited authors here along with Cat Evans and Khaldoun Khelil. There’s a chapter devoted to the toys that vampire hunters can use from grungy gear like dental pliers to high-end vampire killing Xtech that wouldn't look out of place in the Blade reboot. There’s a supernatural section as well, featuring weird relics from the vaults of the Vatican and even some Russian psychic supersoldiers. For those STs who might want to add a little James Bond flair to their chronicle, a sidebar provides some suggestions on Second Inquisition superweapons that could threaten to wipe out an entire city’s vampire population.

The book also highlights several antagonists and vampire hunting plans that the Coalition employs. There are, of course, the hardened doorkickers and old priest/young priest duos one might expect, but there are also some more novel allies that offer interesting story ideas. The Lordless, for example, are ex-ghouls who might work as double agents in a new city and identify Kindred that might flip on their elders. There are broad archetypes of how hunters work that often include specific techniques. The Detective, for example, observes a Kindred and slowly peels apart the Masquerade by noting all the small mistakes that a vampire makes every night. The subvariant the Hammer, meanwhile, leans on the vampire's mortal connections like ghouls, contacts and Touchstones to give up the goods.

The hunting plans follow a similar path. There are systems included for tailing vampires and using forensic accounting to figure out the location of the local feeding grounds by tracking how often the subject spends money at The Crimson Rose. The most novel of these is a discussion on gentrification. If a vampire thrives on hunting grounds full of people who will never be missed, what happens when rents start going up and local press starts highlighting those grounds as a cool neighborhood?

This element is something that Second Inquisition shares with its sister antagonist book. Though most of these systems are framed as Storyteller only, they seem like the type of things that Kindred would use on each other just as much as the members of the Coalition. There’s discussion on mission scope and just how big the presence of the Five Torches might be in a specific city, but even cities where the SI might not yet be will find the discussion of these anti-vampire moves, and how to counter them, useful.

Second Inquisition also, interestingly, posits the organization as antagonists to the cells of Hunter: The Reckoning. Those sorts of hunters are dismissed as amateurs or as a farm team at best, maybe worthy of recruitment should any survive an encounter or two with real monsters. At worst, the Five Torches use hunters as catspaws and canaries to mess up nests of vampires before SI comes in to clean up the rest. Yet, there’s something glamorous about the idea of having unlimited resources and slick gadgets as a crew of hunters. Much like Sabbat inspired a lot of player side content to come out on Storyteller’s Vault, I expect to see some Hunter/Second Inquisition crossover when that game releases later this year.

Second Inquisition offers an overall improvement to the Vampire Fifth Edition line. It has a better connection to previous storylines, a bevy of antagonists ready to drop into a chronicle and useful systems for waging war on the Kindred.
Click to expand...

I thought The Second Inquisition was a pretty strong supplement in all, and provides a number of worthy antagonists that could scare PC vampires. Actually, you’d better not show it to the players, as they’d probably want to play them.

I stopped by my local gamestore and bought it following this review! It's been a good reading so far.

While being on the topic of VTM, are they reprinting Cults of the Blood Gods? I've seen it for pre-order on Renegade Studios website, but I remember it already releasing last year. Was it a Onyx Path product?

TheAlkaizer said:
I stopped by my local gamestore and bought it following this review! It's been a good reading so far.

While being on the topic of VTM, are they reprinting Cults of the Blood Gods? I've seen it for pre-order on Renegade Studios website, but I remember it already releasing last year. Was it a Onyx Path product?


Yes. RGS is planning on rereleasing Chicago By Night, Fall of London and Cults of the Blood Gods to game stores, plus non-POD releases of a handful of other OP V5 books.

robowieland said:
Yes. RGS is planning on rereleasing Chicago By Night, Fall of London and Cults of the Blood Gods to game stores, plus non-POD releases of a handful of other OP V5 books.
Click to expand...

Do we know if they'll be mostly exactly the same in term of content of they'll be significant changes?