Kickstarter coming soon for dice-rolling aid​
Coming soon to Kickstarter is the Battle Box Dice Roller, the biggest improvement to dice-rolling at the table since the invention of the dice tower. Most tabletop RPGs require rolling multiple dice for attacks, modifiers, damage, and bonus damage sources. The Battle Box lets players roll them all at once for each attack, potentially saving 15 seconds or more per player per turn. It also provides a convenient place to note dice-roll modifiers, reducing the amount of time spent cross-referencing or double-checking character sheets. Over the course of a single combat-heavy game session, that can add up to nearly half an hour.

Designed by a D&D player for D&D and other tabletop RPG players, the Battle Box is a transparent plastic box with 5 compartments to roll dice in, and a slot on the lid where a ½” (~12.7 mm) high strip of paper with labels can be inserted. No special materials are needed. A strip cut off the edge of a standard sheet of paper and labeled by hand will work, making updates for use with multiple characters and changes over time a snap. The paper is held in a slot by a pair of tabs that go over it, plus small nubs at each end to keep it from sliding out of place easily.

A typical D&D player might label the box as such:

This rolls all dice for an attack at one time, separated by type and labeled by the player for easy accounting when dealing with enemies with resistances or vulnerabilities to specific damage types. The label also removes the need to cross-reference to a character sheet to determine what needs to be added to the to-hit or damage rolls. 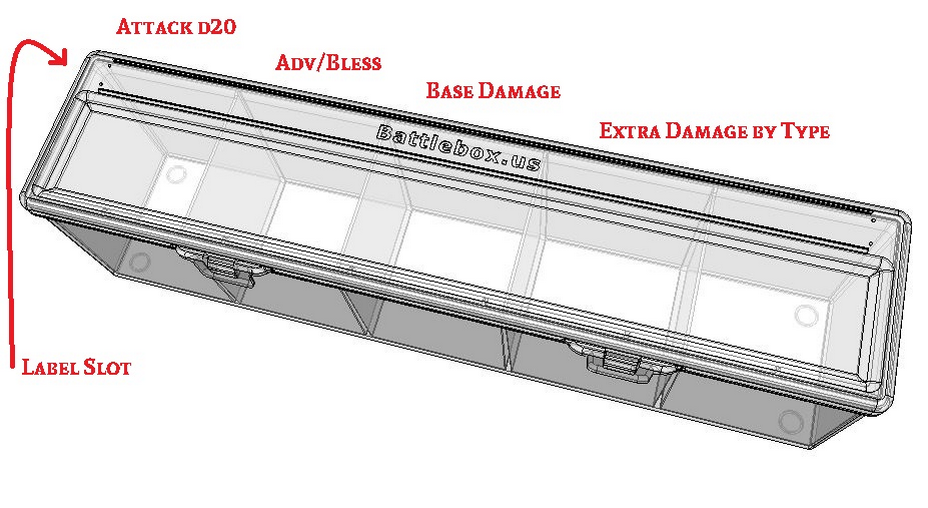 Players in non-D&D systems can label this however they want for easy use when rolling 2d10 to as a d100, or whatever other dice combinations are needed. The individual compartments easily accommodate up to 4 dice each.

"I have a lot of fun running my Dungeons & Dragons games, especially higher-level games where there's a lot going on and a lot of attacks being thrown around. I typically have larger party of five to six players. I noticed that it would usually take time for people to pick out and roll the appropriate dice to attack, then cross-reference to their character sheet, then roll again for damage and cross-reference again to see what to add.

Even for someone who rolls all of their dice at once, separating out three or four different types of results, like attack versus regular damage versus damage from being a holy weapon versus the weapon also being on fire takes time. I tried to figure out how to make things more efficient, so we could spend more time playing and less time waiting on dice-rolling and math, and this was the result. It's a simple concept, but I couldn't find anything like it on the market."

Design work for the Battle Box is complete, and a US-based manufacturer has been selected. The Kickstarter is expected to launch in June 2021. The pre-launch page can be followed at: https://www.kickstarter.com/projects/battlebox/battle-box-a-dice-rolling-aid

FROM EGG EMBRY: Jonathan Hightower, the designer of this project, shared this press release with me. His idea, a box to hold and roll all of your character's situation-appropriate dice at the same time struck me as a welcome innovation. While I have nothing to do with Jonathan's project beyond being a fan, I wanted to share this press release to make gamers aware of his upcoming Kickstarter.

For Honor and For Glory! An Epic Fantasy Roleplaying System