One of my frustrations is that I never seem to be able to get a group together to play. There is always someone who can't make a certain date or time and then inevitably, someone doesn't show up. Well having played the free example adventure of Beowulf: Age of Heroes, I think I have found one solution. This game is currently on Kickstarter, but like I said, the free adventure The Hermit's Sanctuary has been available for several months now. It is a reworking of the 5e rules intended to be played with a GM and 1 player. They do this by giving the PC access to followers that can be spent to add bonuses to help out the Hero and make up for weaker skills that the player's Hero might have. In our session, it really worked well. There are several other interesting additions that make this game really unique. There is a voyage at the beginning of each adventure. Dice roles are used to generate Portents that can be called upon to gain inspiration, and like I said earlier, there are followers. The player starts with a group of followers and can enlist important PC's as followers throughout the adventure.

The setting is the a mythical middle age Europe in what the authors refer to as the Migration period. This game does not have spell casters or really any significant magic. In each scenario, there is a monster which need a hero to eliminate. Each monster is a formidable for and has an Undetectable trait that can only be removed as the player uncovers clues to the monsters weakness and how to defeat it. Only once the prerequisites are discovered and put in place is it possible for the monster to be defeated. This is modeled, as the name suggests, after the epic poem Beowulf in which the Hero, Beowul, travels to Denmark to aid King Hrothgar in defeating Grendel and then Grendel's mother. But in the game, the Hero can take on any size, race or background. They released 8 pregenerated heroes with the free adventure and the great thing is that every Hero has a different skillset to use in confronting the monster. Playing through the adventure multiple times can lead to entirely different outcomes adding replayability to every adventure.

The game is being produced by Handiwork Games, a company started by Jon Hodgson, who is a prolific artist for many RPGs, probably most famous for his work on The One Ring and Adventures in Middle Earth (the 5e adaptation of The One Ring). He has produced a great game (in my opinion) with the help of Jacob Rodgers who helped with the conversion to the 5e system. The artwork looks incredible.

The Kickstarter for Beowulf launched this week. There are lots of extras available, from coins, dice trays and even custom miniatures. I have been waiting for this for a while and am really excited that it was funded on the first day. I would encourage anyone who is interested to check it out. 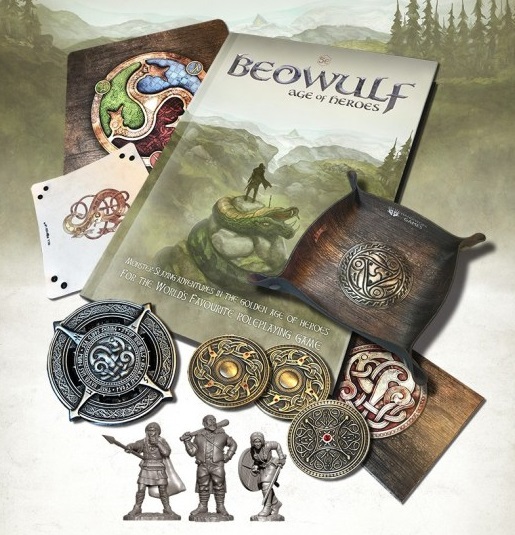