Blue Planet is back with a new edition. Crowdfunding via Kickstarter, this book is coming from Jeff Barber of Biohazard Games and Alan Bahr of Gallant Knight Games. Jeff and Alan agreed to answer my questions about the game and why they combined forces to put this out. 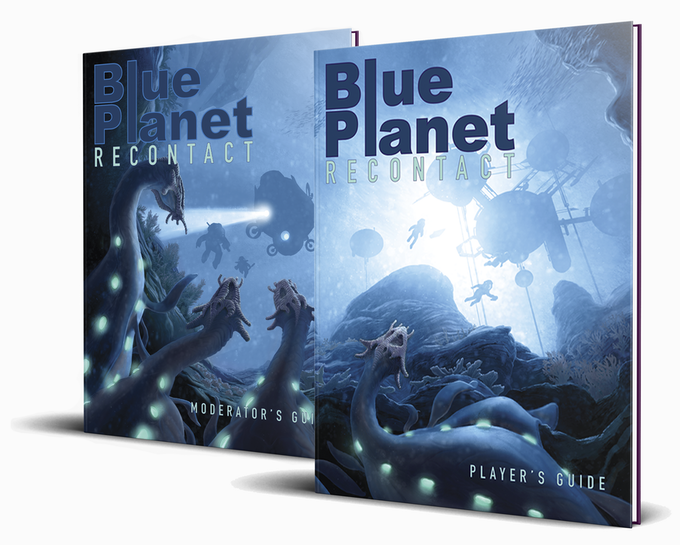 EGG EMBRY (EGG): Jeff, you are a busy sort with a number of projects going. You’ve got a new one with a partner company that you’re kickstarting, what can you share about it?
JEFF BARBER (JEFF)
: Alan [Bahr] and I came together while working with Nocturnal Media on Biohazard’s last RPG, Upwind. Blue Planet is sort of a well-known classic that has been out of print for 20 years and with its environmental themes and ocean focus it seemed like a meaningful time to reintroduce the game. Two volumes, 3rd edition, new mechanics, full-color, all new art, new campaign hooks, setting and tech updates, new setting content, sensitivity readers. Same deep world-building and realistic sociopolitical situations.
ALAN BAHR: (ALAN): Like Jeff [Barber] said, we met working to finish Upwind, a Biohazard plus Nocturnal Media project. I was a longtime Blue Planet fan and so it was a natural conversation! To me, Blue Planet is one of the defining science fiction roleplaying games, up there with Traveller in the RPG history books! I was thrilled to be able to talk to Jeff about it and discuss the chance to continue it’s storied legacy.

EGG: For those that don’t know Blue Planet, what’s the world like?
JEFF: Blue Planet is set on the waterworld of Poseidon (97% ocean-covered) discovered on the other side of a traversable wormhole. It’s Earth’s first extra-solar colony and the first, genetically engineered colonists were abandoned 100+ years ago when an agricultural blight on Earth caused global famine and a crisis of resources. Earth reestablished contact 30+ years ago and found the 5k colonists had become 80k natives. They also discovered xenosilicate or Longjohn, a valuable ore that allows for perfect genetic engineering and therefore the prevention of aging. The default stories take place in the midst of a major “gold rush” as incorporate city states, national factions, the natives and other power blocks vie for the future of the planet. The game is “hard-sci-fi” and carefully researched. My background as a field biologist and a marine science teacher was poured into this book. The planet has a strangely rich, elaborate and deadly ecology that shares its base DNA with terrestrial life, and there is a little known, apparently indigenous sapient species that also has a stake in the future. Though the original Blue Planet predates many of these titles, the setting is evoked by the movies Avatar, Blade Runner, and Outland, the television series The Expanse, Firefly, and Earth II and the books Legacy of Heorot, Songs of Distant Earth, and the Mars Trilogy. A reviewer once gave a glib but accurate elevator pitch for Blue Planet as "Space marshal Cowboy and his cybernetic dolphin sidekick fight eco-crimes in alien Hawaii."

EGG: Why is this called “Recontact”?
JEFF: Recontact is the in-game term for the fateful day in 2165 when the UNSS Admiral Robert Perry entered orbit around Poseidon, “reestablishing contact” with Earth 69 years after the original colonists were abandoned. Given that more than two decades have passed since the publication of the first edition of Blue Planet: Recontact seemed a fitting subtitle for this new version of the game. 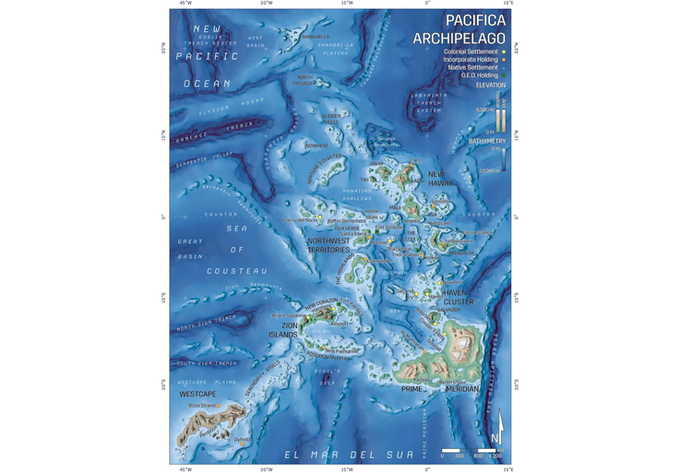 EGG: Reading the promotional materials, the new edition is staying true to the original timeline and themes. What can you can share about those themes?
JEFF: Blue Planet features environmental themes by presenting a precarious future threatened by the dire consequences of ecological collapse. Issues like biodiversity loss, ocean acidification and climate change were only obscure concerns within the scientific community 25 years ago, but now pose existential threats. This new edition will let us make our own small appeal for better stewardship of our original blue planet. The game is also staunchly anti-colonial in the depiction of the conflict between the original colonists and the Newcomers. This allows players who are interested in doing so to explore the critical effects of colonialism, possibly gaining insight, sensitivity or even empathy regarding the issue.

EGG: What inspired you to partner for a new edition of Blue Planet?
JEFF: Alan is a hardworking, creative game-making force of nature. He was also a super standup guy when Stewart Wieck passed away in the midst of the Upwind project, and was critical in helping see that game through to completion. I would not be doing this new version of BP without him.
ALAN: I mean, it’s a great game, a great world, and Jeff is one of the best creatives I’ve worked with in the industry. Teaming up with Biohazard was a no brainer in my books and I’m just grateful he trusted me enough to let me help in bringing this edition to life.

EGG: Who is working on this project?
JEFF: Mostly it’s me and Alan. There are some guest writers, and a few folks who have worked on past versions of the game and the setting, like by first partner Greg Benage, and authors like Jason Werner and Rich Howard. The guest authors include Elizabeth Chaipraditkul, Graeme Barber, and Mari Murdock.
ALAN: Stephane Shoz and Jeff Zugale are handling art duties (Jeff did the cover and Stephane is doing the interiors.) Mark Richardson is doing the maps and Thomas Deeny is handling and working with us on layout! Mark did the maps previewed on the Kickstarter page and in the Quickstart, and we’ve included several stretch goals to do more maps! Thomas did the excellent quickstart layout work so you can see the high quality he brings to the team there!

EGG: Mechanically, what can you share about the Synergy rules system?
JEFF: Anyone familiar with Blue Planet v2’s Synergy rules will recognize the new system as a modern evolution of those mechanics, sharing a little of that design's genetics and the same intent to support the hard science realism of the setting. Players will also find the new system is simultaneously simpler and more robust, while supporting richer, more evocative character creation that's focused as much on who characters are as what characters can do. Characters have 4 attributes with optional foci and up to 8 skill sets – areas of expertise based on player-generated descriptors that evoke a character’s origins, training, occupation and experiences. The core mechanic is roll ≤ (attribute rank)+(skill set rank). The roll is made with either 1, 2 or 3 d10, depending upon whether the general, core or specialty in a given skill set is being used. For those who know v2, these elements should seem familiar. There are fewer attributes, but they work similarly, and the variable dice pool is a streamlined take on the aptitude mechanic. The skill sets are simultaneously simpler and more robust than the long list of specific aptitudes and skills in the 2nd edition. Blue Planet does remain a realistically dangerous game, keeping the wound levels and trauma tests from the 2nd edition. Weapons and sea monsters are therefore quite deadly, so characters should try to avoid getting shot. Or eaten. The new mechanics also lean in to the qualitative roleplaying aspects of modern character design, providing Tags, Tracks and Ties unique to each player's character concept and each moderator's campaign. The emphasis is as much on who a character is as what they can do. 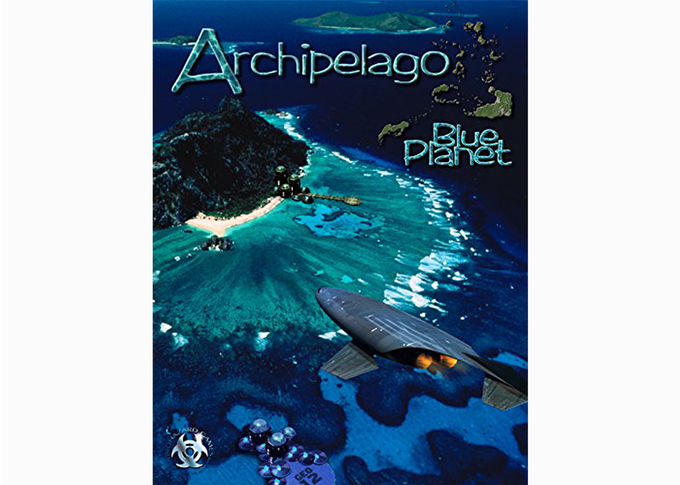 EGG: For fans that are interested in learning more, you have a quickstart, correct? What does it offer?
JEFF: There is a free, 80+ page, full color primer that contains the new version of the rules, a setting sampler and a demo scenario called "Trouble in Paradise," complete with ready-to-play characters.

EGG: I know you have a number of projects going. Beyond Blue Planet: Recontact, what else can you share?
JEFF: You’ll have to ask Alan directly. I’ve got my hands full with BP so this is all I’m working on.
ALAN: Oh wow. We’ve got more TinyD6! We just wrapped a new expansion for the award-winning and best-selling Tiny Supers, and we’ve got more announcements coming down the line! I don’t want to spoil things and right now Blue Planet is the big focus for the GKG team, as we support Jeff and Biohazard to the fullest extent of our capabilities.

EGG: Thanks for taking the time to answer my questions. You can find the campaign here, Jeff is on Twitter and his website, and Alan is on Twitter.
Egg Embry participates in the OneBookShelf Affiliate Program and is an Amazon Associate. These programs provide advertising fees by linking to DriveThruRPG and Amazon.
Click to expand...

Egg Embry is part of EN World's Columnist (ENWC) program as well as a columnist for Knights of the Dinner Table, d20 Radio, High Level Games, the Open Gaming Network, the Tessera Guild, and GAMA's magazine, Around the Table. His area of focus is tabletop RPG crowdfunding campaigns. In addition, he blogs about Ghostfire Gaming's Grim Hollow setting. His RPGs can be found through Egg Embry Publishing at DriveThruRPG (PDF) and Itch (PDF/Print).
If you enjoy the articles on EN World, please consider backing the EN World Patreon. Every dollar helps to make these articles possible.
M

Longtime fan since the first edition, this is a really solid setting to play with.