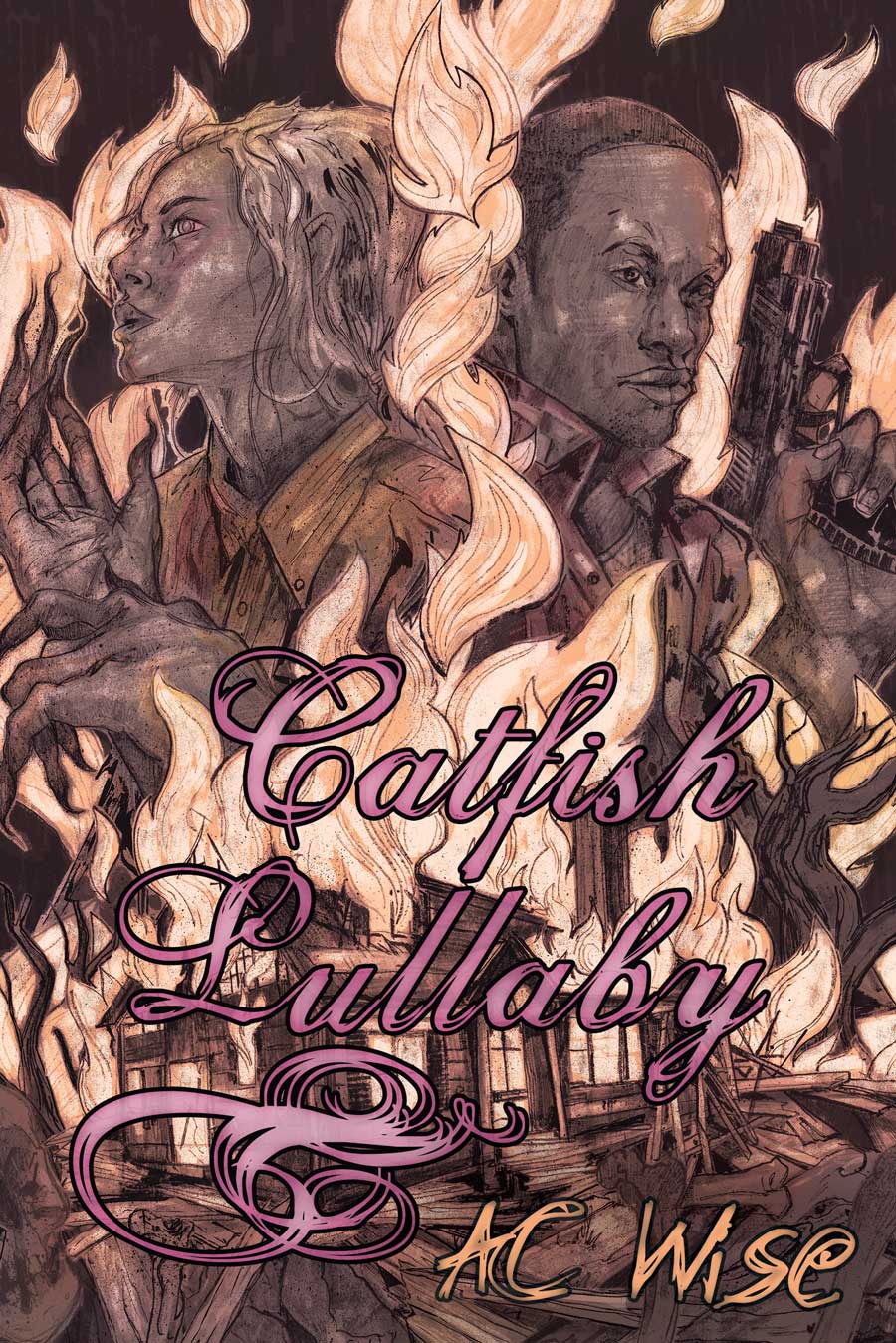 Small town secrets lead to trouble for everyone as Caleb must confront the demons of his past in this Southern Gothic queer cosmic horror.

This is a split story following Caleb and Cere, part as children, part as adults, as they deal with homegrown bigotry, sorcerous generational evil, and the everpresent, bog-monster specter of Catfish John. All while embracing the love of found family.

Written by AC Wise and cover by Sishir Bommakanti with Scott Gable on design. Early reviews have been amazing! Hope you love it!

Lewis is a Town of Secrets
The Royce family has been a plague on the small, Southern town of Lewis for generations. Caleb has heard rumors about the family his whole life, just like he's heard the rumors about a monstrous creature known as Catfish John living in the swamp.

When the Royce house burns down, Caleb's father—Lewis's sheriff—takes in the sole survivor, a young girl named Cere. Caleb quickly learns the truth about Archie Royce and the terrible fate he had planned for his daughter. After a woman is brutally murdered, Cere begins to suspect that not all of her family perished in the fire, and she and Caleb set out to stop her father's dark vision from coming to pass.

Years later, Caleb is the sheriff of Lewis, and the monsters of his childhood return. Now Caleb must fight to protect those he loves from Archie Royce's legacy, and his best hope may be a legend he's almost managed to convince himself never existed—Catfish John.

Reviews
"Wise’s visceral language conveys an experience of eerie magic that simultaneously lures and repels, placed in close juxtaposition to the mundane monstrousness of prejudice, cancer, and loneliness. This story can be appreciated simply for its ghost story shivers and rich imagery, but its full power comes with the author’s choice to center the misunderstood and marginalized as beloved family to one another, even when the outside world sees them as monstrous." (Publishers Weekly, starred review)

"Catfish Lullaby seamlessly combines Southern folklore with cosmic horror. There's an elegiac undertone to this lullaby that's as deep and mysterious as the bayou where it takes place." (Craig Laurance Gidney, author of A Spectral Hue)

“In her excellent novella, AC Wise revisits a Louisiana family at key moments during the later decades of the recent past—moments connected to what seems to be a local legend, one concerning the conflict between a pair of fantastical figures. Not only do her protagonists discover that what they took for fantasy is fact, they learn that it is more complicated than they could have expected. The result is a compelling narrative that begs to be read in one sitting.” (John Langan, author of Sefira and Other Betrayals)

"Folk tales give birth to new mythologies in AC Wise's delightfully enthralling Southern Gothic novella Catfish Lullaby. Flooded with dark sorcery and white-knuckle suspense, Catfish Lullaby demonstrates the many ways saviors and devils can occupy the same body, whether it arises from the depths of the swamp or the dark of the grave." (Mike Allen, World Fantasy Award–nominated author of Unseaming and Aftermath of an Industrial Accident )

"Over the last few years, A.C. Wise has been consistently creating some of the very best speculative short fiction out there, and now with her glorious novella Catfish Lullaby, she takes her craft to a whole new level. With a potent atmosphere, a formidable antagonist, and well-drawn, unforgettable characters, this book has definitely got it all. An absolute must-read for 2019." (Gwendolyn Kiste, author of The Rust Maidens and Pretty Marys All in a Row)

"What we need is a satisfying, believable story with engaging characters, and that’s what Wise delivers with this weird, suspenseful tale." (Brandon Crilly, for Black Gate)

"[Caleb's] outsider status forces him to confront demons both literal and figurative, and it results in a deeply affecting coming-of-age story." (Carson Winter, for Signal Horizon)

"[A] story that will suck the air from your lungs with its beauty, poignancy, and terror, leaving you on your knees wheezing for more." (The Miskatonic Review)

From the Author
"Even though Catfish Lullaby has its share of monsters, darkness, and characters fighting to save the world," A.C. says, "at its heart, it's a story about family. Caleb lost several people in his life early on, and he's terrified of losing the rest of the people he loves. As an adult, the very concept of family frightens him, even as he craves that closeness and connection. For Cere, her journey is about overcoming the family she was born into and protecting the family she chooses.

"In-between family and fighting monsters, Catfish Lullaby is also a novella about the power of stories—how legends are born, how they are passed down through the generations, and how they can shape a person's worldview for good or for ill."

Grab your ebook today at Amazon | B&N | Kobo | DriveThruFiction. Or swing by Broken Eye Books for the paperback edition.

Broken Eye Books is an independent press, here to bring you the odd, strange, and offbeat side of speculative fiction. Our stories tend to blend genres, highlighting the weird and blurring its boundaries with horror, sci-fi, and fantasy.