Press [Chaosium] A recent addition to my collection... 29 years after unknowingly insulting the President of Avalon Hill : ('Out of the Suitcase') 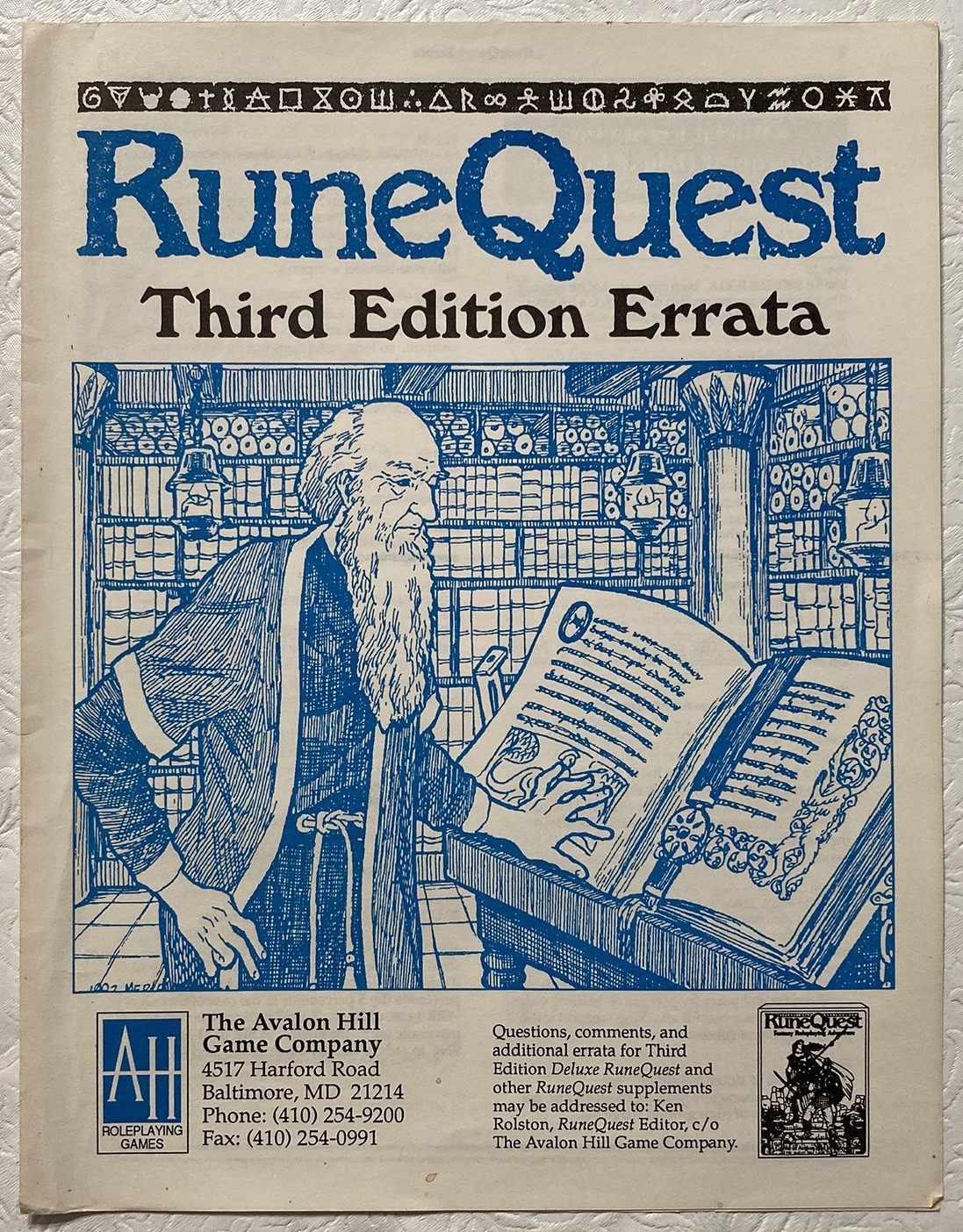 While attending RQ Con 1 in Baltimore way back in January of 1994, I gladly took a small bit of time to wander through the "dealer area." While there, I scanned through everything on offer at the Avalon Hill "booth" and ultimately spied a stack of the RuneQuest Third Edition Errata booklets on their main table. While I read the booklet an older gentlemen walked over and asked me if I had played RQ3. Without really thinking about my answer I looked up and blurted out something like "no, I don't like what Avalon Hill does with the game, and they don't really listen to us fans." As the words came out, the look on his face rapidly turned quite sour. He must have taken it as some sort of personal insult, so I quickly moved on without taking one of the booklets.

The gentleman was there the next time I stopped by, so I gave up trying. While chatting with Greg Stafford later the same day I mentioned the incident and his face lit up with impish glee. "You said that to Jack Dott?, that's cool."

It took me a few moments to realize that I had unknowingly insulted the President of Avalon Hill, the publisher of the game...

Fast forward to December of 2022 and I finally managed to purchase the errata booklet on eBay. It's one of those items I thought I would easily add to my collection, yet it turns out it took me nearly 29 years more than expected.

The 4-page RuneQuest Third Edition Errata booklet addresses numerous rules related problems, but otherwise isn't very interesting*. The RQ3 rules were first published in the summer of 1984, and the errata is dated March 3, 1988. As far as I know these corrections never made it into the actual text of the rulebooks in the boxed set(s), even though they were reprinted several times. 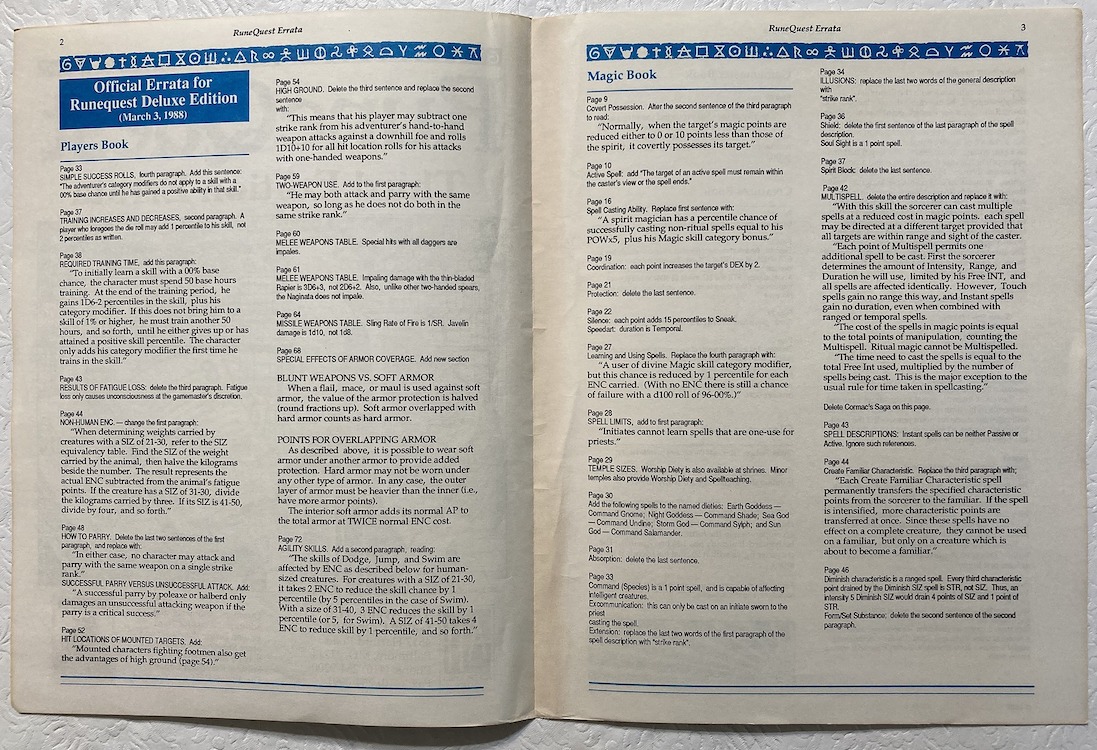 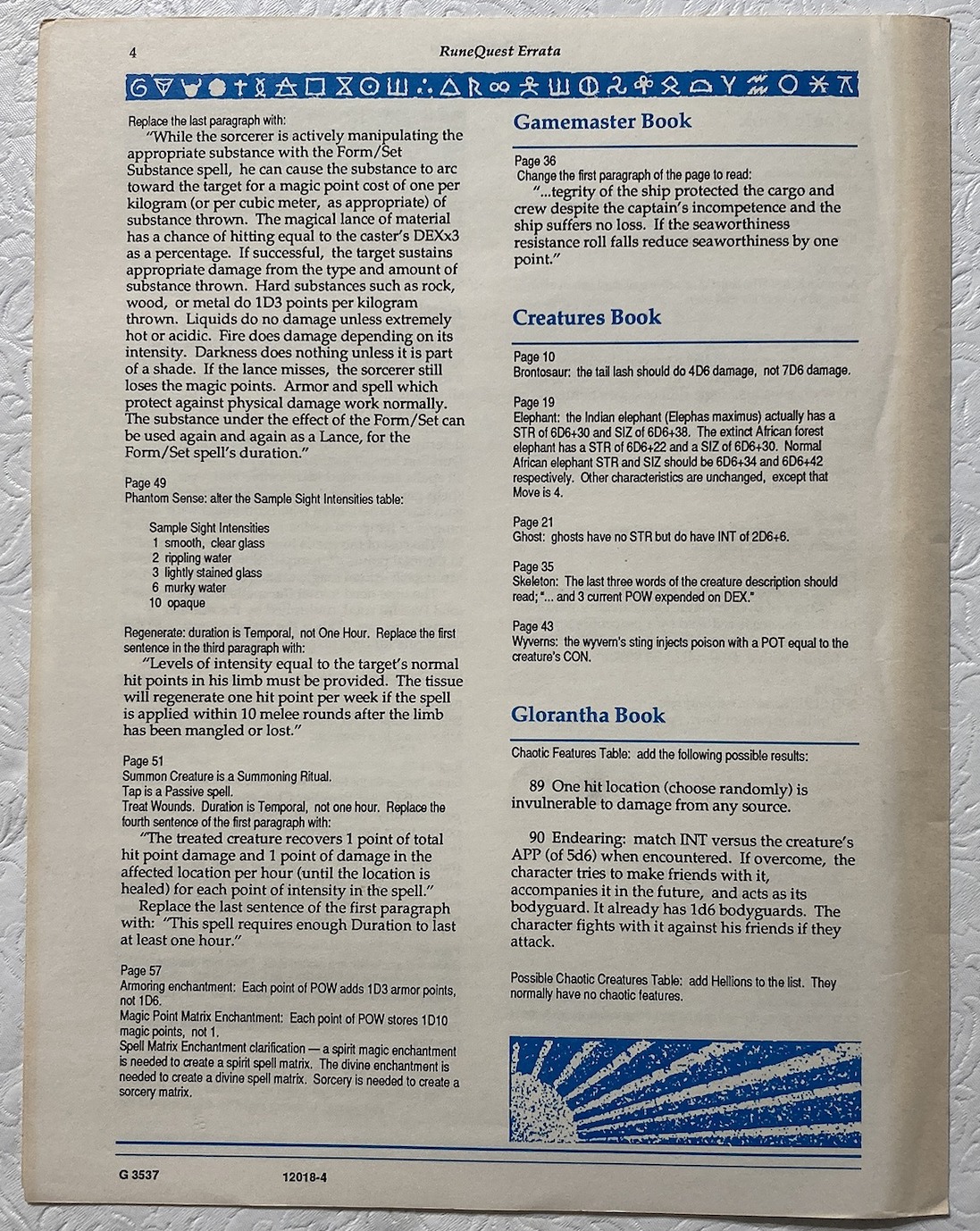 ​
The errata sort of ended up in the 1993 perfect bound Deluxe Rulebook, but only as pages at the end of the book. At least they updated the page references in the errata section for the new page numbering used in this printing. 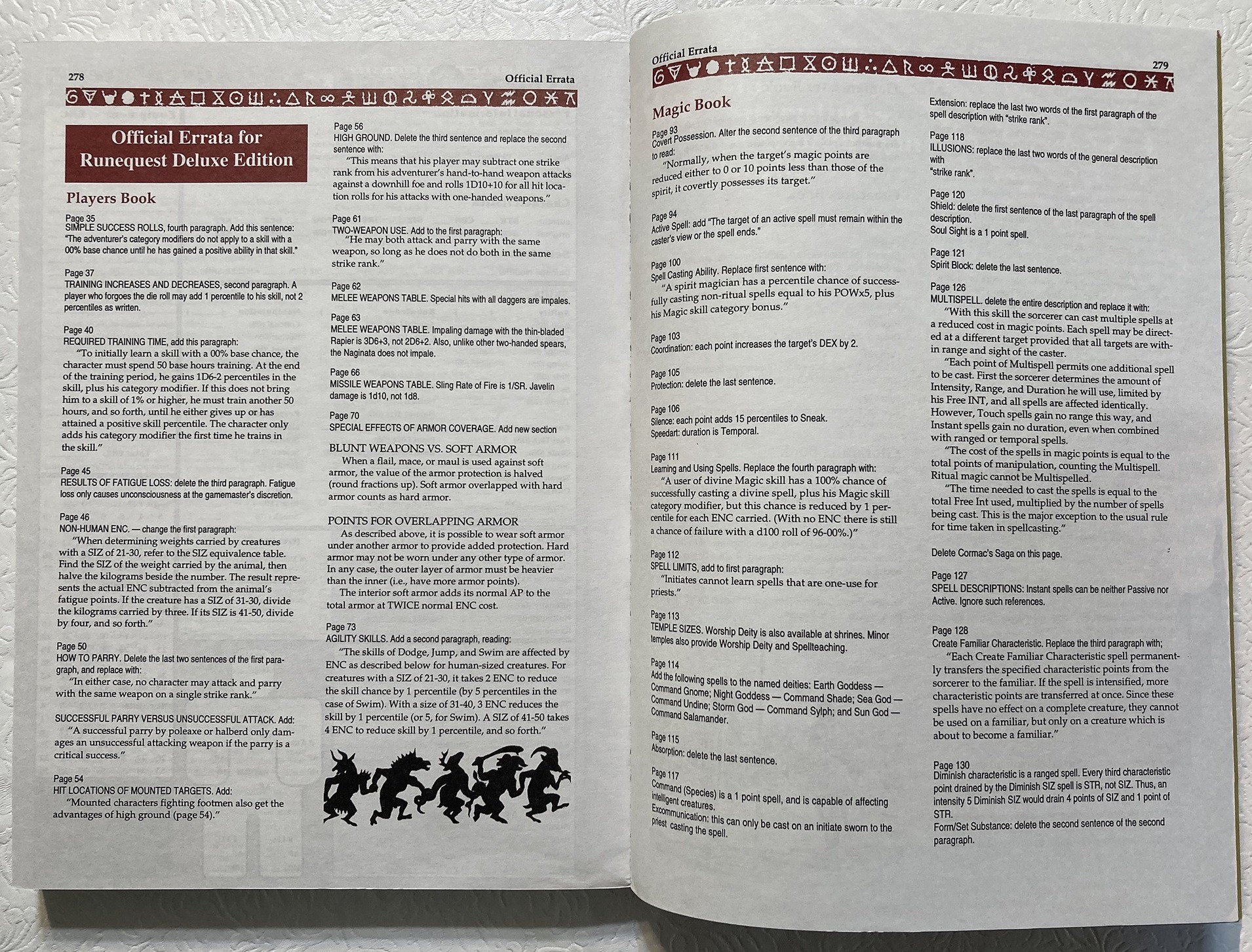 ​
One last thing of note is that it doesn't fit into any of the rules related boxed sets, which are all smaller than 8.5" x 11". Thus, I don't think they ever included it in any of their boxed sets. Feel free to prove me wrong if it came inside one of your RQ3 boxed sets. That would mean I have another one to collect...


*MOB adds:
Like Rick, I first saw the Errata booklet at RQ Con I in Baltimore in January 1994. Unlike Rick, I managed not to offend Jack Dott and so was able to pick up a copy which I still have in my collection somewhere.

Although, as Rick says, the errata is dated March 3 1988, the blue Errata booklet couldn’t have printed until late 1991 at the very earliest, and probably later, perhaps even just before RQ Con I. 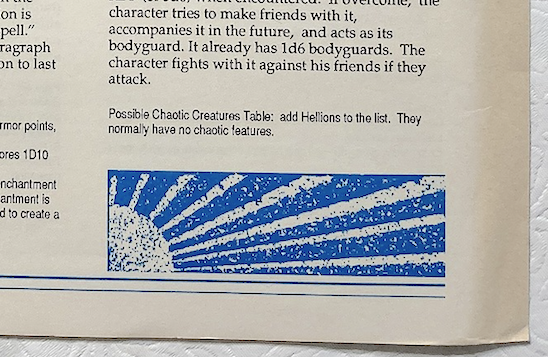 The reason I know that is the layout template used is exactly the same one we created in late 1991 for my RQ3 supplement Sun County, right down to the blue color, and reusing the sun rays motif. (This template was then used for all of the subsequent 'RuneQuest Renaissance' releases, though with different color schemes and motifs.)

The art featured on the Errata booklet's cover page is Sun County cover artist Roger Raupp’s evocative depiction of Hector the Wise, the aged Sun Dome Temple librarian. That art wasn’t even commissioned until mid-1991, and the Sun County book itself wasn’t finished until early 1992.