"Since launching the Jonstown Compendium two and half years, it has been thoroughly embraced by fans of RuneQuest and Greg Stafford's world of Glorantha, both creators and players alike. Jonstown Compendium titles regularly top DriveThruRPG's Top Selling Community Content list. In fact, today six out of the top ten titles are Jonstown Compendium, including the top three. And the remaining four are from the Miskatonic Repository, our similar independent creator program for Call of Cthulhu!", said Chaosium vice president Michael O'Brien. 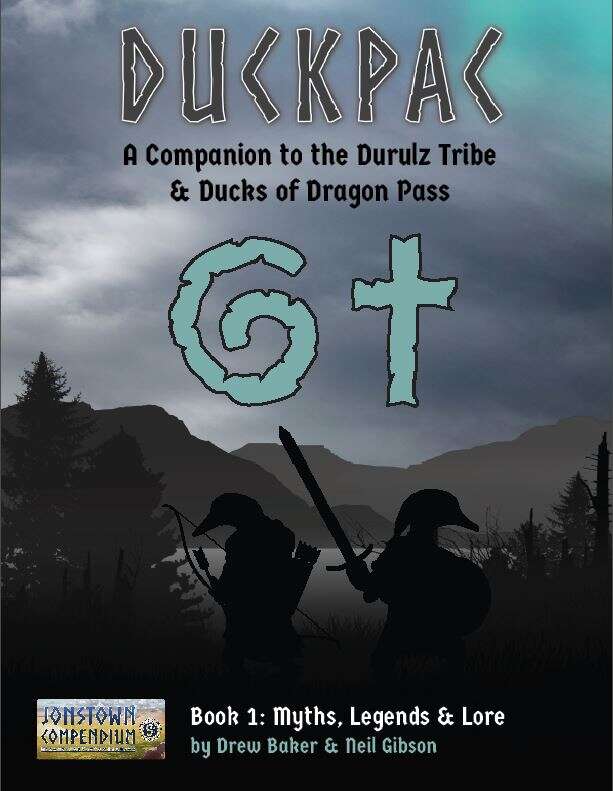 “The Antelope Lancers are gone sir and the Bell Temple cavalry is in tatters. It was the ducks sir! Feathery little bastards hiding in the water and reeds, slitting the mounts bellies as they rode past. I thought General Fazzur had done away with ‘em all but looks like Starbrow managed to get some of the cowardly freaks to fight. The Char-un heavy cavalry will finish the job though sir and the island will be ours!”

Love or hate ducks as you will, but never underestimate them. That would be a costly mistake (just ask the surviving members of the Imperial cavalry that took part in the Battle of Dangerford!)

This volume serves as an introduction to the Durulz Tribe of Duck Vale in the southwestern corner of the Kingdom of Sartar and provides a view of the tribe and race including:
Illustrated throughout with new artworks specifically commissioned for the DuckPac series, Book 1: Lore, Legends & Myths provides a primer for both the gamemaster and player interested in interacting with the tribe or playing a duck adventurer. 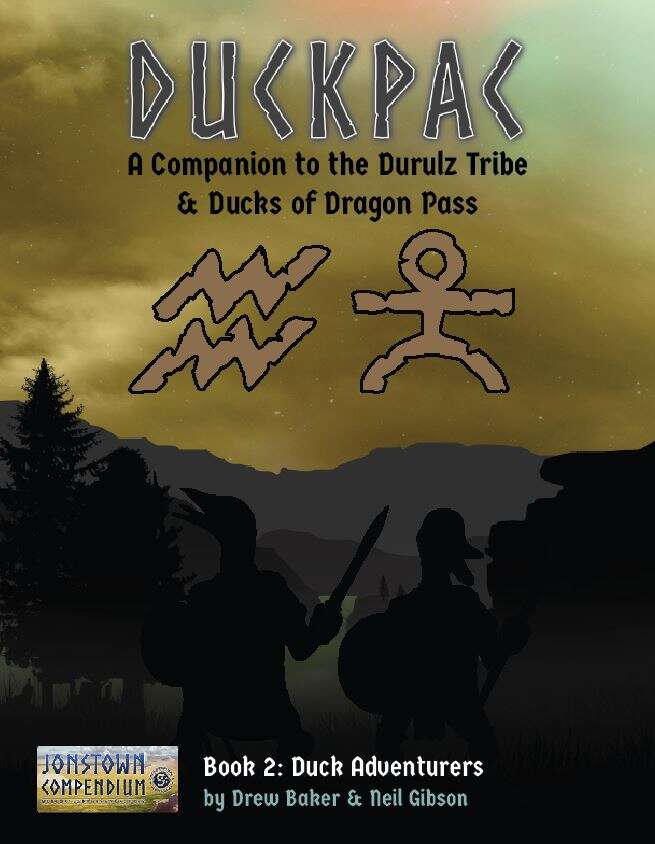 "Yellowbelly Dampmarsh had heard it all before. The jokes, the slanders, the racism. That was all just harmless banter. I mean ducks, no sense of humor! Am I right or am I right? Whether the two braggarts at the bar had seen him squatting in the corner with his bowl of soup or were just bigots, Yellowbelly didn't care. Just one more “Why did the duck cross the road?” joke and the answer would be discovered by the two loudmouths about ten minutes after they left this particular drinking establishment. He was certain it would involve a punchline neither of those monkey-boys would forget in a hurry."

Amongst all the tribes of Sartar, the Durulz are unique, being the only tribe that can be said to be truly non-human. You may mistake a Telmori for just another backwoods hunter but a duck is difficult to miss. However, being different has its drawbacks. But it also has its advantages…

This volume provides an in-depth guide to creating your duck adventurer with a family origin in the homeland of Duck Vale located in the southwestern corner of Sartar. 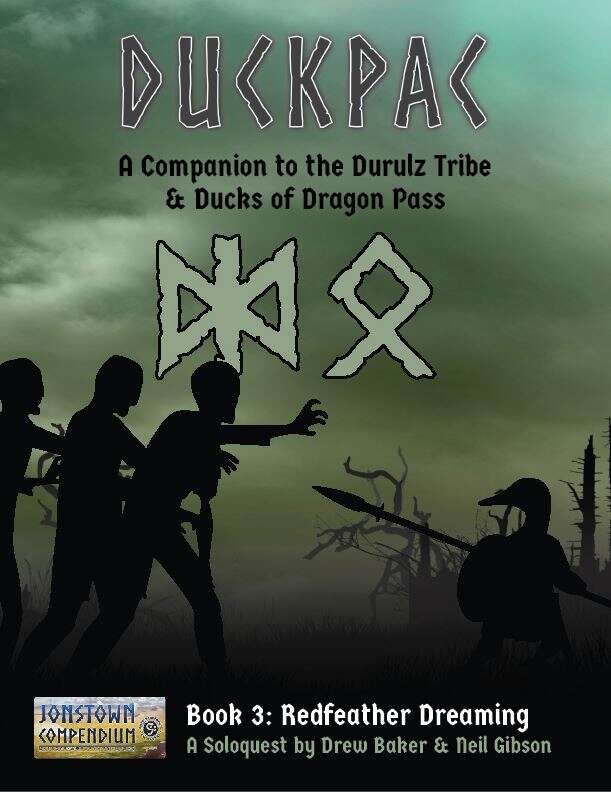 Spending Sacred Time at Redfeather Safe is part of your obligation to kith and kin, but when a distinguished guest arrives unexpectedly things take a strange turn. Rudely woken, interrogated, and then… Well, that is up to Luck, Fate, and the decisions you make.

Explore the dangers of the Upland Marsh, one of the most notorious regions in Dragon Pass. With over 50 locations to discover, denizens to encounter, and puzzles to solve, the choices you make may change the direction of the Durulz Tribe forever.

This volume is a SoloQuest designed for starting duck adventurers inspired by the classic SoloQuest series by Alan LaVergne and Book 3: SoloQuest from the RuneQuest Starter Set.

Forthcoming title in this series:

DuckPac - Book 4: Gamemaster’s Scenarios – A set of standalone and linked scenarios, encounters and plot seeds for the gamemaster to run for duck adventurers and their closest of companions.

What the Critics Say about the Duck Pac series​

"Worthy of the classic TrollPak. DuckPac is brilliant, a cohesive, sensitive, and sometimes tongue-in-cheek examination of what arguably is Glorantha's most iconic species. It's a 'must have'." — Andrew Logan Montgomery, author of the Six Seasons in Sartar trilogy. 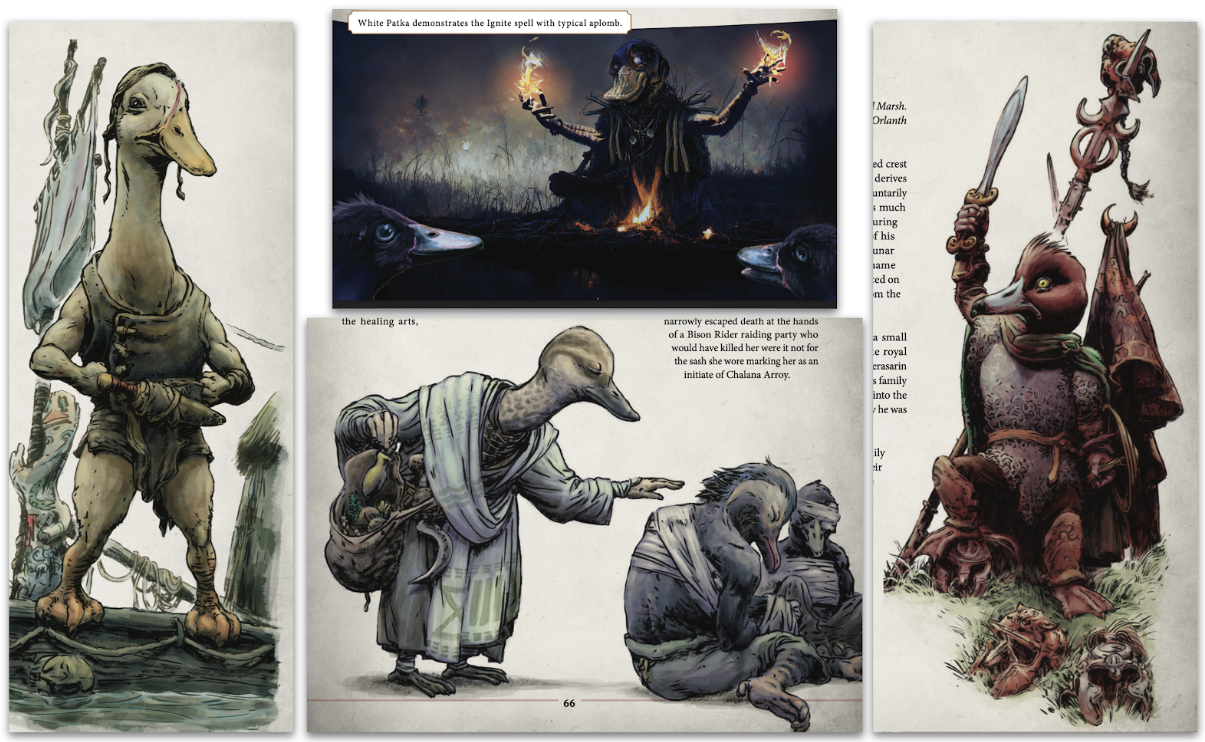 Some of the art by Drew Baker, Neil Gibson, Tania Rodriguez, Rick Hershey, Lee O'Connor, Dominic Reardon, John Spelling and Forge Studios, which Andrew Logan Montgomery says "are the best looking Ducks I have seen in 40 years of playing RuneQuest."​

More about the Ducks​ 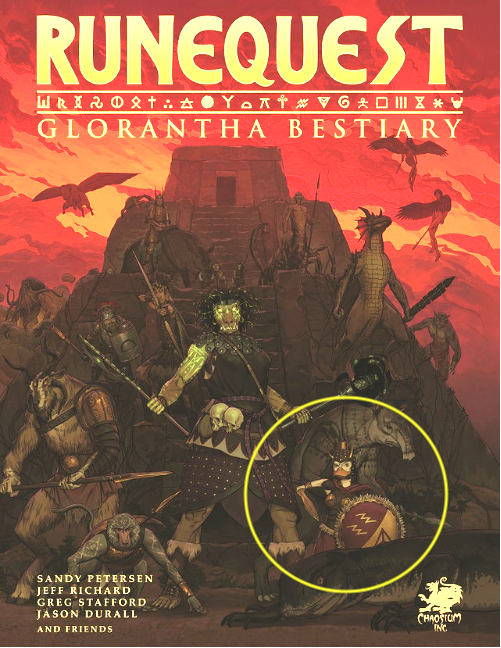 In his Out of the Suitcase collector series, Chaosium president Rick Meints discusses the origins of the ducks in 1975's White Bear & Red Moon, RuneQuest 1st Edition (1979), and Foes (1980). RuneQuest co-creator Steve Perrin also gives a personal account of their genesis - "We were also lacking some kind of Hobbit equivalent for those players who really insist on a challenge. Came the Ducks..."

Ducks in RuneQuest have remained perennially popular ever since, and feature in the RuneQuest Glorantha Bestiary for the current edition of the game (see circled on the cover!). The ducks are one of the non-human species detailed for use as RuneQuest player character adventurers, complete with their unique professions, cults, and magic.

Publisher
And we have also recently marked the milestone of 1000 titles in the Miskatonic Repository, our similar independent creator program for Call of Cthulhu!

Today Chaosium celebrates the release of the 1000th title in the Miskatonic Repository, Chaosium's community content platform for independent Call of Cthulhu creators at DriveThruRPG! Chaosium vice president Michael O'Brien said, "We congratulate the hundreds of creators involved in reaching...

Release [Chaosium] "Some of the most creative, fun, and innovative work being put out right now" (Jonstown Compendium)