The Starter Set for RuneQuest: Roleplaying in Glorantha is coming! Between now and its release later this year, RuneQuest creative director Jason Durall's Design Diary will share insights about the development of this exciting new boxed set which will introduce the RuneQuest RPG and Greg Stafford's mythic world of Glorantha to all-new audiences.
Now that the RuneQuest Starter Set is – finally! – available [get your copy here!], you may be wondering what comes next if you're getting into RuneQuest...

Often, the course of development and the release schedule are inscrutable for fans, but when pieces start coming together, things become clear. 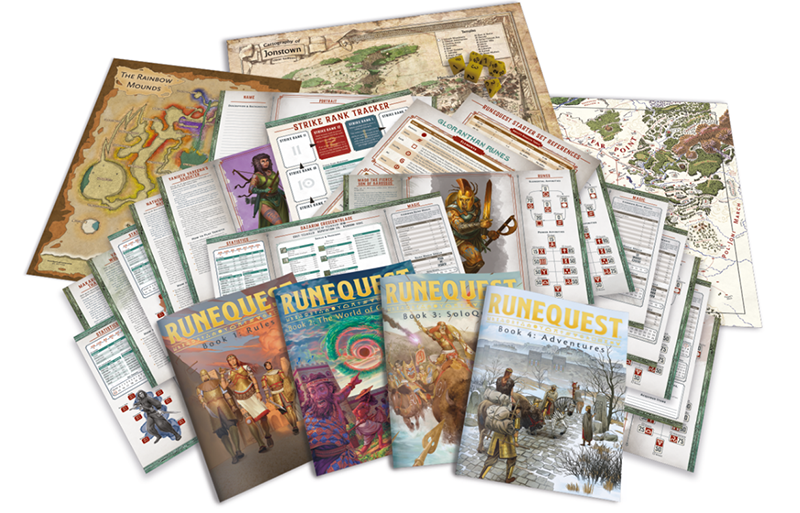 ​
The RuneQuest Starter Set is designed as a gateway product allowing players and gamemasters to begin playing RuneQuest with as few barriers as possible. The fourth booklet, Adventures, contains a variety of rumors and story seeds specifically designed to extend the life of the Starter Set beyond the use of the SoloQuest and the three standalone adventures.

These can be fleshed out into interludes, full adventures, or even inspire new campaigns, with minimal effort and few external resources. The description of the city of Jonstown is intended as a base for adventure far beyond the scope of the Starter Set adventures, including all of the information you need to run entire campaigns based there!

If you want to keep playing, the next and best stop is getting hold of the RuneQuest core rules and the Gamemaster Screen Pack. These are available singly or in a deluxe slipcase combined with the Glorantha Bestiary.

The rulebook will help flesh out your adventurers with more spells, more paths for advancement, and the full rules allow for situations not covered in the Starter Set, but pound for pound (or rather, kilo for kilo), the best value is the RuneQuest Gamemaster Screen Pack. There you’ll get a full calendar, maps, a rules reference, a deluxe four-panel landscape gamemaster screen, but also an Adventures booklet like the one from the Starter Set, this time with a variety of adventures set in and around Apple Lane and the fortress-city of Clearwine. 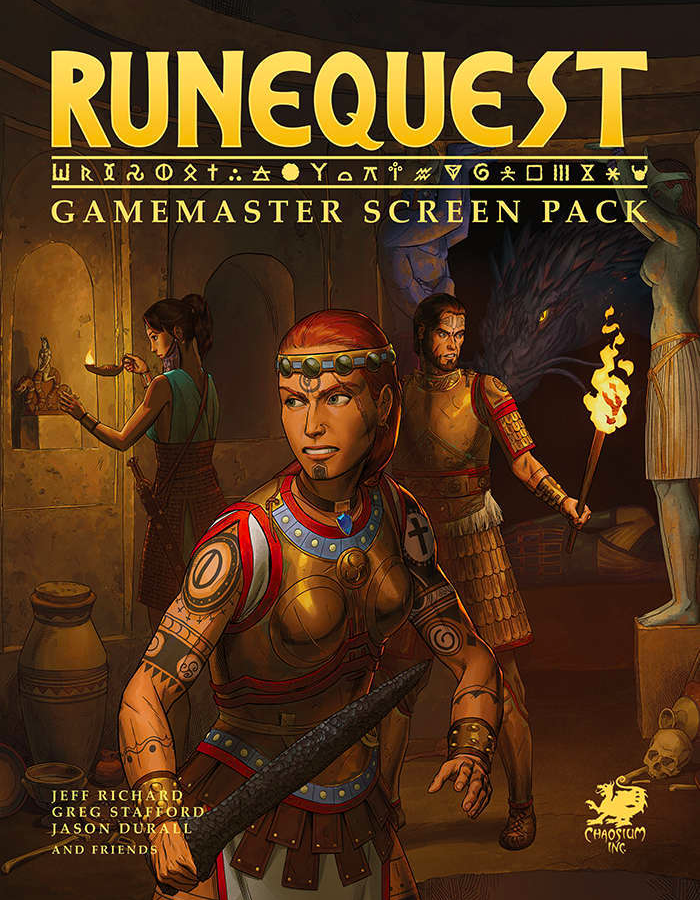 ​
For those not familiar with the geography of Sartar and Dragon Pass, Apple Lane is just on the other end of the Afritha Vale, barely a couple of days’ walk away. This sleepy little hamlet is part of the material covered in the Glorantha booklet in the Starter Set, and thus players will be able to easily move from Jonstown to the west, for additional adventures set in the region. On a map, sharp-eyed fans will notice that Jonstown forms a triangle with Apple Lane and Clearwine, with a number of adventures set within that very area. 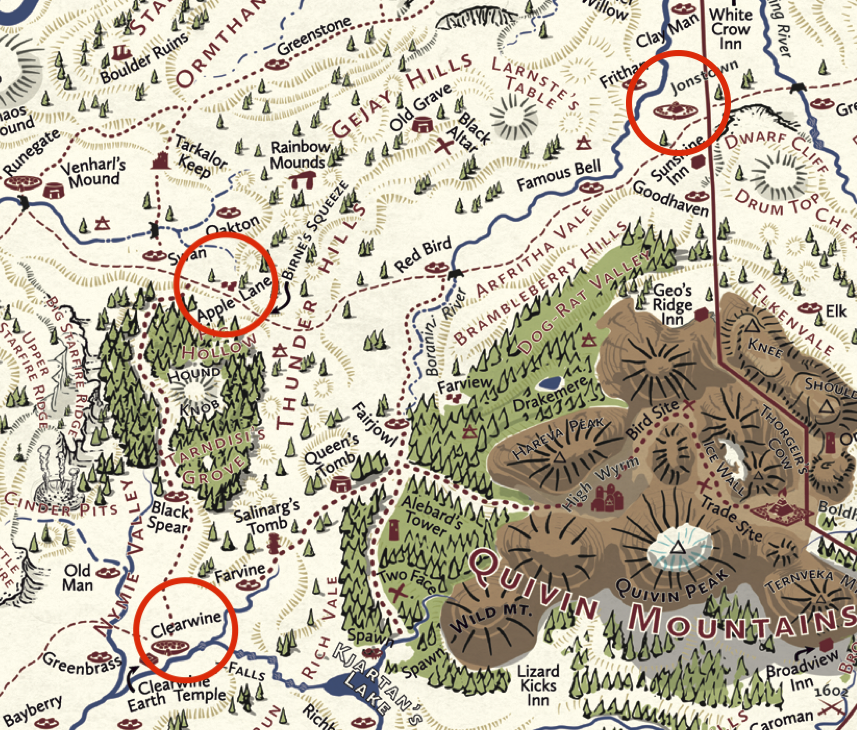 ​
Like the Adventures book in the Starter Set, the Adventures book in the Gamemaster Screen Pack contains three full-length ready-to-play adventures, along with story seeds, rumors, non-player characters, monsters, and standalone encounters that can lead to further adventures. Together, just the Starter Set and the Gamemaster Screen Pack contain enough ready-made entertainment for many, many sessions of play. Adding the Glorantha Bestiary to the mix adds non-human adventures, particularly from the Elder Races such as elves (Aldryami), dwarfs (Mostali), trolls, trollkin, centaurs, minotaurs, baboons, Agimori half-giants, and even ducks!

From there, one could then use the adventure collection The Smoking Ruin & Other Stories, which contains additional source material and several ready-to-play adventures in the surrounding region. The Pegasus Plateau & Other Stories presents even more adventures spread across a wider area, designed for new players to Glorantha, opening the whole of Dragon Pass to adventure! 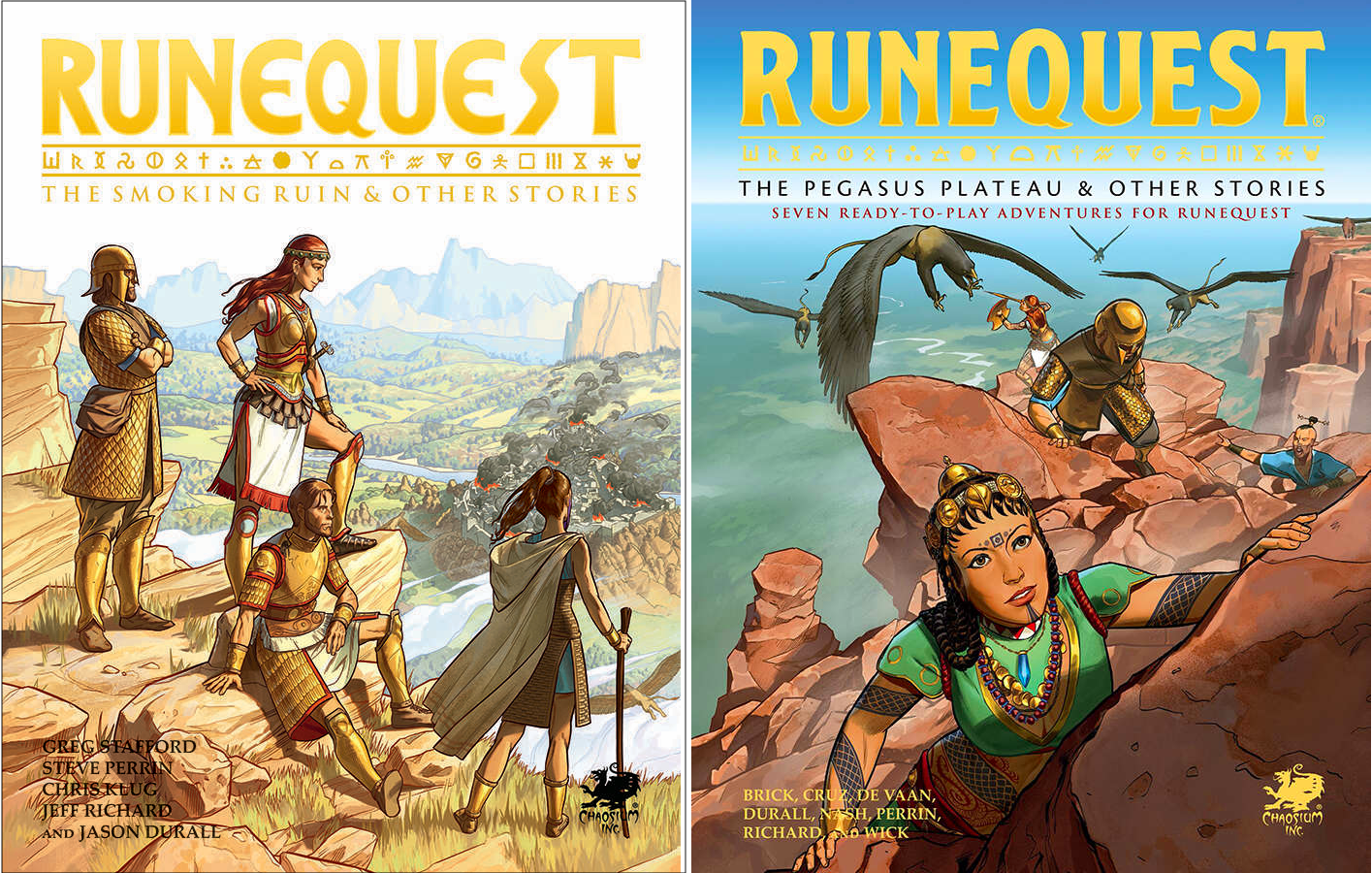