Press [Chaosium] The First Appendix N: 'Out of the Suitcase' with Chaosium President Rick Meints

Publisher
Chaosium President Rick Meints shares stories from a life-time as a collector of all things Chaosium. 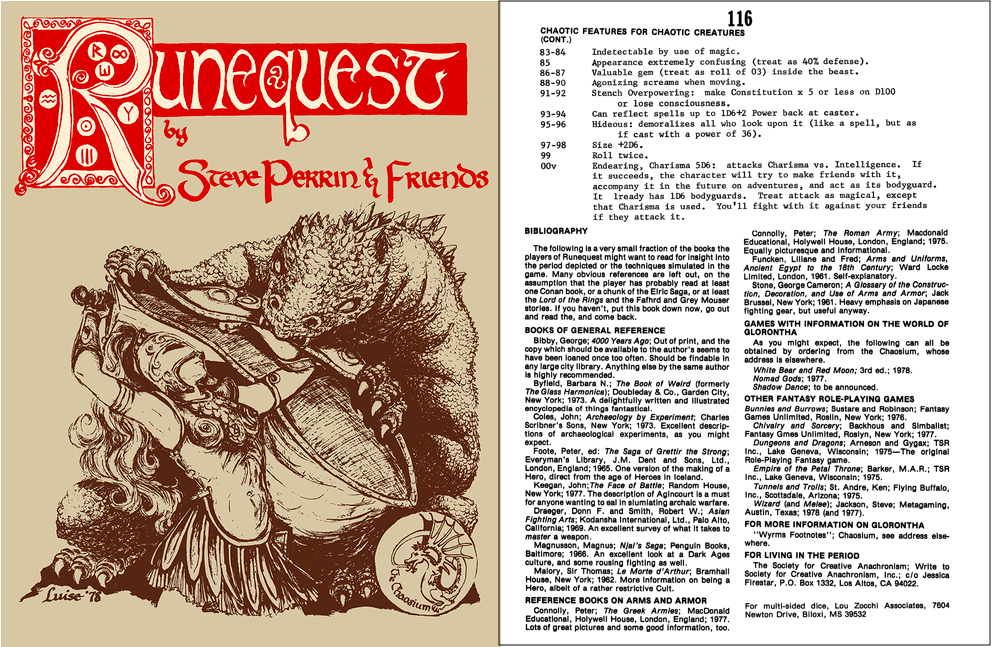 "Both bibliographies are the fourteenth appendix in their respective volumes, which is quite a coincidence – and a coincidence I am sure it is (for logistical reasons, if nothing else). Even if it weren't, the writers of RQ make it quite clear that, despite superficial similarities, their Appendix N is actually very different in both its content and intention than Gygax's own list. This becomes even clearer as you take a closer look at it.

"RuneQuest's Appendix N offers a fascinating contrast to Gygax's own... Reading them side by side, one is immediately struck by the different cultures that produced each game – as anyone who has played them can attest. It's precisely those differences that enabled them to exist side by side, appealing as they did to different tastes, sensibilities, and interests." — Grognardia."

RuneQuest’s bibliography humbly preceded Appendix N, and its genius is in its simple motivating force for others to do likewise. It inspired, sometimes subtly. But it was technically Appendix M! Here’s why...

The first edition of RuneQuest (published June 1978) was divided into 10 sections, the last of which was X. Referee Notes. The thirteenth topic in that section (p.116) was a Bibliography of inspirational books, followed by a short list of Gloranthan games, other fantasy roleplaying games you might like to try (including Dungeons & Dragons), and the contact details for the Society of Creative Anachronism (SCA) and the dice manufacturer Lou Zocchi. The parts of RQ1's Section X were not assigned letters, but if they were, the bibliography would have been assigned the letter M.

The second edition of RuneQuest (now available as RuneQuest Classic) was in layout by the summer of 1979, and was published in September of that same year. RQ2 updated the overall organization of the book and Section X was renamed Appendices. The Bibliography was now the 14th topic, so it was assigned the letter N. (The list of Gloranthan games had grown substantially and was moved into its own listing as Appendix O.) 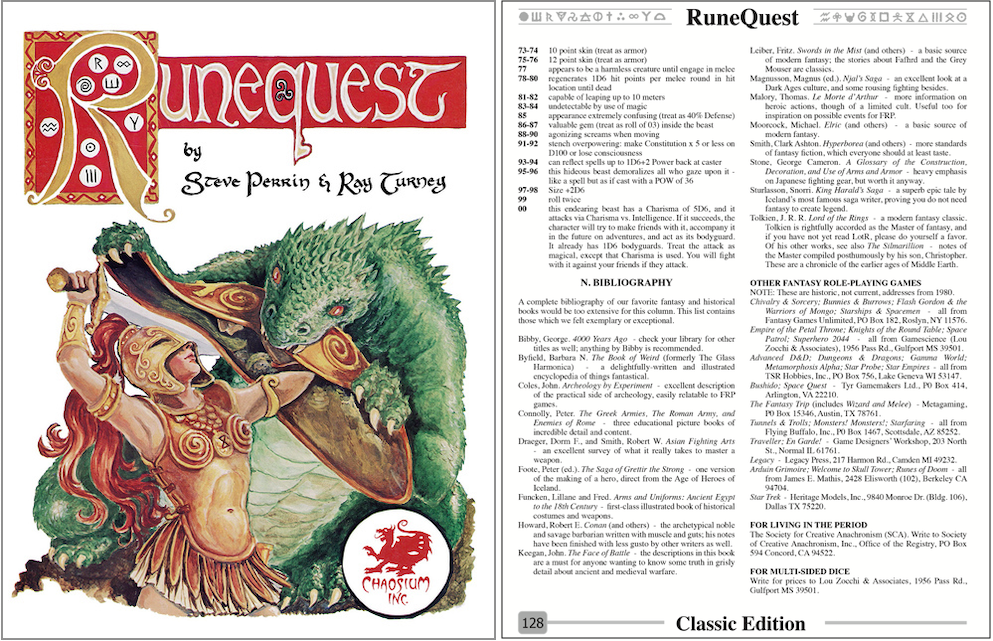 ​
Just as Grognardia thinks it's a coincidence, I am 99% certain that Greg and company did not deliberately make the RQ2 Bibliography "Appendix N" because Gary Gygax had done so in the first edition of the DMG, which was published one month earlier in August 1979. But both bibliographies offer fascinating insights about the literary inspirations for each game. In our obsession with original creation, we too often forget simple coincidence. Tell us your inspirations, your call to arms, and the shadows of the past that inspired you to shine a light upon the future.
Last edited: Jul 30, 2021

White Wolf has/d its own list of recommended sources at the end of all its books--the original Vampire had:

And technically Call of Cthulhu had all of HPL's works; I think they usually had a list of their favorite Lovecraft stories--not to mention each of the monsters and gods had a quote from a specific story introducing its entry in the monster table.

When you look at Appendix N as a collection of mostly action- & adventure- based fantasy, it becomes easier to understand exclusion of the more atmospheric, doomed fiction of CAS. But then with HPL on the list, that excuse goes right out the door. Interviews with Tim Kask indicate that Gary Gygax loved CAS, but didn't consider him as influential on the development of D&D as other authors.

I tend to agree with people like the Appendix N Book Club that just list his work alongside the rest.


It could be argued that there has never been an RPG that wore its influences on its sleeve as much as Vampire the Masquerade did. The books were positively dripping with quotes from lyrics and literature. And the Storyteller's Guide outright listed bands and albums to listen to for inspiration.


Blue Orange said:
White Wolf has/d its own list of recommended sources at the end of all its books--the original Vampire had:

And technically Call of Cthulhu had all of HPL's works; I think they usually had a list of their favorite Lovecraft stories--not to mention each of the monsters and gods had a quote from a specific story introducing its entry in the monster table.
Click to expand...