Press [Chaosium] The first Manual of Monsters: 'Out of the Suitcase' with Chaosium President Rick Meints 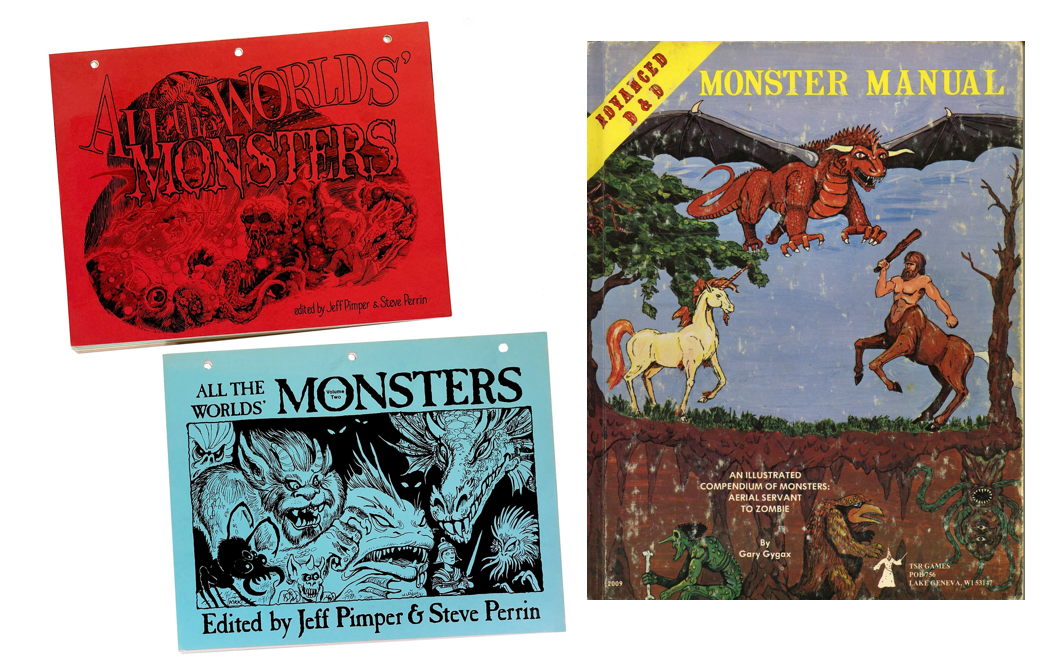 Steve Perrin's unexpected passing has gotten me to thinking about his far-reaching legacy within the world of role-playing games. As I ponder his role in those early days I find myself pulling various books off of my shelves and rereading the contents of some quaint and curious volumes of forgotten lore. It feels like catching up with old friends.

Here's one such story from the golden age of RPGs.

The first Steve Perrin project for The Chaosium debuted in the Fall of 1977. It was only the ninth product produced by the fledgling company. This was the 120-page All the Worlds’ Monsters, edited by Jeff Pimper and Steve Perrin.

All the Worlds Monsters featured over 250 monsters written by over two dozen authors. The Chaosium thought it prudent to sell it as loose-leaf sheets of three-hole punched paper, ready to go into a standard three-ring binder.

They were indeed wise to do so, because a few months later in 1977 the 124-page All the Worlds’ Monsters Volume Two was published. Collectively, these two works provided the stats for over 500 monsters, ranging from D&D level 1 to level 14. For added versatility, the second volume also included four pages of conversion notes for using the stats with Tunnels & Trolls by Ken St. Andre. A third volume of All the Worlds' Monsters appeared in 1980.

The earliest references I have found to the All the Worlds’ Monsters project are in Steve Perrin’s ongoing “Tuesday Morning Report” articles published in early issues of the famously enduring Alarums & Excursions. At the end of report #2 in A&E #13 (Aug. 1976) Steve announced:

Coming around the end of the year: All the Worlds’ Monsters, an annual dedicated to describing all the monsters currently extant in the D&D world.
Click to expand...

Oh yes, Greg, the name of the publication will be “Jeff’s All the Worlds’ Monsters”. Note the position of the apostrophe; this means we have the monsters of more than one world. One world we will not have in the book, by the way, will be TSR’s. Their lawyers have written us their standard letter, and we don’t feel like making an issue of it.
Click to expand...


In A&E #22 (May 1977) Steve confirmed that the publisher would be The Chaosium, and that he expected the first volume to be available by September.

Steve’s Tuesday Morning reports provide an interesting look into his early work. In A&E #25 (Aug. 1977) Steve shared that on July 1st, 1977 he had started play-testing the White Bear & Red Moon roleplaying game devised by Art Turney, Ray Turney and Hendrik Pfeiffer. I think we all know how that one turned out.*

Lawrence Schick, the author of Heroic Worlds: A History and Guide to Roleplaying Games (1991), described the Monster Manual with the phrase "As nothing is easier to design than new monsters, it has spawned a host of imitations." Of course, he could have easily also said that All the Worlds’ Monsters wasn’t one of them.

Thank you Steve and Jeff, for writing the first and second manuals of monsters ever published. You blazed a trail so many of us enjoyed walking down, even if we didn't know it at the time.

*you can read more about what that momentously led to here, in Steve's own words:

For the RuneQuest Classic Kickstarter in 2016 Steve Perrin generously provided a personal account of his role in the genesis of the RuneQuest roleplaying game. Although at the time of the Kickstarter we publicly featured an excerpt of Steve's recollections, the full account was only ever...

All three volumes of Steve Perrin & Jeff Pimper's All the Worlds' Monsters are available in PDF from Chaosium.com.

VOL 2 (1977) — 243 creatures from literature, fantasy, and nightmare. Included is a conversion article by Ken St. Andre for Tunnels and Trolls, and Steve Perrin’s historic “Conventions.”