D&D 5E Clash of the Titans' Djinn as playable race?

That prompted one of my players to ask if he could play a race based on the djinn in the movie. They are Arabian-themed sorcerers who, it is claimed, replace their body parts with "wood and dark magic".

The oldest one seen in the movie looks like this: 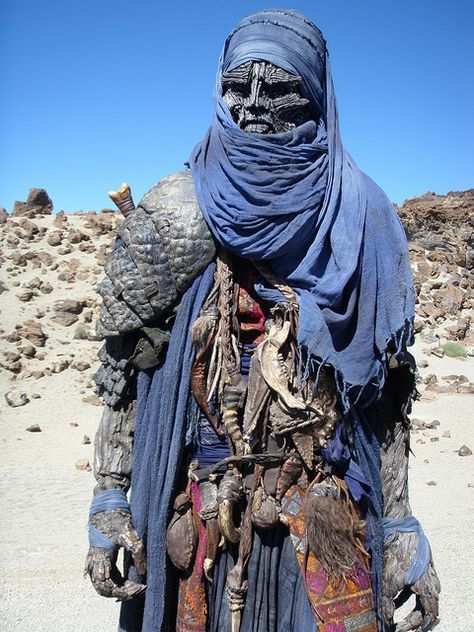 IIRC, some of the others looked more human with just bits of wood and stuff on them.

Warforged seems like it might be a good racial chassis (with just a visual reskinning, as it were) and a spellcasting class.

Anyone got any other/better ideas?

pukunui said:
Warforged seems like it might be a good racial chassis (with just a visual reskinning, as it were) and a spellcasting class.
Click to expand...

Not really for the race...

I'd probably lean to Warlock with the new Noble Genie Patron to double down on the djinn theme for their spellcasting, though any could work. I could also see re-skinning the Draconic Sorcerer to be Genie blooded sorcerers with some re-skin of abilities.

I just watched this classic movie film last week, and I’ve no memory of these guys.

The thing is, looking into it a bit more, some of the other djinn in the movie aren't as woody as their leader. It lends some truth to one of the in-movie statements that they replace their flesh with wood as they age / receive wounds / etc.

Having them be a human with dragon sorcerer reskinned as djinn with the dragon scales being woody bits might work to a certain extent.

I've also suggested to the player, though, that they just use the djinn as inspiration for a unique-looking warforged rather than trying to recreate the actual race in the movie.

We’ve agreed we’ll just use the warforged race as a chassis, but he wants to remove the not needing to eat, drink or breathe trait.

I know it’s mostly just a ribbon, but I feel like I should replace it with something. Maybe darkvision?

How often does not needing to eat etc come into play? Not very often IME. So Darkvision which is used frequently is a huge replacement.

Quartz said:
How often does not needing to eat etc come into play? Not very often IME. So Darkvision which is used frequently is a huge replacement.
Click to expand...

Not needing to eat (or drink) might not come up much. Not needing to breathe might come up a little more often, as you can't be affected by any airborne poisons or whatever. And you don't have to worry about holding your breath underwater. And the like. In some campaigns, that could be as useful - if not more so - than darkvision.

Yes, they are technically humanoids, not constructs.

How about adding Vulnerability to Fire?

I thought at first this was somehow gonna be related to City of Brass at first.

pukunui said:
he wants to remove the not needing to eat, drink or breathe trait.
Click to expand...

Why would he want to remove that? Do the Djinn in the movie eat? sleep? drink? I don't remember. I feel like if they've replaced their bodies with wood and other inorganic materials that they wouldn't need to eat/drink/breathe, but that's me.

Midgard has the Djunnborn race. Kinda like Genasi and Tieflings. It's in one of the heroes books for $5.

An ugly Goliath is another option. Or earth genasi.

Sounds like Genasi is one of the best options, especially with their elemental/djinn lore background


For not breathing: two of the Genasi subraces have traits related to breathing (Water is Amphibious; Air has Unending Breath). This trait is a small benefit and could cause a balance issue as it can affect encounters for exploration or combat, so be aware that some spells/items (see cloudkil and some poisons) still affect creatures who do not need to breath in the poison; you will probably need to discuss this ahead of time with the player to be on the same page.
Probably not a big enough issue to worry about, and if it comes up and the player gets a freebie for the encounter that will make them feel good about choosing to play this race.

For not sleeping: Trance (see Elf race) is just a ribbon ability, so you can give them that without any issues.

For not eating: I haven't seen many people track rations, so this can probably be hand-waved without issues. If tracking rations or similar resources is a large part of your game, it may affect the challenge that you wish exploration and travel to pose to the party.

Zardnaar said:
An ugly Goliath is another option. Or earth genasi.
Click to expand...

Wait... there are good-looking Goliaths somewhere?

Salthorae said:
Why would he want to remove that? Do the Djinn in the movie eat? sleep? drink? I don't remember. I feel like if they've replaced their bodies with wood and other inorganic materials that they wouldn't need to eat/drink/breathe, but that's me.
Click to expand...

It’s unclear. Some are more human than others. Only their leader seems to be fully wooden with magic eyes. I can’t recall if any of them eat or drink.

My player said he wanted the race to feel more alive than a construct does. He referenced the part in the movie where the leader’s beating heart is visible just before he explodes as the medusa is crushing him.

That said, he’s fine with the not needing to sleep part. He wants to describe the warforged resting trait as being when his PC does his self-repair, replacing his wounded flesh with “wood and dark magic”.

So it’s just that he feels his PC ought to still need to eat, drink, and breathe.

When the guy in the movie comments that they replace their internal organs, that could just be unreliable narration! We don’t actually know, and unlike with Star Wars, there’s no visual dictionary to explain everything we see in Clash of the Titans.


@Jediking: Just to be clear, we are talking about removing those traits from the warforged chassis, not adding them to some other race. Thanks anyway, though.
Last edited: Jan 23, 2020