Cloudsea: A Primer to Living Atop the Clouds: An Interview With Miguel Colon (Beyond the Horizon)

Miguel Colon has a new Dungeons & Dragons Fifth Edition setting that breaks with traditional fantasy settings for a quasi steampunk world in which you live above the clouds. Cloudsea: A Primer to Living Atop the Clouds offers a fantasy version of the Roaring 20s with twists and Miguel agreed to answer my questions about the book, his inspirations, and the citizenry. 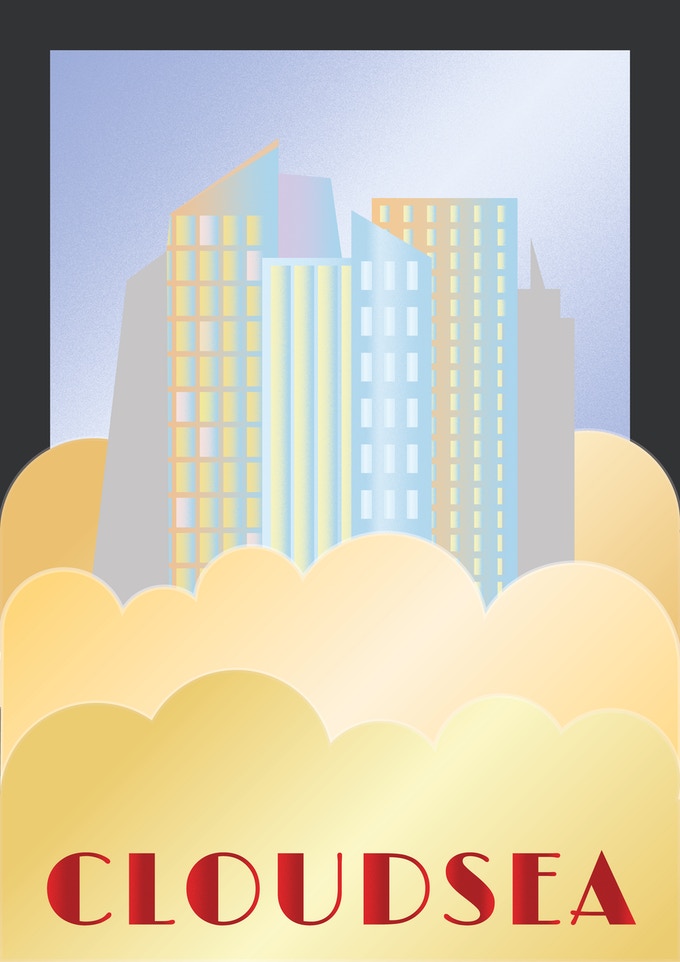 EGG EMBRY (EGG): Thanks for talking to me about your work. What is your RPG Kickstarter?
MIGUEL COLON (MIGUEL): I’d like to thank you for the time you’re giving me here to explain a bit about my project! It really is appreciated to be given a platform in which I can do this. But, as for the RPG Kickstarter itself, it is a project titled Cloudsea, which I like to think of as a bit of a mixture of different real world elements and elements from fiction that I have consumed over my lifetime. The real world portions of this include the racism faced by different peoples over time, and in different ways throughout recent history (I’d say focusing on the past 100 or so years). There are also elements of the Red Scare in American history that I am pulling from. As far as media influences, the main two would have to be the false utopia presented in Bioshock: Infinite as well as the clear dystopia presented in 1984.

But you probably want details as to what this is exactly. Cloudsea is a supplement for 5th Edition which is about 62 pages long at present, which presents a post-apocalyptic world that has rebuilt itself over thousands of years, escaping the radioactive surface world by building massive cities in the sky on the backs of air elementals that are bound into service. And trust me, the irony of utilizing the elementals in such a manner is not lost upon me as this is not a symbiotic relationship. The people of the sky cities are simply using the elementals bound into their service to survive without providing anything back. This includes the aforementioned air elementals, but also earth elementals to grow crops, and water elementals as an ever filling water supply.

The people of the eponymous Cloudsea are currently experiencing a magical and technological revolution in which anyone with the money can buy magical extracts which grant them power and those who can afford it or have sponsors can purchase airplanes, which are a new invention in the setting and utilized by the people for both combat and exploration purposes such as diving into the radioactive Cloudsea. What makes the book interesting is that it is completely narrated by one of the primary villains of the setting, presenting an unreliable narrator who has their own biases as they are in the upper echelons of society and desperately want to keep the power they have gathered for themselves. So readers have to have a critical eye as to what may be truthful and what is just propaganda.

EGG: Beyond humans and gnomes, you’re adding other new ancestries. Why ratfolk, nymphs, and androids?
MIGUEL: Well that question is relatively interesting. I wanted to have at least one or two familiar races so that people who didn’t know anything about the setting could latch onto something familiar. Humans obviously made for a good starting point in that regard. Gnomes too, are familiar, though I feel like they are not necessarily what people jump to when they think of a ruling overlord type of race, which always seemed odd to me because of their magical superiority in many regards make them quite powerful in a society where magic is commonplace. But to answer your question about the other races. Ratfolk were included because I am particularly fond of them and the lore they were given within a space-faring roleplaying game. I’m not exactly sure if I’m allowed to name drop it, but I can definitely say that my love for them in that game made me want to include them in another context where they are given quite an important role to play.

Nymphs were a natural fit as well, though for a different reason. The abuse of the elementals within the setting made it clear that I wanted there to be an environmental message present within the game and nymphs are often seen as the personification of nature. The exact type of nymphs here are called nimbus nymphs as they are those which once made their homes in the clouds. However, after the Cloudsea appeared, and there was no more water to evaporate in order to make clouds, they became a regular part of the setting. Part of their story is wanting to regain what they have lost with time and the destruction of nature, as they want to soar the skies like their ancestors did but can only do so through the use of airplanes, ironically adding to the problem of the abuse of nature.

Finally, there are the androids, which are perhaps the most key ingredient to making Cloudsea what it is in terms of story beats and motifs which parallel real world problems. They are a race that is regularly abused and have no clear way to fit into the setting, with the entire system working against them even as the very same system says that it is trying its best to fit them into society. There is casual racism thrown at them, and to be honest, I added them into the setting because at the end of the day, I carry the legacy either directly or indirectly as a person of color, that I wrote out for the androids. 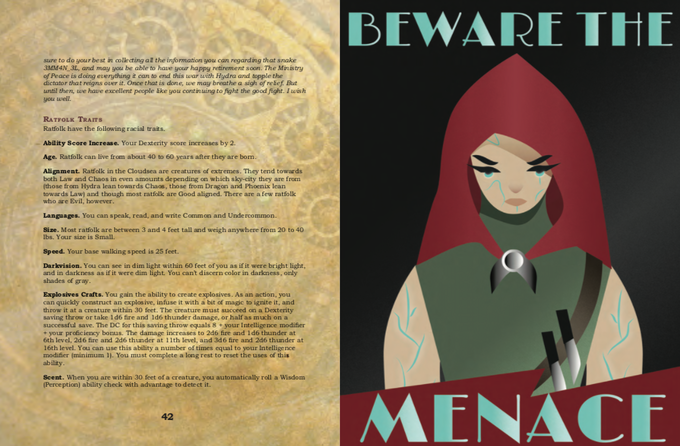 EGG: With its antiquated social norms, why choose to base your fantasy setting on the Roaring 1920s?
MIGUEL: That would seem strange, wouldn’t it? The 1920s were rife with bigotry of all forms. Homophobia, sexism, racism, transphobia. You name it. But that’s also what makes the setting so important. Because of that bigotry, we cannot turn a blind eye to it which is part of the reason why I decided as a queer Latinx writer to write about some of the troubles faced in this part of history. Now I must say two things about this: the first is that I focused on racism over other forms of bigotry because although I stand against it all, it is the one form of bigotry that I can as a person who has lived through it best write about. That’s why the main theme of Cloudsea is racism; I cannot in good faith write what it would have been like for a woman living during that time period. I understand that this in some ways softens the impact of the bigotry that should by all rights be present within Cloudsea, however, as a writing team of one, I had to focus on what experiences I could with good credibility speak to.

The second bit of this is that I was a bit anachronistic with my depiction of racism within Cloudsea, not wanting to solely focus on the bigotry faced at the time, but also social ills such as the Red Scare and tying it to race as there were many who were unfairly targeted during this time because of their race. There is also an element of something I’ve heard called the bigotry of low expectations, especially in the writing of the androids. They are “accepted” into society within the Cloudsea, but also seen as inferior and not able to do the same things other races can. At the same time they must deal with rampant racism and fear mongering about them replacing the “normal” folks in society. These forms of racism are all things I’ve experienced through my life. The idea that because I am Latinx I can’t do things white people can. The idea that because I got into college on a scholarship that I was replacing a white student. Openly being called slurs to my face and having to brush it aside because I don’t want to perpetuate the stigma of an angry brown person. That is why I chose the 1920s. Because it allows me to explore all this and more. 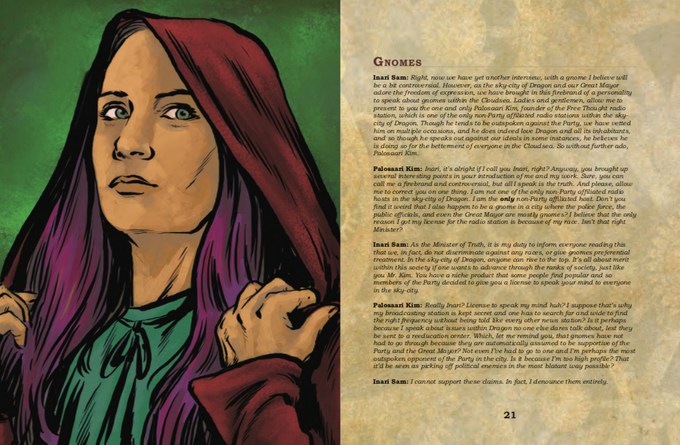 EGG: That is a well thought out and poignant reason to address this. Thank you for sharing that. I’m going to turn away from the setting and ask what else are you working on?
MIGUEL: Thank you for asking! I am currently working with Legendary Games on quite a few different projects, most notably the Latin American Bestiary, which Jason Nelson has shared quite a bit on as well as a project called Boricubos, which is a setting that I wrote, also for Legendary Games based on Taíno culture, which is important to me because that is where some of my heritage lies. Unfortunately I can’t say much more as more hasn’t been released to the public yet, but I will say Jason Nelson has been great about incorporating Latinx writers and artists into these projects, so I admire his dedication to keeping open communication with the communities that these products represent. He truly cares about getting ideas and work from people whose cultures are going to be represented and at the end of the day I can call him a true ally.

Cloudsea: A 5th Edition Primer to Living Atop the Clouds from Beyond the Horizon and Miguel Colon
Egg Embry participates in the OneBookShelf Affiliate Program and is an Amazon Associate. These programs provide advertising fees by linking to DriveThruRPG and Amazon.
Click to expand...

Off and on I map out this idea…do you HAVE to live in the sky (why?) or just want to…? Are your boats propelled by dragons, do they float? Are there adventuring crews, do you have a captain, do you let a player be one…?

it’s easy to see why my version of this is a sketch and not a saleable product. But I’m very drawn to the idea that a group could collectively decide what type of aeronautics system they want to game with, and the resource they consult would be just that open-ended.

Legendary Games, What They Produced and Learned in 2021, and 2022 Plans