Commentary thread in that “Describe your game in five words” thread.

Cause I love the beauty of the five word model and dint want to break it by commenting on posts there I’m making this thread!

Cancelled: GM (me) Depressed... The depression was due to then-impending now-accomplished medical imaging. So y'all don't worry - I'm not depressed to self-harm. I'm fairly well medicated. I do have bipolar disorder, and it sometimes (despite meds) results in a non-functional day due to one...

Several of my posts refer to the same game. But different “looks” based on all that happened. Anyone else do this? Acceptable?

What game? What adventure? Sometimes I’m in the mood for super detailed room crawling.

darjr said:
Cause I love the beauty of the five word model
Click to expand...


Five words is a bit too restricted and condensed, really.

I think it'd be better as a haiku.

[Fantasy AGE] Tropical Island, part II. After surviving an attack by six giant lizards the dwarven warrior, dwarven mage and human rogue continued following a river in search of the missing abbot they were hired to find. They arrived at a mountain with a stone staircase. After 3 hours of ascension they arrived at a plateau. They found a Machu Picchu like society of peaceful humans. They were greeted and lead to a zigurat near the centre of the town. At the top they found the abbot studying star charts with the local priest. When the abbot saw the PCs he was surprised. He explained he was perfectly happy with these people and didn't need rescuing! (the faces of the players, priceless

The abbot wrote a letter and named Egil as his successor. He gave a gold ring with a ruby to the PCs for their effort. He also gave a magical cape to the mage (+2 def) claiming he wouldn't need it anymore. 13 days later a sailboat took them back to Freeport. They went to the temple and announced to Egil his promotion, handing him the abbot's letter. Egil was saddened by the news but honored by the promotion.

As the PCs were preparing to leave Egil told them he had a letter for the Dwarven Warrior. It was a letter from his father, a noble from an important dwarven family. He is recalled to the kingdom for an urgent state mater. As a dutyful son he decides to return home. The dwarven mage and human rogue decide to follow. They also bring three human mercenaries who helped them in their early days in Freeport. 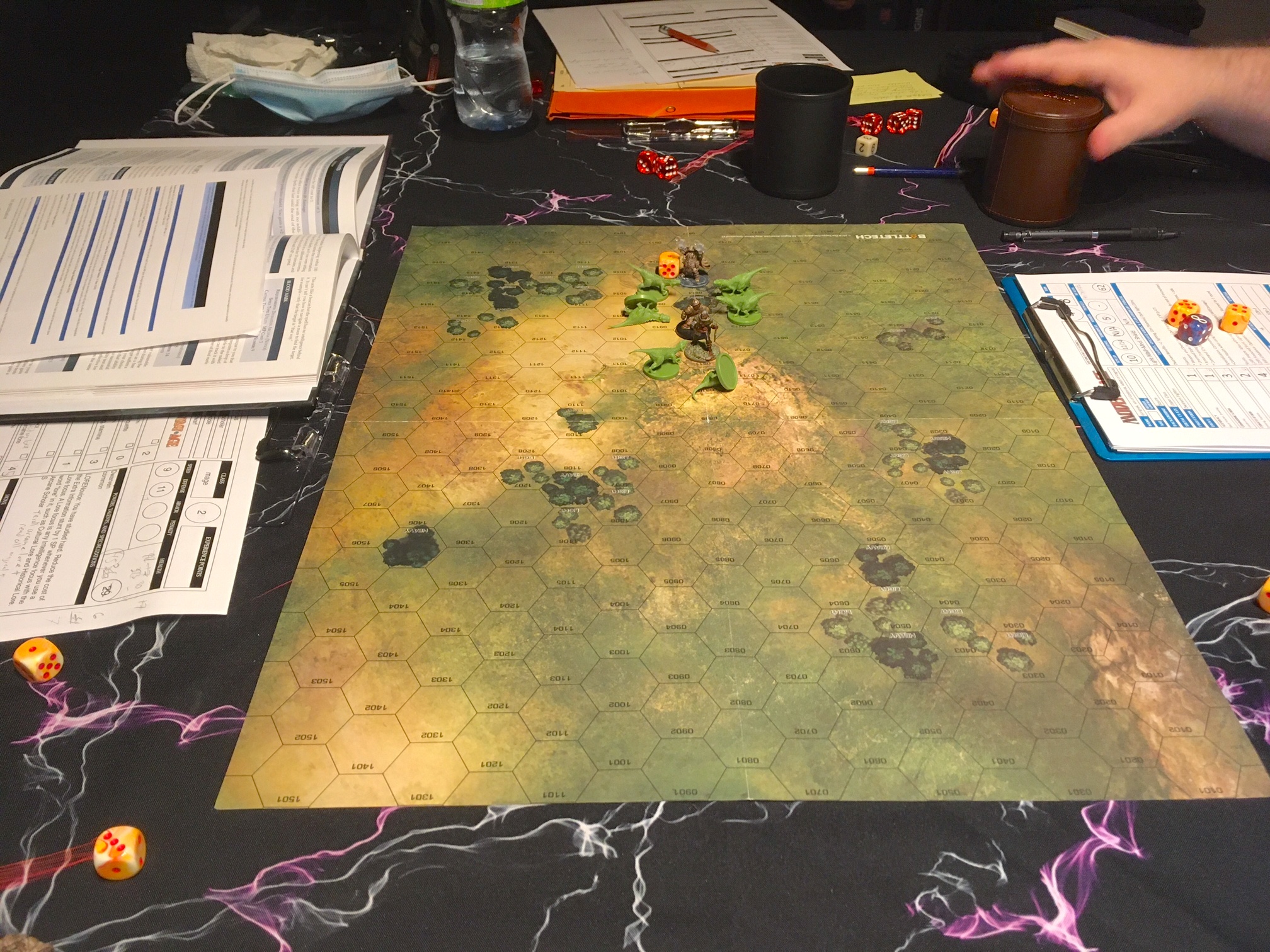 Umbran said:
Five words is a bit too restricted and condensed, really.

I think it'd be better as a haiku.

Awesome. My last session in haiku:

As we slew the beast,
How cursed Strahd taunted us!
Still, we leveled up.

Umbran said:
Five words is a bit too restricted and condensed, really.

I think it'd be better as a haiku.
Click to expand...

I like this idea
but haiku can be daunting--
"Arrrgh! The syllables!"[*]

especially if you want
to start a complete renga

A random encounter? We hide.

The PCs are traveling right now. They’ve had 5 random encounters come up in 2 session - they hid from three of them. They are keeping a LOW profile as much as they can - but for no particular reason. They really just wanna be subtle.
Last edited: Sep 20, 2021

darjr said:
Several of my posts refer to the same game. But different “looks” based on all that happened. Anyone else do this? Acceptable?
Click to expand...

You two planned this? Didn’t you?

I'll do one post with Haikus for my different campaigns


My Eberron campaign's main plot revolves around a concept that I made for Eberron; The Hearts of the Progenitors. Basically everyone that knows the basic concept for Eberron knows the legend of the Progenitor Dragons; Eberron, Siberys, and Kyber, so I'm not going to go into all that. Basically, in my Eberron campaign, the "spirits" of these Progenitor Dragons, every few thousand years, choose an elephant-sized dragonshard that corresponds with their identity to become their "Heart" (so Siberys's spirit chooses a Siberys Dragonshard, Eberron's chooses an Eberron Dragonshard, and Khyber chooses a Kyber Dragonshard). These dragonshards are even more powerful than the typical dragonshard of the same size (which are already very powerful), and have an enhanced ability to channel their will and power to influence the Draconic Prophecy. For example, when House Cannith got their hands on the Heart of Siberys (which fell from the sky at the beginning of the campaign), they were able to automatically enhance their dragonmarks to Greater Siberys Dragonmarks using a powerful Eldritch Machine. They eventually discovered that they could transfer their souls into the bodies of Warforged and were even able to retain their dragonmarks when they did so with this Eldritch Machine, which they named the Fate-Weaver.)

The first two Hearts that the players discovered (without knowing what the Hearts were or their powers) were the Heart of Siberys (which fell from the sky in the Shadow Marches, they claimed for themselves, and then they sold it to House Cannith for 5 million gold pieces) and then the Heart of Khyber (which they just wandered across while adventuring in the Shadow Marches. And, no, the fact that these two Hearts were in the same "country" wasn't a coincidence. I had it explained that they were basically like opposite sides of a magnet, attracted to each other as the Heart of Siberys was knocked from the sky). When the players eventually discovered what the Hearts of the Progenitors were, they set out to find the Heart of Eberron before trying to reclaim the Heart of Siberys and then retrieve the Heart of Khyber (which had the spirit of Rak Tulkesh trapped inside it).

There was also a major side-plot involving the cause of the Mourning and one of the character's backstory. Long story short, Lady Illmarrow made a deal with the Dark Powers of Ravenloft, who used the Mists of Ravenloft to cause the Mourning (the Mists of the Mourning are actually the Mists of Ravenloft). Lady Illmarrow made this deal because as the Last War stretched on, Rak Tulkesh was getting even more power, and almost had broken out of his prison. So, in order to prevent his escape, Lady Illmarrow killed everyone in Cyre, turned the country into a wasteland, and then kept her involvement in it a secret. (She didn't do this as some act of twisted mercy, either, it was purely self-preservation and for her own purposes. She wanted to become the Goddess of Death, and she couldn't do that if Rak Tulkesh destroyed the world.
Spelljammer Campaign:


The Illithids are coming back from the future where they destroyed the universe, but the players have a warning of a year. They have to plot to somehow stop this invasion of thousands of Illithid Nautiloids and Squid Ships, and so they resulted to Time Magic to give them more time. They eventually decided to trap them in a Crystal Sphere, using an Epic Level version of Imprisonment, and delay their conquering of the multiverse.
Icewind Dale Campaign:

End the endless rime,
Netherese ruins and magic
Shall release us all.

Haiku for the recent developments in Lancer: Battlegroup.

@Tun Kai Poh, I'd love to hear an explanation of your latest (fabulous!) 5-word post:

uzirath said:
@Tun Kai Poh, I'd love to hear an explanation of your latest (fabulous!) 5-word post:
Click to expand...

Note: Pretty much, as well, a silent slogan for the original play-testers of D&D.

uzirath said:
@Tun Kai Poh, I'd love to hear an explanation of your latest (fabulous!) 5-word post:
Click to expand...

I ran As Good As A Feast, a Cthulhu Dark scenario written by Mo Holkar. It's a Kickstarter exclusive for backers of the Cthulhu Dark "big book" (which I reviewed a while ago).

The players of my online game (Danial and Doug) were members of an Oklahoma farming family fleeing the Dust Bowl drought crisis in 1935, hence the Grapes of Wrath reference. On their way to California, they visited the prosperous farm of their relative Uncle Jack in the foothills of Northern Arizona. But Jack had gone missing, and the sinister source of the bountiful crops lay beneath the nearby ghost town of Plenty. Alfred, the family patriarch, and his daughter Laura-Jane (who wants to become a movie star) set out in search of Uncle Jack.

The scenario is more creepy atmosphere and gradually growing dread than it is jump scares. Although Danial got a surprise jump scare when the thunderstorm fried his power supply just as we were getting to the climactic revelations, and had to log back in by smartphone!

At the very end, with both characters severely affected by hunger and the tempting visions of an eldritch entity named Edom, the investigators entered the abandoned gold mine where Jack had entered. After descending deep into the earth, they found a "stone bubble" that miners had uncovered long ago. Inside, Edom manifested gleaming fruits to tempt the hungry travellers. Doug's character Laura-Jane failed her Insight roll for the last time, reaching the maximum score, which meant that her mind was lost to the horrific knowledge of the Mythos.

But since Laura-Jane was more tempted by stardom than food, we played out the scene with the girl seeing the little strawberry people cheering her on, her adoring fans, asking her to come forward to accept her Academy Award... The player really leaned into it with great gusto, with Laura-Jane bowing and smiling and giving her acceptance speech to the strawberries. It was surreal and hilarious, and just like that, Laura-Jane was absorbed by the bubble and taken for Edom!

(Alfred rescued her later and they escaped, but it was still a great scene)

I thought I should give some commentary on the '15 fireball' post I made recently.

Our party chased a cultist through the city, upon capture he pulled out a necklace of fireballs with 15 beads (the DM said he rolled a d20 to see how many there were) and set them all off at once in an attempt to take us with him.

We were given one action in order to save ourselves from the blast (Even at level 10, no one would have survived)

I used 'meld into stone', but two other party members would have been toast if the cleric didn't manage to get off a banishment.

Describe your last RPG session in more than 5 words.
2