D&D 5E CoS: Running Strahd without relying on Charm

Supporter
My group is about to face Strahd in Curse of Strahd. They have the Sunsword and the Holy Symbol of Ravenkind. Their designated meeting place is the Overlook. Ireena is with the group and being played as a PC.

It's a large group (8 PCs). I am planning to use this souped-up version of Strahd with three different phases/forms. I am also planning to have Rahadin fight alongside him, and probably some other backup as well--maybe some animated armor, since they wouldn't be affected by the Sunsword.

I'm still worried that Strahd is going to go down way too fast, especially with the Sunsword. I've been looking up various strategy guides for running Strahd, but nearly all of them recommend making extensive use of his charm abilities to turn the party against one another. The problem with that approach is that we have a bard in the party who does nothing but spam calm emotions, so I can't count on that to work, or if it does work briefly, not for long.

Does anyone have advice on other good ways Strahd can affect the group besides using charm a lot?

If he fights inside his castle, he's virtually unkillable because he can
run into walls, wait to regenerate to full, then do a "hit and run" tactic of spells or hits. If you try and rest, he'll simply summon everything he's got to harass you. Want to rest in your force-field hut? Try resting with incessant noise all 8 hours.
Outside his castle, for a group of 8(!) PCs, at the appropriate level, he's cannon fodder. Action economy will win the day. He simply doesn't have enough Actions to make a dent.

Tactically, charm is not a viable combat action, especially with 8 PCs. It's wasteful and generally meant for out-of-combat encounters. No clue how the DMGuild product would affect the combat, so no comment there.

As a former general who didn't make mistakes, I'd tend to think Strahd has planned his battlefields long ahead. After all, he's had centuries to do so. He's not going to surrender his "high ground" advantage, aka his special ability above. When I ran it, the PCs couldn't beat the tactic. They were being worn down. But, the key to beating Strahd was not in getting better weapons (which is the module's solution). Rather, his journal, an oft-ignored piece, was the beginning to understand him. After all, why was it ever part of the fortune telling if it didn't actually serve any real purpose?
His obsession is his undoing. He's patient and eternal. He doesn't need to fight the PCs. He can simply outlive them, wait for another generation of Ireena/Tatyana, and start over. Eventually, he figures he'll succeed. But, that moment of failure historically has enraged him beyond reason. He wiped out an entire village because they hanged a Tatyana reincarnation. He wiped out all the female elves in the land because he was thwarted. In my game, Strahd wore Ireena down until, one day, the Abbott took her face (left the rest of her alive, after all, he's a good guy speaking with the gods) for his Bride, figuring he'd kill two birds with one stone by removing the competition and giving Strahd the looks he wants. At this point, Ireena gave up, and she was Strahd's for a time. Strahd made her his bride and gave her a new spot in his crypts. My PCs reasoned that if he lost Ireena, like all the other times, he'd hopefully lose his mind and stop his cold, calculated tactical approach of hit and run. And, he did. After that, the Sunsword took care of him in a couple rounds.
Don't be afraid to have Strahd use his tactic. Don't be afraid to make this battle a killer one as a result. There's provisions for the PCs to lose and be taken captive. Maybe he needs them to convince Ireena. And remember, right now, that's #1 in Strahd's life. History is repeating itself for him. Nothing else matters, not even these new "toys" the Land has given him. The overlook is where Tatyana threw herself into the Abyss. If the PCs have done all their homework (and the DM has placed nuggets around the land), they'll understand this.

Ultimately, he's not a "fight to the death" guy. He doesn't have to. He's seen generations come and go. He'll see them return to the earth and his quest will go on. He controls the Sun, the weather, and all lives in his prison realm. So, treat him like a puzzle with an invincible tactic that needs to be solved first. The PCs need to make him stay. There's only 1 thing that could do that, and it's not taunts from a bunch of nobodies who took off the training wheels a few months ago. It's far deeper.

Anyhow, that's how I'd work it.

If Stradh can turn himself into mist (no copy of CoS handy so this is from memory) he can move around despite any barrier the PCs set up to contain him. He can go through the cracks under / around the doors.

Stradh should hit-and-run, concentrating magic ranged attacks on anybody trying to melee him with the Sunsword. He will think like a cavalry officer - speed and reach and flanking - not like a "knight in armor" heavy infantry up in your face.

If the group is outside on the Overlook, he will be determined to get "Tatyana" back inside, away from the edge. That just happens to help with the tactics described above.

Strahd’s abilities make him ideally suited for hit and run tactics. A fight against Strahd should be as much a fight through his castle as it is a fight against him.

In my experience, in every incarnation of the module, once the PCs have both the sword and the holy symbol, fighting Strahd is a cakewalk. I would expect the PCs to pretty much ROLF stomp all over Strahd at this point unless he can somehow arrange to steal those particular items.

My party fought Strahd on the Overlook - try grappling a PC and throwing them off the edge.

I wasn't feeling sadistic and did it to a character who could fly - you, of course, don't have to do that. 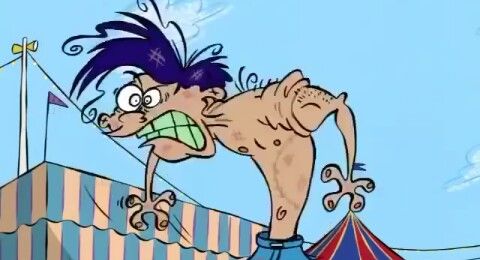 Personally, I was picturing a new, really aggressive form of deep muscle massage.

I’d start by taking his hit points and dividing them by four. Base assumption of 5E monsters is a party of four. Then multiply that number by however many PCs you have. Now he’s got the right amount of hit points for your group. Next give him as many actions per round as there are PCs. Now the action economy of 5E is fixed, so he won’t simply be swamped by multiple attackers. Then watch Matt Colville’s Action-Oriented Monsters video. It’s pure gold. The short version is: give him cool reactions to use, cool bonus actions to use, and give him different cool scripted actions that go off every round.

ETA: also, do what toucan said.

Strahd is cunning, and if he's been keeping tab on the party, he knows the Bard and whoever has the relics will be his bane. He could very well focus his attention on ridding himself of the Bard to make it easier to turn the party against each other. Luring the PCs into traps or minions (perhaps a sticky-fingered Cyrus) who can relieve the party of the artifacts, force them to use the item's limited abilities up before he arrives or simply seek to deprive the party of the items would be smart tactics.

Furthermore, Strahd should do his best to control when and where his interactions occur with the PCs (outside of the "Grand Finale" location from the Tarrakota). I generally had him show up at the tail end of other fights while the party was otherwise occupied or a bit beaten up, take a swipe or two at an isolated or otherwise alone PC, then depart. Several cases of him dropping a fireball, lightning bolt or cloudkill then leaving cackling as he did so to lure the party into following him into one of the castle's traps or deadlier minions.

MGibster said:
In my experience, in every incarnation of the module, once the PCs have both the sword and the holy symbol, fighting Strahd is a cakewalk. I would expect the PCs to pretty much ROLF stomp all over Strahd at this point unless he can somehow arrange to steal those particular items.
Click to expand...

If Strahd sticks around, it's supposed to be a cakewalk. These are bane items to him.

I prefer to modify my bosses to be like puzzles, with layers to solve and defenses to strip away, rather than just another battle, as a few lucky dice rolls can render what should be an epic finale into a joke. Hence my suggestion that no-way, no-how, would he ever stick around to face anyone with those bane items...unless he's lost all reason and self-control.

Lots of good points already so I'll take a different tack. This is the end of the campaign, right? Strahd dies tonight, right? All the players are pumped, right? So it's your job as DM to ensure that either the PCs win or they lose. No "We'll continue this next session." because that's anticlimactic. How you do that depends upon your group.